Where Have All the Progressives Gone? 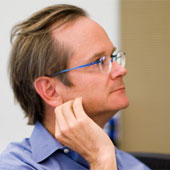 Lawrence Lessig is the director of the Edmond J. Safra Foundation Center for Ethics and a professor of law at Harvard University.

We were here at least once before. A hundred years ago, America had an extraordinary political choice. The election of 1912 gave voters an unprecedented range of candidates for president of the United States.

On the far right was William Howard Taft, the “stand pat” Republican, who had served as Teddy Roosevelt’s secretary of war, but had not carried forward the revolution on the right that Roosevelt thought he had started.

On the far left was Eugene Debs, the most successful socialist candidate for president in American history. Debs had run for president twice before. And he who would run again — this time from prison, in 1920 — and win the largest popular vote that any socialist has ever received in a national American election.

In the middle were two “Progressives.” One was the immensely popular former President Teddy Roosevelt, who had imposed upon himself a two-term limit, but then found the ideals of reform that he had launched languishing within the Republican Party.

And there was New Jersey’s governor and former Princeton University president Woodrow Wilson, who promised the political machine-bound Democratic Party the kind of reform that Roosevelt had begun within the Republican Party.

These two self-described Progressives were very different. Roosevelt was a big-government reformer. Wilson, at least before the First World War, was a small-government, pro-federalist reformer.

Each saw the same overwhelming threat to America’s democracy: the capture of government by powerful special interests — even if each envisioned a very different remedy for that capture.

Presidential re-election campaigns are not supposed to be bloody political battles. But Taft had proven himself to be a particularly inept politician (he was later a much better chief justice of the Supreme Court). After Teddy Roosevelt’s term had ended in 1908, business interests had reasserted their dominant control of the Republican Party.

Despite Taft’s ineptitude, and although dissent was growing across the political spectrum, few seemed to doubt that he would be re-elected. Even Roosevelt felt certain enough of that to delay any suggestion that he would enter the race to challenge his own handpicked successor.

A Wisconsin Republican changed all that.

The rise of the Progressives

In January 1911, Senator Robert La Follette and his followers launched the National Progressive Republican League. Soon after, La Follette announced his own campaign for the presidency.

Declaring that “popular government in America has been thwarted… by the special interests,” the League advocated five core reforms, all of which attacked problems of process, not substance.

The first four demanded changes to strengthen popular control of government (the election of senators, direct primaries, direct election of delegates to presidential conventions, and the spread of the state initiative process). The last reform demanded “a thorough going corrupt practices act.”

La Follette’s campaign initially drew excitement and important support. It faltered, however, when he seemed to suffer a mental breakdown during a speech at a press dinner in Philadelphia.

But the campaign increasingly embarrassed the large faction of “stand pat” Republicans. As Roosevelt would charge in April 1912:

The Republican Party is now facing a great crisis. It is to decide whether it will be, as in the days of Lincoln, the party of the plain people, the party of progress, the party of social and industrial justice; or whether it will be the party of privilege and of special interests, the heir to those who were Lincoln’s most bitter opponents, the party that represents the great interests within and without Wall Street which desire through their control over the servants of the public to be kept immune from punishment when they do wrong and to be given privileges to which they are not entitled.

The term progressive is a confused and much misunderstood moniker for perhaps the most important political movement at the turn of the last century. We confuse it even today with liberals.

But a hundred years ago, there were progressives of every political stripe in America — on the left and on the right, and with variations in the middle (the Prohibitionists, for example).

The common thread that united these different strands of reform was the recognition that democratic government in America had been captured. Journalists and writers at the turn of the 20th century taught America “that business corrupts politics,” as Richard McCormick put it.

This was corruption of the grossest form — the sort that would make convicted lobbyist Jack Abramoff wince — and it was increasingly the norm throughout too much of government in the United States.

Democracy, as in rule of the people, was a joke. As historian George Thayer wrote, describing the “golden age of boodle” (1876-1926): “Never has the American political process been so corrupt. No office was too high to purchase, no man too pure to bribe, no principle too sacred to destroy, no law too fundamental to break.”

Teddy Roosevelt put it this way in 1910: “Exactly as the special interests of cotton and slavery threatened our political integrity before the Civil War, so now the great special business interests too often control and corrupt the men and methods of government for their own profit.”

To respond to this “corruption,” Progressives launched a series of reforms to reclaim government. Many of these reforms were hopeless disasters (the ballot initiative and elected judges) — and some were both disasters and evil (Prohibition and eugenics, to name just two).

But mistakes notwithstanding, the Progressive Era represents an unprecedented moment of experimentation and engagement, all motivated by a common recognition that the idea of popular sovereignty in America had been sold.

That recognition manifested itself powerfully on November 5, 1912: Taft, the incumbent Republican, placed third (23.2%) in the four-man race. Debs, the socialist, a distant fourth (6%).

Teddy Roosevelt received 27.4% of the vote. All, however, were bested by the “new” Democrat, Woodrow Wilson, who received 41.8% and was elected president.

But only when you add together the votes cast for Teddy Roosevelt and Woodrow Wilson, the two self-identified Progressives in the race, do you get a clear sense of the significance of 1912: Almost 70% of Americans had voted for a “progressive.”

That means 70% of Americans effectively said, “This democracy is corrupted. We demand it be fixed.” Seventy percent refused to “stand pat.” A century later, we must fight the same battle again. But this time, there is no candidate who even gives us a choice.

Our government is captured by those who fund its campaigns, yet neither presidential candidate has even hinted at a plan to end that corruption. Instead, both “stand pat” with this system “of boodle.” And so will the corruption continue.

Editor’s note: This article is adapted from Republic, Lost: How Money Corrupts Congress — and a Plan to Stop It by Lawrence Lessig. Published by arrangement with the Twelve/Hachette Book Group. Copyright © 2011 by Lawrence Lessig. All rights reserved.

The term progressive is a confused and much misunderstood moniker. We confuse it even today with liberals.

A hundred years ago, there were progressives of every political stripe in America — on the left and on the right, and with variations in the middle.

Our government is captured by those who fund its campaigns, yet neither presidential candidate has even hinted at a plan to end that corruption.

Lawrence Lessig is the director of the Edmond J. Safra Foundation Center for Ethics and a professor of law at Harvard University.

The term progressive is a confused and much misunderstood moniker. We confuse it even today with liberals.

A hundred years ago, there were progressives of every political stripe in America — on the left and on the right, and with variations in the middle.

Our government is captured by those who fund its campaigns, yet neither presidential candidate has even hinted at a plan to end that corruption.