Do Americans — who have a conflicted attitude toward government — realize the economic power that Abraham Lincoln wielded? 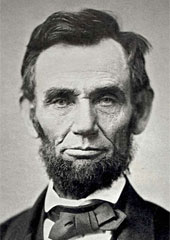 Abraham Lincoln was the real architect of the unprecedented global colossus of Industrial America. He pushed through and shaped the laws that allowed industrial and financial corporations to organize on an unprecedented scale. He provided them with more security from interference by government than private enterprise had ever before enjoyed in human history.

Lincoln held the United States together through an unprecedented shedding of blood. Then he tied it together with literal bonds of steel. He pushed through financial incentives for private companies to build railroads that united the continent. This made continental-scale trade possible for the very first time.

European countries did not offer anything comparable to the financial and land grants Lincoln offered the new railroad corporations. It took Russia nearly 40 more years to build its first transcontinental railroad. Lincoln gave the United States a 40-year head start on Russia.

Lincoln believed in industry over agriculture. He also believed in the primacy of manufacturing over the mining and basic commodities sectors in order to strengthen the future economy of America. He encouraged technological innovation, invention and the practical application of science to business and war in every way he could.

In his four short years as president (Lincoln was elected twice but was assassinated at the beginning of his second term), he transformed the Union from a huge agricultural “empire of liberty,” half dependent on slave labor, into the world’s industrial giant.

We think of Lincoln as a saintly hero — a gentle beloved male version of Mother Teresa in the White House. This vision of Lincoln is a relatively modern one, owing a great deal to Carl Sandburg. But Sandburg was a terrible historian and a shameless hagiographer. He distorted the real life of a great American leader to produce a childish caricature of reality.

Hailing from Chicago, Sandburg found his true calling as a highly touted biographer of Lincoln. He painted Lincoln as a suffering saint of the prairie. Subsequently, it has been difficult for ordinary Americans to think of the Great Liberal Emancipator in any other way.

Sandburg’s achievement was extraordinary. Even after 80 years, the image he painted of Lincoln continues to define him for the American public. His clichés still blot out the lessons to be learned from the continuing flood of genuinely first-class scholarship about Lincoln’s life.

Steven Spielberg’s Oscar-nominated movie does much to provide a far more realistic and nuanced portrait of Lincoln, the wily politician, the caring man — and the human being riddled by doubt.

But even with that major refinement in our understanding of the 16th President of the United States, the real Lincoln still continues to hide in plain sight from the American people. This development would have given him wry satisfaction.

The real Lincoln was no Suffering Servant of Isaiah 53. He suffered, but not as a servant. He was not religious in any conventional sense.

Lincoln’s skepticism was well known in his home community in Springfield, Illinois. In 1846, he turned up at one Sunday morning church meeting to campaign for support in his first election to Congress (and the only one he ever won.) The clergyman holding the meeting was fulminating on the horrors of the fires of Hell that awaited unbelievers.

Seeing Lincoln, whose skepticism he knew well, the minister asked, “And where do you think you’re going, Mr. Lincoln?” “I don’t know where you’re going, Reverend,” Lincoln replied. “But I’m going to Congress.”

Lincoln was passionate in his genuine abhorrence of chattel slavery, but he was no pacifist. He wasn’t gentle in his conduct of the national affairs of the United States. He also wasn’t into forgiveness of those who crossed him or failed him. Although he issued many pardons, he also approved military executions of deserters from the Union Army.

There was no disagreement between Lincoln and the Radical Republicans in Congress over the need to impose a harsh peace over the conquered South in 1865. His proposed peace behind his soft words was as harsh as theirs.

We all know who Abraham Lincoln was. But what was his significance to American history?

What was Abraham Lincoln? He was America’s Bismarck. Otto von Bismarck, chancellor of Prussia, Lincoln’s exact contemporary, won the respect and fear of the world because he fought and won three wars to create the new German Empire.

He boasted that he would unify Germany and impose his will on it by “blood and iron.” And he did.

Lincoln reunited America just as Bismarck united Germany. But Lincoln’s achievement was on an incomparably greater, far more terrible scale. More than three times the number of soldiers was killed in the U.S. Civil War than in the 1870-71 Franco-Prussian War.

Total fatalities in the war between Prussia and France were almost 185,000. Some 650,000 soldiers died in the Civil War. Lincoln also built up America as a far greater industrialized nation than Germany became in Europe.

Lincoln had a vision of a better America that would emerge from the war. Had he lived, Lincoln would have rejoiced in the rise of American industry. If Lincoln had lived to retire from the presidency in 1869, he might have sat on the boards of Union Pacific, Standard Oil or Carnegie Steel.

To prove this, we only have to look at what Lincoln did for a living.

Abraham Lincoln was a lawyer. But he was no simple, poor, champion of the “Forgotten Man,” the way legendary movie director John Ford portrayed him in “Young Mr. Lincoln” in 1939. That movie, starring Henry Fonda as the young Abe, is still watched today. It embraced Carl Sandburg’s picture of Lincoln.

The real Abraham Lincoln — that is, the real unknown Lincoln — was a very different kind of man. He was a respected appeals lawyer, a lawyer for the railroad and other enterprises, and became wealthy doing so.

But in 1854, he chose to speak out against the extension of slavery through the Kansas-Nebraska Act. Though unsuccessful in his subsequent bid for a U.S. Senate seat, he had acquired the taste for politics. He went on to change the nation — socially, politically and economically.

Editor’s note: This essay is adapted from That Should Still Be Us: How Thomas Friedman’s Free Trade Myths are Keeping Us Flat on Our Backs (John Wiley & Sons) by Martin Sieff. Published by arrangement with the author. Copyright © 2012 by John Wiley & Sons.

Lincoln transformed the country from being half dependent on slave labor into the world's industrial giant.

Lincoln encouraged innovation, invention and the practical application of science to business and war.

Who was Abraham Lincoln? He was America's Bismarck.

Lincoln transformed the country from being half dependent on slave labor into the world's industrial giant.

Lincoln encouraged innovation, invention and the practical application of science to business and war.

Who was Abraham Lincoln? He was America's Bismarck.

A Brief History of U.S. Defaults