Why would emerging countries copy the unhealthy eating habits of the West, when their own tradition is so much healthier? 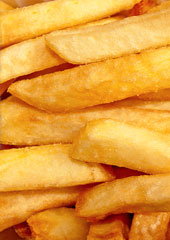 In the age of globalization, there is no excuse for it. In an age when Asia can more than hold its own economically, no one can argue that the spirit of the times is such that Asia should simply seek to mimic the West’s, especially the United States’, dietary practices.

Certainly not when the price to be paid for that mimicry is massive obesity — of the young and of society at large.

To be sure, the image of Indians and Chinese fattening themselves up is not a case of Western culinary imperialism. That statement holds, even though the sales tactics and psychologies of the McDonald’s and Coca-Colas’ of this world certainly play a part in Asia’s worsening obesity problem.

But at a time when educated Westerners, far too late, have finally come around to seeing the wisdom of India’s vegetarian path to nutritional enlightenment, it is sad to see that the world’s two most populous nations are moving in the opposite direction.

The quest of China and India in this regard is not so much one of demanding equal rights in terms of caloric consumption. Nor is it a matter of denying them a meaty future for environmental, resource-consumption reasons.

All that it requires is for Asia to hold its head up high and remember some of its best traditions. A healthy, not grossly fattening diet is certainly something to be proud of and to hold on to.

Anybody who argues that it is a matter of global fairness for a billion Chinese and a billion Indians now to gorge themselves on factory-produced pork, poultry and beef is really delivering an argument for self-mutilation on a massive scale — leaving aside the climatic and planetary consequences of such a shift in the composition of the world’s diet.

Ironically, what is considered a sign of Western wealth — overloaded food tables — is a sign of a breathless lifestyle where the real values with regard to ensuring a solid quality of life for oneself have gotten buried.

The biggest nonalignment movement in the world’s history ought to be launched by the developing countries now. They should declare their nonalignment to sugary and salty foods, fatty foods, and almost all fast foods.

There is a sickening addiction to foods with excess sugar (particularly high-fructose corn syrup) that are pervasive in all kinds of foods and have a deleterious effect on people’s health, particularly children.

On this crucial front, the Food and Drug Administration should become much more assertive. The FDA is a branch of the U.S. government, but it could exercise a true form of global leadership — one that would be very welcome around the globe and strengthen the U.S. reputation for decades to come.

But for that to happen, it would, at long last, need to stand up to the fast food giants — just as it did (slowly at first, but then decisively) with the tobacco companies.

Standing up to these corporate giants would have tremendous benefits in the global fight against obesity. But as long as the FDA is shying away from what it ought to be doing if it acted in good conscience and good science, it is illusory to believe that much weaker agencies (and governments) abroad could take on these firms.

The Coca-Colas and McDonald’s would just argue that even the world’s mightiest and best-resourced agency in the field — the FDA — has not spoken a final word on them.

Asian nations should learn from the West’s own painful lesson in how to combat heart disease and obesity-related diseases. The successful counterstrategy, in essence, is an embrace of the strategies and styles of Eastern nutrition.

It would represent the worst form of colonization — self-colonization — for Asia to copy the West’s modern food styles and intake regimes.

It is high time for Asians to reject the Western diet and its fatty, salty and sugary fast food and to embrace their own healthy dietary traditions.

If they need any reminder, it is this: True wealth in the West is enjoyed by those who have embraced many traditionally Eastern elements of life, with yoga just one of many elements of that equation.

The biggest nonalignment movement in the world's history ought to be launched by the developing countries now.

The worst form of colonization is self-colonization — by copying the West's modern food styles and intake regimes.

True wealth in the West is enjoyed by those who increasingly embrace many traditionally Eastern elements of life.

The biggest nonalignment movement in the world's history ought to be launched by the developing countries now.

The worst form of colonization is self-colonization — by copying the West's modern food styles and intake regimes.

True wealth in the West is enjoyed by those who increasingly embrace many traditionally Eastern elements of life.

How Obesity Can Derail China’s Growth