Many women served on the Soviet front lines in Belarus as fighters, support staff and resistance. 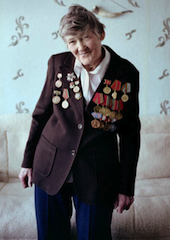 Credit: Agnieszka Rayss for The Other Hundred and The Globalist

In the photos below, photographer Agnieszka Rayss — in a selection from the book The Other Hundred — portrays women veterans of World War II, who are now living in Belarus. Rayss says:

I was inspired by Svetlana Alekseyevich’s book “War’s Unwomanly Face.” The heroines of my story were all active participants of the war. All these women of different nationalities were fighting in World War II for their homeland.

The war was difficult for them. They were very young when the war had started (16-18) and they had to learn plenty of things necessary during the war. They were nurses, truck drivers, worked in communications and were partisans.

Most of them went to the [Soviet] army as volunteers to defend their homeland. They had to fight and to share difficult living conditions with men soldiers.

Soviet and post-Soviet propaganda didn’t forget about them. They were given medals and prizes and declared “Heroes of the Nation.” They looked strange surrounded by men heroes but there was an equality of men and women in the USSR so no one could forbid them to be heroes…

Now the old ladies I met are at the end of their lives. Belarus is their home. A lot of them miss the Soviet Union.

The pictures below were captured in Belarus in 2011.

Galina Ivanova Pagarelava of Shchuchyn, Belarus, served as a nurse in the war. She describes her experience during and after the war:

“I was a nurse and I got into the front-bound ambulance train. I was at the front, I collected the wounded and drove them to the hospital. They were heavy, one had to carry them on one’s own arms and back. When we took the wounded away we were often bombarded by the Germans. We had ‘death passports,’ metal tags with our name and last name to identify us in case we were killed.

This is how the four years of war went by. I was at the Leningrad front, the Baltic front and the Karelian front all the way beyond the Arctic Circle. It was daylight all the time at the Arctic front. We wrote letters on the train — at night.

Belarus is my second homeland. I was born in the Ural, I have lived in Shchuchyn since 1954. I have no regrets. My son turned out great. I had an interesting life, I used to go to Moscow, to the sanatorium.”

Maria Antonovna Pospielova of Zaskovichi, Belarus. She served in the partisan resistance force against the Nazi occupation. She summarized her experience with an illustrative vignette:

God gave me the courage to fight for the truth and I have never been afraid to speak the truth. I think that if someone is righteous, God sees it and protects him.

That’s how it was with me. When I was already in the partisan force I was walking alone through the woods and I got surrounded by a pack of wolves. I thought I wasn’t going to make it. I had a pistol with only two bullets. I climbed onto the trunk of a felled pine tree, crossed myself, and they finally left.

Above: Maria Antonovna Pospielova’s dress uniform with her military honors.

When Germany invaded the Soviet Union in 1941, most of these women were between 16 and 18. As they approach the end of their lives, and despite the breakup of the Soviet Union, their contributions are still remembered with invitations to attend parades and to visit schools to tell children about their experiences.

Agnieszka Rayss is a freelance photographer based in Warsaw, Poland.

Photo Gallery: When Germany invaded the Soviet Union in 1941, most of these women were ages 16-18.

Despite the breakup of the Soviet Union, the wartime contributions of these women are still remembered.

Soviet women of WWII: They were nurses, truck drivers, worked in communications and were partisans.

Photo Gallery: When Germany invaded the Soviet Union in 1941, most of these women were ages 16-18.

Despite the breakup of the Soviet Union, the wartime contributions of these women are still remembered.

Soviet women of WWII: They were nurses, truck drivers, worked in communications and were partisans.