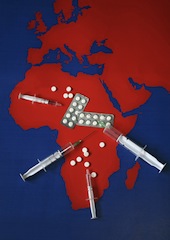 The drug industry is faced with two big challenges: First, declining prescription drug sales, especially in the United States, and second, losing patent protection for many profitable drugs. To make up for these down drifts, the industry is relying increasingly on new markets such as China and Africa. That expansion, however, is tainted by unsavory commercial practices.

The Economist Intelligence Unit projects $166 billion in drug sales in China by 2017, making it a natural market for companies looking for further growth.

In Africa, the size of the market is still small. However, the rapid growth of many big cities offers interesting opportunities for development. Pharmaceutical spending in Africa may reach $30 billion by 2016, from approximately $18 billion now.

According to the World Health Organization (WHO), Africa has 11% of the world’s population, yet it accounts for 24% of the global disease burden.

The rebound of the economies in several Latin American countries has made the region an attractive market as well for the drug companies. The Latin American market is estimated at $70 billion in sales.

Brazil, which is the largest market in the region, grew by 10% in 2010 and now generates sales of $26 billion, according to IMS Health, a company that provides information services and technology to the drug industry.

In China, relationships between doctors and patients are under stress. One reason is the unethical relations between many doctors and several drug companies.

Although the practice of bribing doctors is not new in China, recent demands for new and more effective measures against this practice have surfaced against some well-known drug companies. According to some estimates, up to 30% of the cost of drugs is kicked back to doctors to increase sales.

There are several ways in which drug companies bribe doctors. They range from making cash payments and all-expense-paid trips to presents for their families and even “sexual favors.” Drug companies also bribe hospitals to stock their drugs so that doctors can prescribe them.

Among the latest allegations is GlaxoSmithKline (GSK) staff improperly used cash and other incentives to boost the prescription of Botox in China. The British firm sells this substance under agreement with the patent-holder Allergan.

Allegations against GSK are not limited to China. In the summer of 2012, the company agreed to pay a $3 billion fine to settle criminal and civil charges with U.S. federal and state governments resulting from illegal activities carried out over 10 years. The British pharmaceutical group was accused of selling antidepressant medications in the United States for unapproved uses on children, concealing critical evidence from the U.S. Food and Drug Administration.

In addition to GSK, several other companies have been accused of rampant bribery, among them Eli Lilly, Pfizer, AstraZeneca, Sanofi, Novartis, Novo Nordisk and UCB. A former employee of Eli Lilly has accused the company of spending more than $490,000 to bribe doctors in China.

Over the last year, both Eli Lilly and Pfizer have been accused of making illegal payments in China. The Swiss drug maker Novartis was also accused of bribing doctors to prescribe its anticancer drug Sandostatin LAR.

In Africa, drug companies have been accused of testing dangerous drugs in children or conducting drug tests without obtaining informed consent. In Nigeria, a panel of medical experts accused Pfizer, Inc. of having violated international law during a 1996 meningitis epidemic by testing an unapproved drug for use in children. According to Nigerian officials, Pfizer’s illegal actions killed 11 children and left dozens disabled.

Pfizer never obtained authorization from the Nigerian government to give the untested drug to nearly 100 children and infants. Nigerian medical experts stated that an oral form of Trovan, the drug used in the test, had apparently never been given to children with meningitis.

Thirty Nigerian families whose children participated in the Trovan trial filed suit against Pfizer in 2001 under the Alien Tort Claims Act, to have the case heard in the United States instead of in Nigeria.

On July 30, 2010, Pfizer agreed to pay $75 million in a settlement to have the charges dropped. According to WikiLeaks, however, Pfizer allegedly conspired to have Nigeria’s attorney general drop the charges instead of having to pay up.

According to a report by Public Citizen’s Health Research Group in Washington, D.C., four companies (GlaxoSmithKline, Pfizer, Eli Lilly and Schering-Plough) accounted for more than half of all financial penalties imposed on drug companies in the last two decades.

In Latin America, drug companies have pursued an aggressive policy in the market. This policy has been harshly criticized because it translates into increasing prescription drug prices for consumers.

Getting into the crosshairs of Big Pharma

Given all these alluring business opportunities for profit-strapped pharma firms, it is important to recall a crucial bit of history. It goes to show that those politicians in developing countries who have the courage and sense of civic responsibility to oppose these policies are bound to pay a high political price for it.

Consider the case of Argentina. In 1966, Dr. Arturo Umberto Illía, who had been elected President of Argentina in 1963, was overthrown. Among the reasons were the limits he tried to put on the drug companies in Argentina. In 1964, the “Medicine Law” was passed, tightening regulations on the pharmaceutical industry. That law also granted the Ministry of Health the authority to control prices of basic medicines.

This law had also forced pharmaceutical companies to present to a judge an analysis of the costs of their drugs and to formalize all existing contracts. Impartial observers and people along the political spectrum believe that these restrictions alienated business interests and were decisive in Dr. Illía’s overthrow by a military coup.

Emerging markets offer exceptional opportunities for prescription drug companies’ development. That development, however, should happen in accordance with international norms and practices – and not only with the companies’ profit in mind.

Losing market share in the US, drug companies are relying more on China, Africa and Latin America.

Africa has 11% of the world’s population, yet it accounts for 24% of the global disease burden.

In China, up to 30% of the cost of drugs is kicked back to doctors to increase sales.

International norms and practices, not only profits should govern the companies’ activities.

Losing market share in the US, drug companies are relying more on China, Africa and Latin America.

Africa has 11% of the world’s population, yet it accounts for 24% of the global disease burden.

In China, up to 30% of the cost of drugs is kicked back to doctors to increase sales.

International norms and practices, not only profits should govern the companies’ activities.