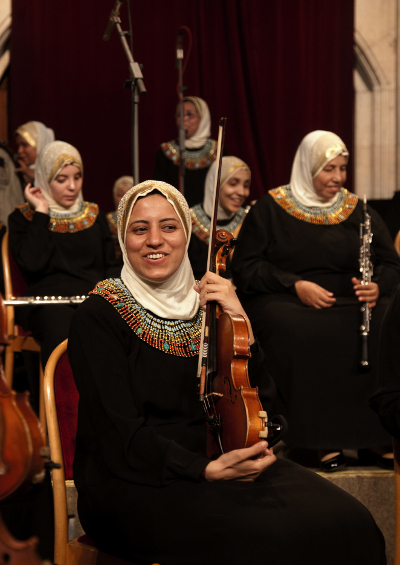 Credit: Nadia Sablin - The Other Hundred

Fernando Moleres is an award winning freelance photographer. Moreles often photographs stories related to human rights issues and current events. He approaches documentary photography as an art and instrument to help explore issues across the world.

The association was founded in 1954 and its name means light and hope. It gives the girls a formal education in the mornings, emphasizing literacy and vocational training, and teaches them music in the afternoons. Shaimaa entered when she was seven. In her first year, she was taught to read and write words and musical notes in Braille.

The following year, aged eight, she chose the violin as her instrument. She then spent five hours a day practicing and just one year later became a member of the association’s junior orchestra. At 12, she entered the senior orchestra, since then travelling with it across Europe, to North America and to Australia.

Unable to read music as they play, the orchestra’s musicians memorize it, typically carrying around 45 pieces in their heads at any one time, among them works by the Egyptian composer, Ahmed Aboeleid, and classical European pieces by Mozart, Brahms, Strauss, Tchaikovsky and others.

Text and photographs by Fernando Moleres

Enlarge   Members of the Al Nour Wal Amal orchestra take a break during a concert at the Manoel Theatre in Malta’s capital, Valletta.

Enlarge   Shaimaa on her way to vote in a national election. As well as being a violinist, she also has a university degree in English, which she teaches for a living.

Fernando Moleres is an award winning freelance photographer. Moreles often photographs stories related to human rights issues and current events. He approaches documentary photography as an art and instrument to help explore issues across the world.

Why Obama Is Right on Immigration