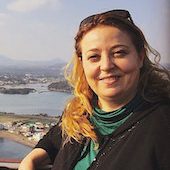 Laura Daverio is an Italian journalist, radio and video documentary maker based in Mexico City. She was previously based in China, where she lived for over 20 years.

Fluent in five languages, including Chinese and Spanish, Laura grew up in Milan, Italy and studied Chinese language and Far Eastern studies in Venice.

Laura has reported widely across Asia on major events such as the 2008 Beijing Olympics, the 2011 Tohoku earthquake and tsunami in Japan, the 2015 military parade in North Korea, underground churches in China, surrogate mothers in India and North Korean refugees hiding in northern China.

Among her notable video documentaries are “Dreaming in Tibet” about the exiled Tibetan community in India, “Life as Mao” on Chairman Mao’s myth through the lives of Mao Zeodong impersonators in China, “Forgetting Tiananmen” on the impact of the Chinese government’s efforts to erase the Tiananmen crackdown from public memory and “Survivors of Fukushima” on evacuees fleeing the nuclear disaster in Japan.

Since she moved to Mexico in 2018 her main focus has been China’s impact on Latina America and the Caribbean and migration both as a contemporary phenomenon, as well as from a historic perspective.

She is also covering a wide range of local topics including climate change, crime, infrastructure projects and the impact of Covid-19.

Laura was the recipient of a two-year scholarship at Beijing Language and Culture University in 1998 and a Knight Wallace Fellow at the University of Michigan in 2010.

The story of an Olympic competitor from Mexico shows the struggle against gender-based prejudice in sport.

The populist leader is still strong but may have to give up his goal of constitutional reform.

An official apology by Mexico’s President for the 1911 Torreon massacre of Chinese immigrants highlights China’s increasing clout in Mexico.