How can emerging economies be included in the fight against climate change? 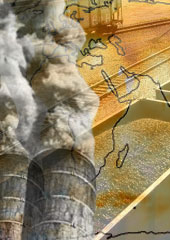 More than 15 years have passed since the Rio Earth Summit and the signing of the UN Framework Convention on Climate Change. Yet, greenhouse gas emissions are increasing more rapidly than ever before.

Meanwhile, negotiations on a post-2012 climate agreement are moving forward at a snail’s pace. Still, most people naturally put their hope in the ongoing negotiations within the UN as the only realistic way forward to reach both an inclusive — and effective — agreement.

For that to happen, however, attitudes among the main actors have to change dramatically. For starters, we need to acknowledge that the Bali-related negotiations — at least so far — are eerily reminiscent of a trench war.

For several years now, the main focus has been on the tensions between the EU and the Bush Administration. However, there is another equally difficult problem to solve — the so far irreconcilable positions of the industrialized countries and the emerging economies.

True, the most important reason, no doubt, for the lack of overall progress in the climate negotiations so far has been the non-cooperative attitude of Mr. Bush.

No plan of action for the long-term can be successful without active U.S. involvement. The U.S. decision to leave Kyoto made negotiations with countries like China and India all the more difficult.

If the world’s self-ascribed richest nation does not assume responsibility for its own emissions, it is easy to understand why nations where poverty is still rampant are reluctant to agree on emission targets.

One of several conditions put forth by President Bush for signing an international agreement has been that China and India must be party to it as well. In response to that, China and India, predictably enough, have referred to the principles of “common and differentiated responsibilities” that underpin the climate convention.

Industrialized countries are the main party responsible for climate change. We created the problem and account for almost 80% of cumulative emissions. While we knew better, we did rely on cheap oil for modernizing our economies — and to help raise living standards in our part of the world.

This is the main reason why demands on emissions reductions in the Kyoto Protocol only target the industrialized world.

The big question now is how to deal with future emissions in a post-2012 framework. Because of the rapidly rising emissions in many emerging economies, no future agreement will be effective unless a mechanism is found to include them in a meaningful way.

Many developing countries perceive an agreement on emission targets on their part as a threat to their economic development. At the same time, most of them realize that it would be in their interest not to first pollute and then clean up.

Their economies are much more sensitive to climate change, and many regions may face negative impacts on food production.

The heath problems from continued high use of fossil fuels, not least coal, is another strong argument for choosing a different course.

Both the Stern and the IPCC reports stress the need for total emissions to start declining within the next decade or so. For that to happen, we need the cooperation of all nations.

China has already committed itself to doing a lot. The country’s plan is to enhance energy efficiency by 4% yearly till 2010, and increase the share of renewables from 5% to 15% in 2020.

However, these ambitious goals will be more than neutralized by a 10% annual economic growth rate. Moreover, the Chinese economy being terribly wasteful with energy, the efficiency improvements required would have to be much bigger. To make a real difference, EU leaders have made a commitment to reduce emissions by 20-30% before 2020. This means that EU emissions would be between 1-1.5 million tons of CO2 lower per year in 2020 as compared with today.

In the meantime — and based on current trends — emissions in China and India would continue to grow, and could be more than six billion tons of CO2 higher per year in 2020, as compared to the level today.

These stark figures demonstrate the urgency to bring about a breakthrough in the climate negotiations and get the world on a sustainable emission path.

The only real solution to our dilemma would be a broad partnership with countries like China and India. A global carbon market is one important element, but it will take time to develop.

The main challenge in the short-term will be to develop low-carbon strategies for emerging economies, without compromising their right to development.

The starting point must be one of equity and the historic responsibility for climate change of the industrialized countries. Emerging economies should be offered a Climate and Energy Partnership to help facilitate the transition to a low-carbon economy — and to help “climate-proof” development. The following elements could form the basis: