10 points on what Germany needs to do to save the Eurozone — and safeguard Germany’s own interests. 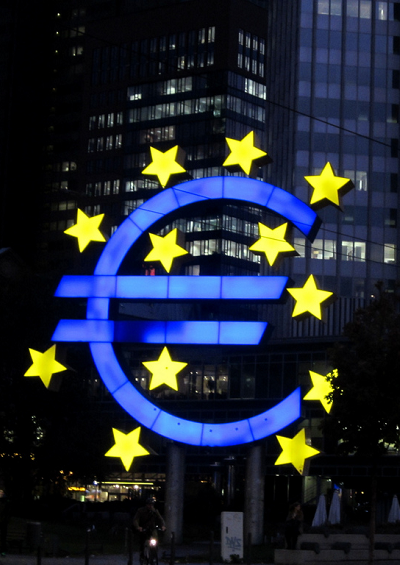 The political pressure on Germany is rising in Europe. The country faces a choice: Continue business as usual or change the strategy?

Only the latter option may give it real influence on shaping the future course of economic and political affairs in Europe. Playing defense is the comfortable choice, but it may be the wrong strategy.

What needs to be done? Below is a proposal for saving the Eurozone in a way that would safeguard Germany’s interests, too:

1. Admit the facts: Policymakers need to communicate the message very clearly that between 3.0 and 5.0 trillion Euros of government and private debt in Europe will not be served in an orderly way. This excess debt needs to be written off.

2. Pool the debt overhang: Excess debt should be pooled into a debt redemption fund, with all the Eurozone countries bearing joint liability for it.

3. Pay off the debt: Start an orderly process for paying off this debt over a period of at least 20 years. Such longer maturity periods will help to reduce the cost saving pressures that many Eurozone countries are facing.

4. Issue Eurobonds: The debt relief fund (see #2 above) will be refinanced by Eurobonds specifically issued for this purpose. These bonds, with joint liability of all Eurozone countries, will have long maturity periods and low coupon rates and should be amortized on an annual basis.

5. ECB intervention: The ECB could purchase some of these bonds, thus ensuring long-term financing for this legacy debt at low interest rates. The risks are properly balanced: The greater the portion of these bonds purchased by the ECB, the smaller will be the burden on the domestic budgets of the member countries.

6. Show solidarity: Countries like Greece, Ireland, Portugal and Spain are unlikely to be in a financial position to be able to deal with their debt overhang by themselves. Better-positioned countries, especially Germany, will need to make generous contributions to counter this.

Economically, this is equivalent to offering debt waivers – though in this case, extended over a longer and hence more manageable – maturity period. Hard though this may be to swallow politically, it is the mature choice to be made. Leadership means to look for what’s right for the continent over the long haul.

7. Cap the liability: A mandatory feature of socializing the unserviceable debt across the Eurozone in this manner is the establishment of a fiscal union, in which individual member states give up their budget sovereignty.

Alternatively, there needs to be a clear understanding that, as in the United States, there will be no joint liability for servicing the debt obligations of individual member states in the future. In the latter case, all member states would start with debt levels of 60% of their GDP.

Capital markets would then be free to determine the interest rates on the outstanding debt – based purely on the creditworthiness characteristics of the respective countries and without interference from the ECB.

8. Implement real reforms: Relieved of the pressure of severe austerity measures, Eurozone countries would find it easier to agree upon a common growth agenda: Free up and mobilize the labor market, adopt targeted immigration policies, make investments in education, innovation and infrastructure.

On the face of it, these points sound pretty similar to the requests by the critics of the current strategy. Both European “rockstar economists,” Varoufakis and Piketty have suggested similar things — but with two important differences:

9. Varoufakis and Piketty want to have mutualization and monetization without any economic reforms and agreements with the creditors. They just want to get the help without offering anything in return.

If Germany takes the lead, it will be in a much better position to ask for something in return. That will also generate political goodwill with the European public.

10. They not only want to clean up the existing mess, but rather want to get a blank check for future spending. If Germany took the lead on debt restructuring, it could insist on either full integration or a return to the no-bail-out principle similar to the United States, where no state has to guarantee the debts of another state.

No doubt, the financial costs of these moves to Germany could turn out to be significant. Depending on the total value of debt that is mutualized and the conditions under which the debt relief fund is refinanced, Germany’s liability could run up to about a trillion Euros.

Large as that sounds, it is almost exactly as much as the estimated adverse impact of the energy transformation (“Energiewende”) that Germany hastily embarked upon.

I can already hear the critics shouting: Isn’t this unfair towards those who took care to keep savings? Why on earth should we be bailing out the creditors? Isn’t the ECB intervention tantamount to direct public sector financing, which in turn would have inflationary repercussions? How can we be sure that we won’t be in this same mess again in a few years? Why should Germany be doing this at all?

The answer to the first of these questions is easy: Yes, in fact it is really unfair! But the damage has already been done and all that we can decide upon now is how we want to bear it out. By unilaterally stopping the debtors from making repayments? By fueling inflation? Or rather by means of an orderly process? Given the potential collateral damage of the first two of these, I strongly favor the adoption of an orderly process.

Likewise, it is true that this would result in bailing out the creditors – in this particular case, banks and insurance companies. But here, too, what would be the alternative?

If we let banks bear the brunt of it, their losses would have to be salvaged by taxpayers’ money. Going for creditor participation – as in the case of Cyprus – would also have a severe adverse impact on the German depositors.

And if it is the insurance companies that lose out, their customers would end up bearing losses either directly, as in case of life insurance, or indirectly through higher premiums, as in the case of property insurance.

In short, there really are no scenarios where Germany exits from the present Eurozone mess in unblemished form. The only relevant question is what’s the least bad alternative?

What about the ECB?

Getting the ECB involved in order to resolve this issue will also be viewed with a lot of skepticism, and quite rightly so. Are we again being confronted with the inevitable prospect of hyperinflation, following direct injection of funds into the public sector, as seen in Weimar before?

Contrary to the ECB’s recent decision, which raises the funding cap for Greek banks by €500 million, the mechanism proposed above would be a one-off action only. Its financial scale will have been defined and well-confined in advance.

Getting rid of the debt overhang problems would boost the European recovery, thus making further intervention by the ECB redundant. Finally, it would be possible to assess the monetary impact of such a proposal with much greater accuracy than is the case in the current scenario, where there seems to be no foreseeable end to the ECB interventions.

Make no mistake about it: Implementing the above measures is still no guarantee that we will not face a financial crisis again.

But that only makes it all the more imperative that, when negotiating the terms of the debt relief fund, binding provisions are incorporated which foster comprehensive European integration and/or enforce a no-bail-out clause.

These terms would then be equally binding upon future governments, too. In the light of recent developments, there might understandably be reservations regarding the feasibility of such a proposal. However, as long as we are committed to the Euro, we have no better alternative.

Germany faces a choice: Continue business as usual or change its Eurozone strategy?

Can Germany save the Eurozone while also safeguarding its own interests?

There really are no scenarios where Germany exits from the present Eurozone mess in unblemished form.

Germany faces a choice: Continue business as usual or change its Eurozone strategy?

Can Germany save the Eurozone while also safeguarding its own interests?

There really are no scenarios where Germany exits from the present Eurozone mess in unblemished form.

Keeping China In or Out? Beijing Vs. Washington on TPP