How Competitive Is the U.S.?

Americans like to think of their country as the top-ranked nation on many accounts. But does the perception match the reality? 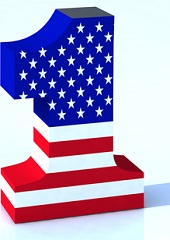 Americans like to think of their country as the top-ranked nation on many accounts. But does the perception match the reality? The World Economic Forum’s annual Global Competitiveness Report ranks the performance of more than 140 countries on a range of 12 key categories.

We wonder: Which of the following categories does the United States rank in first place globally?

The United States currently ranks seventh in overall competitiveness in the World Economics Forum’s Global Competitiveness Index, an annual ranking of the economic potential of the world’s economies. As recently as 2009, the United States ranked first overall, but has fallen steadily since.

Competitiveness measures the set of institutions, policies and factors that determine a country’s level of productivity — and is considered the best all-around way to describe a country’s economic performance.

Among the factors included in the index are health care, education and workforce training, which is why the Scandinavian countries rank so high. Finland, Sweden, Denmark and Norway all rank among the top 15 most competitive economies.[/toggle]

American economists certainly still are the opinion leaders in the global debate. And U.S.-born or U.S.-based economists have won or shared every Nobel Prize that has awarded in the field of economics since 1990.

However, it is one thing to be at the cutting edge of an academic discipline — and quite another to have the political system in place to execute a prudent economic policy.

Given the profound difficulties of solving the U.S.’s longer-term growth and fiscal challenges, the United States is ranked only in 111th place globally with regard to its macroeconomic environment. Of the twelve factors measured by the WEF regarding a nation’s competitiveness, this category is by far the worst U.S. score.

Political divisiveness aside, high budget deficits and high debt limit the government’s ability to make productivity-enhancing investments, a phenomenon that is compounded by the country’s low savings rate. [/toggle]

In the 1950s, the United States was the unquestioned leader of the world when it came to its national infrastructure. For example, a big spending program to establish the national highway system was established under President Dwight D. Eisenhower, a Republican.

The infrastructure he invested in, though, is by now over half a century old. Accordingly, the roads and bridges around the nation are in increasingly bad repair. The same finding applies to many of the nation’s schools, airports and public facilities.

According to a report by the American Society of Civil Engineers, the United States needs to spend $3.6 trillion — more than $11,000 for every American — through 2020 to put its critical national systems in good repair.

The United States will need to make a big effort to move up from its current rank of 14th place globally.[/toggle]

The United States certainly leads the world in terms of the amount it spends on health care — at a staggering 17.9% of GDP in 2011. However, given the United States’ low rank in this category (34th), the amount of money spent does not necessarily correspond with good health. That performance puts the United States one spot behind Malaysia and one spot ahead of China.

Equally worrisome, the World Economic Forum’s ranking in this category also includes the quality and quantity of primary education its citizens receive, which is not a good sign for the nation’s long-term productivity.

But the United States is not expected to hold onto this top position for long. According to the OECD, the size of China’s economy will overtake the U.S. economy as soon as 2016. [/toggle]

This quiz was featured as a segment on the Marketplace Morning Report with David Brancaccio on August 14, 2013. You can stream the audio of the segment here.

On which of these does the U.S. rank 1st: competitiveness, macroeconomics, infrastructure or health/education?

On which of these does the U.S. rank 1st: competitiveness, macroeconomics, infrastructure or health/education?

Passing Up A Golden Opportunity