Will Israel be able to create a better political reality in order to save its very existence? 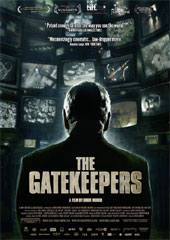 When six former heads of Shin Bet, Israel’s secretive internal security service, make themselves available for extensive on-the-record, on-camera interviews, it is clear that something major is afoot. After all, the individuals interviewed served different political masters, and it is certainly not part of their professional tradition to be talkative.

Director Dror Moreh’s 2012 documentary film, The Gatekeepers, currently being screened in Washington, D.C., has a true Shakespearean quality about it. It is a well-told drama, making the audience appreciate the tragic quality of the unfolding narrative. No wonder it was also nominated for Best Documentary at the 2013 Academy Awards.

Just as one does with Shakespeare himself, one wonders whether all of this could be real, or whether the documentary is merely a fictionalized account of the work of these former intelligence officers. For the message they arrive at, one after the other, is as straightforward as it must be unpleasant for Israeli authorities: Their country is doomed.

In the Shin Bet directors’ telling, after the unexpected triumph of the 1967 war, Israel for a long time did the right thing. While overly arrogant at times, it stayed in close touch with the population of the Occupied Territories.

But when the country’s leadership decided to withdraw from Gaza in 2005, it started to rely on a Zeus-like power of managing relations with Palestinians, quite literally, by remote control and from the sky.

Not so incidentally, the lesson learned by Israel’s internal security service’s leaders also has great relevance for the U.S. war on terror and the reliance on drone warfare: It is sure to backfire and will not serve the nation’s long-term goals well.

All that this “droning” does achieve is to serve narrow-minded bean counters’ sterile desires to “go for the kill,” as if killing the head of an organization would destroy the whole body. Even the most complex of kills — such as the January 1996 assassination of Yahya Ayyash, as related in The Gatekeepers — is but a fleeting and futile moment of “success.”

One man’s destruction ultimately only served to motivate thousands of young men, deeply frustrated about their inability to prevent such killings, to be ever more desperate and ready to kill for their cause.

What prompted the six Shin Bet heads to talk and talk so loudly and clearly about their past activities and the evident lack of a proper strategy on the part of their nation’s politicians?

It stands to reason that it was sheer frustration. If they had not seen Israel as potentially on the road to self-destruction, they would be unlikely to have chosen to speak out at this juncture.

All the kill statistics provide an entirely false sense of security. Reducing the conflict to a mechanical numbers game as well as a cat-and-mouse game may be tempting. It allows the politicians to make their own people forget that the battle is about one of the most ancient and most complex problems on the face of the earth.

The only currency that can really make a difference is the oldest biblical currency — trust. That may be extremely hard to obtain in today’s Middle East, but the less one tries it, the harder it will be to change things.

The current fascination with what at best are tactical successes cannot cover up the fact that the real strategic question is never properly addressed. One of the former Shin Bet heads, Ami Ayalon, tellingly quotes the Prussian military theorist Carl von Clausewitz: “Victory is the creation of a better political reality.”

By that definition, the U.S. excursion into Iraq — just past its 10th anniversary — is a complete failure. And in Afghanistan, measured by that standard, the United States has not even begun to lay the groundwork for victory. To date, with its near-relentless pursuit of military means, it has done just about everything but create a better political reality in that country.

Clausewitz isn’t the only German prominently cited by the Shin Bet heads. Hannah Arendt’s famous words about “the banality of evil” — the subtitle of her essay on the trial of Nazi war criminal Adolf Eichmann in Jerusalem — also plays a prominent role.

The grandfatherly Avraham Shalom, director of the Shin Bet from 1981 to 1986, painfully speaks of how the operations of Israel’s military in the Occupied Territories remind him of the ways in which the German Wehrmacht operated in WWII in Poland, Czechoslovakia and elsewhere. It is hard to imagine a more painful form of self-indictment.

Shin Bet directors are no peaceniks. If anything, they are the opposite — the tip of the spear to keep Israel safe at home. They have a vast arsenal of technological and military assets at their fingertips in order to get the job done.

As is the case with America’s military globally, so it is with Israel’s military regionally: It is second to none. And yet, in the considered judgment of the six former directors, all of this is not a sufficient strategic asset to safeguard Israel’s integrity and security.

If it were, they surely would not have spoken out. Because it isn’t, they felt they had no other choice than coming out in public as a group. Their joint mission is to rain on the parade of those statistics-obsessed technophile destructionists who take false comfort in the “security” of their spreadsheets.

Yaakov Peri, who headed the Shin Bet from 1988 to 1995, delivers a true stunner of a testimonial when he tries to make sense of the arc of his career in the security service: “I think,” he said, “after retiring from this job, you become a bit of a leftist.”

That quote ought to strike home to all Americans. For all the efforts to portray Israel as being totally united, and despite its extreme military and intelligence prowess, tensions within the country — political, economic, strategic and social — threaten to tear Israel apart.

None of that safeguards the country against the two most seditious forces of all. The country no longer has even the figment of a common answer to the two most fundamental questions any society, especially countries overwhelmingly settled by immigrants, must be able to answer confidently and resolutely. They are: “Why did we come here?” and “What do we have in common?”

In light of the great political division and divisiveness in both the United States and Israel today, it is stunning to observe that neither Israelis nor Americans can give a consistent answer to these questions.

In either case, the sentiment of clear animosity that is shown toward the respective other half of society is puzzling, to say the least.

In Israel’s case, one cannot escape noticing that the Palestinians aren’t so much the (common) “enemy” anymore as the principal occasion to hate the other (domestic) camp.

But the biggest message for Americans that emanates from The Gatekeepers is to understand the reason why their attention is so artfully, and so vehemently, focused on Iran and the impending nuclear threat presumably directed at Israel.

Whatever the merits of that particular argument, it surely detracts completely from the biggest — and most self-destructive — menace to Israel’s internal security. And that is the extreme degree of internal dissension that mars the country today.

In fact, it stands to reason that, were it not for the threat of Iran’s missiles, the world’s attention would be focused much more on Israel’s extreme degree of internal divisiveness. But few in the U.S. and Israeli military and political establishments have any inclination to allow the world’s attention to focus on that.

The six former Shin Bet directors beg to differ. With great courage, and in amazing unanimity, they have sounded the alarm. Now, it is for the world to listen.

The message that the former heads of Shin Bet arrive at is straightforward: As things stand, their country is doomed.

The lessons learned by Israel's internal security service have great relevance for the U.S. war on terror and its reliance on drones.

Rather than rely on the trappings of remote-control bombings, the only currency that can really make a difference is the oldest biblical currency — trust.

I think, a former director of Shin Bet opined, "after retiring from this job, you become a bit of a leftist."

Were it not for the threat of Iran's missiles, the world's attention would be much more focused on the internal dissension within Israel.

The message that the former heads of Shin Bet arrive at is straightforward: As things stand, their country is doomed.

The lessons learned by Israel's internal security service have great relevance for the U.S. war on terror and its reliance on drones.

Rather than rely on the trappings of remote-control bombings, the only currency that can really make a difference is the oldest biblical currency — trust.

I think, a former director of Shin Bet opined, "after retiring from this job, you become a bit of a leftist."

Were it not for the threat of Iran's missiles, the world's attention would be much more focused on the internal dissension within Israel.

America’s Turn Away from Oil