Is it a good idea to make a brilliant man the next U.S. Fed Chairman? 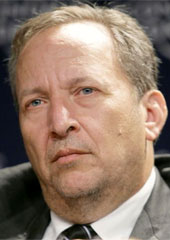 Whatever one wants to say about Larry Summers’ intelligence, it is also true that, despite all his professional success, he remains a highly insecure kind of guy.

He can’t help his arrogance. Most people shouldn’t take it personally. They should just consider it a direct reflection of his insecurity.

But that does not bode well for the job he is now up for — and which represents the likely culmination of his career, ever since he did not get the World Bank presidency.

What Summers brings to mind is an earlier period of the “whiz kid” syndrome, none other than Robert McNamara, John F. Kennedy’s Secretary of Defense.

He was the man whose sheer and unassailable “brilliance” got the United States fully trapped into Vietnam.

When it comes to selecting a U.S. Fed Chairman, three criteria are important: professional competence, open-mindedness and the ability to rest in oneself. Unfortunately, Larry Summers scores only 1.5 out of 3 on those criteria.

Janet Yellen, the current Vice Chair of the Fed, would be close to 3 out of 3 on anybody’s book. She has no temperamental issues.

Of course that does not keep those who implicitly raise the “woman issue” from doing their level best to insert that age-old stereotype across into the equation. And yet, if anybody is given to mood swings, it’s Summers — not Yellen.

That critical scoring may still not be enough for Yellen to get the nod, given the determination of Obama’s team of guys to push him through.

Summers is also said to have the “respect” of the financial markets. More likely, he has their backs — which is not what the American people need.

Alan Greenspan, of course, did not just have the “respect” of the financial markets. They adored him. The disastrous results for the global economy and America’s middle class are now well known.

Ultimately, the trouble with Larry Summers is two-fold: First, no matter what other people want to tell you about his open-mindedness, he ultimately believes that he does have all the answers.

And second: While some of his answers are actually good and on target, he mostly presents those in newspaper comments when he is out of power.

That is not just regrettable, but downright shameful for a man who has twice been at the top level of policymaking influence, first as Treasury Secretary under Clinton and then as White House economic czar under Obama.

He has largely wasted those opportunities. When he had the chance to do good things while in office, mostly he didn’t. At those times, he usually was an ardent defender or stage preparer for the powers that be, mainly Wall Street.

Despite his reputation as a ruthlessly honest intellectual, Mr. Summers is a man dangerously prone to reveling in notions of cultural supremacy.

Consider these words, spoken by him at the World Economic Forum in 1998: “Not in 500 years has a nation been this dominant in business, technology and culture.”

But such cultural arrogance isn’t the only worry about Mr. Summers.

We would all do well to remember that in 2008, the year before he joined the Obama Administration, Mr. Summers made more than $5 million in compensation from the D.E. Shaw hedge fund — for a reported one day a week of actual work.

In addition, he received more than $2.7 million in speaking fees from Wall Street companies that received bailout money.

Now, in a market economy, everybody is free to sell their skills to the highest bidder.

But, at that exalted pay level, there were always legitimate concerns about what Summers received was “pre-pensation” for future actions — rather than compensation for actual services.

It was as if to say with a wad of dollars: “Once you’re at 1600 Penn, we know you’ll keep a watchful eye out for the interests not just of the firm or hedge funds, but the big players in the financial industry more generally.”

And that, in his two-year stint in the White House, he most certainly did.

He had the record to prove he would watch out for their interests. His fingerprints are all over the disastrous undoing of Glass-Steagall during the Clinton Administration.

Along with Bob Rubin and the understudy, Tim Geithner, he was in charge of “making the world safe for A.I.G. and Citibank.”

Need one say more? Their joint effort spelled even more disaster for the American people than Bush Junior’s ill-fated invasions of Iraq and Afghanistan.

With that track record, which is not a matter of conjecture, but history, all the current efforts of his supporters fall flat. Larry Summers — despite his intellect (or because of it?) — has not shown the integrity that he ought to have had.

Instead, he proved the old rule: supporters will always be keen to attest that the person they want “back in” has nothing but the noblest of motives.

And so we hear much these days about Summers being a sure-fire reformer or as having seen enough of the dirt in the past so that he now wants to be Mr. “Squeaky Clean.”

The American people would be well justified in having their doubts.

Summers, despite all his professional success, remains a highly insecure kind of guy.

Summers has twice been at the top level of policymaking influence but largely wasted those opportunities.

Summers is a man dangerously prone to reveling in notions of cultural supremacy.

Summers, despite all his professional success, remains a highly insecure kind of guy.

Summers has twice been at the top level of policymaking influence but largely wasted those opportunities.

Summers is a man dangerously prone to reveling in notions of cultural supremacy.

China and the Catholic Church