The Bolshevik Roots of the U.S. Tea Party 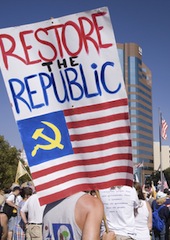 In the United States, Republican Party primaries used to be deadly boring affairs – until quite recently, that is. But since 2009, they have become as passionate and contentious as meetings of some clandestine revolutionary cell. Candidates swear their undying loyalty to the True Faith and ardently accuse their rivals of apostasy.

Indeed, whatever connections historians and political analysts have been drawing between the Tea Party and previous grassroots populist and nativist movements in the United States, they have so far missed out on the most significant parallel.

The U.S. Tea Party movement most closely resembles its total ideological opposite – Russia’s intransigent Bolshevik Party. The Bolsheviks took power in revolutionary Russia in October 1917 and built the Soviet Union.

The Tea Party grew out of the Republican Party. But no sooner did it emerge as a real force did it turn its venom on its political progenitor. Tea Party candidates started accusing mainstream Republicans of betraying the conservative cause and of being inclined to reach compromises with the hated Democrats.

Tea partiers call those Republicans who don’t share their own intransigent views “RINOs” – Republicans in Name Only. In other words, they cast them in Soviet-style as traitors to the cause.

Bolsheviks came into being when Lenin created a radical wing within the mainstream Russian Social Democratic Party. He constantly attacked his opponents in the party as traitors to the Marxist cause, whom he saw as only pretending to be socialists.

Lenin was hell bent on an all-out revolution. He also claimed that any willingness to work through the democratic process and to reach compromise with other reform-minded forces in society made them “revisionists” and “opportunists.”

A century onward and a continent away, the Tea Party has unleashed a civil war within the Republican Party, but hasn’t yet become an independent force. In Russia, the two wings coexisted within the party for nearly a decade. It was only in 1912 that Lenin’s radical wing finally broke away and formed a fringe party of its own.

Thereafter, whenever the Bolsheviks got into government, as true believers they refused to cooperate with anyone. Their unbending stance is just like that of elected politicians from the Tea Party.

Time and again, they have proven their willingness to damage the United States economy and undermine the country’s vital interests, all in order to make Barack Obama a failed president. They could have wholeheartedly subscribed to Lenin’s infamous principle: “The worse, the better.”

ABC: Anything but conservative

This makes a mockery of the Tea Party’s self-identification as a “conservative” force. Traditional conservatives are people who trust the established order and are reluctant to tinker with it. Their core belief is that, for better or worse, the system has been shown to work. In contrast, reforms and innovations, however well-intended they might be, are by definition untested and risky.

By this definition, the Tea Party is anything but a conservative movement. On the contrary, its members clearly hate the established order.

As we know, the Tea Party abhors the federal government. To them, it’s an un-American socialist abomination. In the words of radical anti-tax activist Grover Norquist, it has to be shrunk “to the size where we can drown it in the bathtub.”

If facts mattered, Tea Partiers would have to recognize that Ronald Reagan, whom they ostensibly revere, is the one who started the modern expansion of the Big Government and who is responsible for the massive growth of federal deficits in the United States.

Every Republican president since Reagan similarly left behind a far larger government bureaucracy and a bigger debt than when he came in, both in absolute terms and as a share of GDP.

While they are vehemently anti-government, Tea Party members at the same time want the government to be quite invasive in the private life of individuals.

They support legislation requiring unnecessary procedures for women seeking abortion. They want state-imposed morality, in the form of constitutional amendments defining marriage. And they see the state as a protector of Christian and family values.

It may come as a surprise to Tea Partiers, but communists were similarly anti-state, at least in theory. Marx famously defined the state as an instrument of oppression of one class by the other. He had predicted that, under communism, it would simply wither away – in other words, you wouldn’t even have to drown it in the bathtub.

Yet, the moment the Bolsheviks took power in Russia they spawned a huge bureaucracy. As the Soviets built communism in their country during the 20th century, the bureaucratic behemoth continued to grow.

The U.S. bureaucracy has not shrunk since neo-conservatives and Tea Partiers arrived in government. Examples include expanding the bureaucracy to include Homeland Security as well as the intrusive actions of the NSA.

In other words, both the Tea Party and the communists do exactly the opposite of what they preach the moment they get their hands on the levers of power.

And then, there is the funding. The Tea Party may have started as a spontaneous grassroots response on the part of some portions of U.S. society to the election of the first African-American president.

But it would never have risen to such prominence had it not been for a number of right-wing billionaires, such as the Kochs, bankrolling the movement. Their money fuels the fielding of Tea Party election candidates, a force designed to attack both Democrats and mainstream Republicans.

Those billionaires pursue their own goals — such as lower taxes on their wealth and fewer regulations on their businesses. Tea Partiers are all too eager to do their bidding.

Biting the hand that feeds

Unfortunately, they are part of a long tradition. The Bolsheviks also benefited from the support of deep-pocketed Russian industrialists. Some of the richest men in Russia thought that, by building up a fringe radical group who called themselves the Bolsheviks, headed by lunatic Lenin, they could push the Tsarist government to broaden its economic reforms.

That strategy not only proved too clever by half. It also ultimately cost these “strategists” their collective health, meaning their very lives.

Sadly, U.S. billionaires like the Koch brothers cannot be said to harbor such constructive sentiments. To them, it is all about the money. The Tea Party is just a cute ideological distraction campaign.

The Tea Party is anything but a conservative movement. Its members clearly hate the established order.

The U.S. bureaucracy has not shrunk since neo-conservatives and Tea Partiers arrived in government.

Both the Tea Party and the communists do the opposite of what they preach when they get in power.

The Tea Party is anything but a conservative movement. Its members clearly hate the established order.

The U.S. bureaucracy has not shrunk since neo-conservatives and Tea Partiers arrived in government.

Both the Tea Party and the communists do the opposite of what they preach when they get in power.

TB in China: a New Epidemic of an Old Disease