The Dangers of Economic Isolationism

What does business need to do to win the globalization debate?

What does business need to do to win the globalization debate? 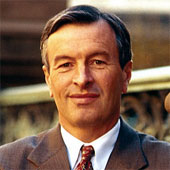 The challenge before all of us today is to expand our horizons, to bring nations and cultures out of isolation — and, each in our own way, to make this world smaller.

One great figure who saw the inevitability of a world coming closer together was Franklin Roosevelt. He became a strong advocate of closer ties between the United States and the world.

Those four freedoms have never been more relevant than today. As Roosevelt prepared his State of the Union remarks, Harry Hopkins — his closest adviser — questioned whether it was wise for the president to include the words “everywhere in the world” in the freedom proclamations.

Hopkins was quoted as saying, “That covers an awful lot of territory, Mr. President. I don’t know how interested Americans are going to be in the people of Java.”

Roosevelt shot back “I’m afraid they’ll have to be, Harry. The world is getting so small that even the people in Java are getting to be our neighbors now.”

Roosevelt, of course, was thinking about globalization back in 1940. He spent much of his remaining presidency fighting a war that had its roots in no small part in isolationism.

There are some striking parallels to the situation we find ourselves in today. Once again, isolationism cannot be an option. The isolationism I would like to address is not political isolationism.

There are others who can address this particular topic with much more competence than I can. What I am concerned about are the implications of economic isolationism. Needless to say that economic and political isolationism go hand in hand.

I work for UPS — a company that is deeply ingrained in the world economy. On any given day, you see those "Brown" package cars rolling down K Street in Washington, the Champs Elysées in Paris, Orchard Road in Singapore — and countless two lane roads around the world. Those package cars are loaded with 2% of the world’s GDP, believe it or not. And UPS also carries 7% of the U.S. GDP.

Given those numbers, we have a unique vantage point on the world. From residential doorsteps to the lobbies of businesses, we see the promise and the peril up close.

We see the challenges — and we see extraordinary triumphs. There is no greater agent working for global peace and stability than the force of increased trade between nations.

Because that bridge links more than commerce. It links cultures and people and lives. No one better expressed this idea than Roosevelt's former Secretary of State, Cordell Hull, who said: "When trade crosses borders, armies don't."

And yet, despite these wise words, U.S. business interests — and the interests of everyone who believes in free and fair trade — are in risk of losing a significant battle.

Worse, we are losing the battle here in the United States and abroad. Part of the reason is the small, but vocal anti-globalization movement, which has pushed its message forward with great force and tenacity in recent years. And to be fair, some of their concerns are valid.

But in my view at least, those concerns pale compared to the benefits of free and fair trade. Regardless of how we think about these activists, we have to acknowledge the fact that we are facing a significant disconnect with the greater public. And remedying that is the real challenge that lies ahead for U.S. businesses.

To be sure, I could not agree more with U.S. Commerce Secretary Evans, Fed Chairman Alan Greenspan, former Treasury Secretary Robert Rubin and other leading economic minds.

They remind us, almost daily, that a retreat toward economic isolationism would be disastrous for American business, for American workers — and for the American economy.

I realize that this is not the most scientific monitor, but go into Google and type in the term "pro-globalization." See what comes up. About 5,500 entries. Then type in "anti-globalization." A much different picture. 112,000 entries.

If you looked just at Google, you’d see that the anti-global advocates have captured about 96% of the thought leadership market on this issue.

Of course, it’s not just on Google. The German Marshall Fund polled Americans this summer and found that only 48% of respondents felt favorably about globalization. Just 29% felt favorably about international competition. The question we have to ask ourselves is "why?" Why would anyone want to retreat into economic isolationism?

Is it outsourcing and job layoffs? Is it the economic conditions of the past few years? The fear of increased terrorism? Or is it the fear of change? Xenophobia?

Whatever the reason, one could argue that we in the business community have not done a very good job framing and promoting the benefits of international trade.

I contend there’s a much, much bigger reason why the free trade message fails to resonate with so many. And that’s because it's not widely understood.

Trade and economic literacy in this country simply has never ranked as a national priority. I would like to suggest five specific areas where we can step up to the challenge of reversing anti-global attitudes.

First, we need to make sure our educational system is aligned with the realities of a global marketplace. In our elementary schools, our high schools, our colleges and universities — we owe it to our children to prepare them for a global future.

Almost 50 years ago, Sputnik launched not only the race for space, but was the catalyst for encouraging tens of thousands of American kids to study science, math and engineering.

We have a similar wake-up call sitting in front of us today with globalization. Second, beyond our schools, we need to make global trade literacy a priority in our nation.

Perhaps the most obvious place to begin promoting trade literacy is within companies. It's imperative that employees understand that we compete in a global economy — and that they are prepared to do so.

Just a few months ago, I tasked our organization to create a company-wide global trade literacy initiative for our employees. We're in the process of building that program with the end goal of strengthening our employees' understanding of global trade, UPS's role — and their specific role.

The third way in which we can step up to the challenges of the anti-global movement is by supporting programs and policies that address training and career development for all of those who have been displaced by international trade.

We can recite trade facts until we are blue in the face. Facts like exponentially more jobs have been lost to productivity and technology than to India and China.

If you have lost a job these facts mean nothing. In fact, we really can't talk about trade liberalization without, in the same breath, talking about programs that help those who have been displaced — or who are threatened to be displaced.

There is a lot we can do. For example, over the last eight years, UPS also has hired more than 60,000 former welfare recipients, retraining them with skills to succeed and giving many their first chance at economic independence.

The fourth way to step up to the challenges of the anti-globalization movement is innovation. Think back 25 years ago. A lot of people were afraid that the United States was going to lose all of its good jobs and economic clout to Japan.

Even greater numbers were worried about having their careers rendered obsolete by the encroachment of technology. That mirrors the fears we see today — only the names have changed.

Instead of technology — it's globalization. Obviously, the challenge of 25 years ago turned into opportunity. And the reason is that American business did what we've historically done best — we innovated.

We have seen the power of innovation first hand at UPS. The infusion of global supply chain practices over the last several years is credited as being one of the growth stars in creating new jobs. We've seen thousands of new jobs within our company alone.

Finally, here is the fifth way in which we can step up to the challenges of the anti-globalization movement: We need to understand that, in foreign affairs, corporate diplomacy is as important as political diplomacy.

The growing wave of anti-Americanism abroad is a significant concern for U.S. businesses. Of course, the roots of this growing anti-Americanism do not rest solely with the military actions taken in Iraq.

Many in the world have been upset for quite some time over what they perceive as an invasion of American culture and values and bad corporate behavior. And the trend is not limited to Western Europe and the Middle East.

We have seen a significant slide in American business's favorability around the world, and in a short time frame. To address these challenges, it is clear that in the 21st century, corporate diplomacy is becoming as important as political diplomacy.

Our actions, our values and our beliefs are not only shaping the perceptions of our companies abroad, but they are forming impressions about our nation and the ideals for which it stands. It's a huge responsibility — one we must manage with care and diligence.

I began my reflections with a quote from FDR on isolationism. It is only fitting to end with another quote from him. During a Fireside Chat in February 1942, the President made this remark:

"The Americans who believed that we could live under the illusion of isolationism wanted the American eagle to imitate the tactics of the ostrich. Now, many of those same people, afraid that we may be sticking our necks out, want our national bird to be turned into a turtle. But we prefer to retain the eagle as it is — flying high."

There you have it. In business as in our society, aiming to be an eagle — not an ostrich — very much is a 21st century value, just as it guided us in the 20th century.