The Democrats’ View on World Trade

Will Democrats lead the return to fiscal responsibility in Washington?

Will Democrats lead the return to fiscal responsibility in Washington? 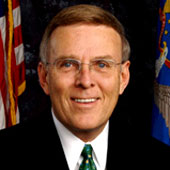 U.S. Senator (D – ND) Senator Byron L. Dorgan has served for 24 years in the U.S. Congress. He spent 12 years in the U.S. House of Representatives, where he served on the Ways and Means Committee. Mr. Dorgan is now serving his third term in the U.S. Senate representing the State of North Dakota. […]

Global trade is going to continue. We couldn't stop it if we wanted to. And I don't want to. What I do want to do is bring an element of reason and compassion to our trade policies. We have to begin managing trade for our benefit.

First, let's start by rejecting the propaganda that our current trade strategy is strengthening our country. It's not true. In fact, it is weakening our nation.

Do you remember the story about Mark Twain traveling from Hannibal, Missouri, to Virginia City, Nevada? It's reported he wrote back to his friends in Missouri and said, "You'll never guess what I've found down here in Nevada. Why there is drinking going on — there are wild women — and there is gambling. This is certainly no place for a Presbyterian — and I did not long remain one!"

I see some of that in the U.S. Congress these days. Oh, it's not women or drinking. It's the gambling — betting on our country's future with this radical, wrongheaded economic strategy.

Republicans used to be recognizable by their flinty serious look — the grey suits and wire-rimmed glasses gave them that conservative appearance as if they had just swallowed a lemon.

And they used to live up to their name. They could always be counted to demand balanced budgets, and they reacted to deficits and debt like a bad rash.

I miss those Republicans. I embrace fiscal responsibility, but I'm feeling as lonely as the Maytag repairman these days. It's a new crowd in Congress, and it's like we've played musical chairs. "Deficits don't matter," Dick Cheney says.

Budget deficits and trade deficits ($1.2 trillion in 2004 and about the same in 2005) don't even make them blink. Oh, how times have changed.

A friend and I were talking about the financial train wreck being engineered by the Republicans one day, and as we were discussing the need for fiscal discipline, he said, "You know, I would join the Republican party — if I could find it." It's clear to me that America is off track. And few in positions to do something about it seem to care.

The theology of so-called free trade, pumped up and supported by the corporate beneficiaries with cheerleading by the major news organizations, has made a thoughtful debate about it almost impossible. The Washington Post and The New York Times relentlessly push the message of free trade on their editorial pages — and seldom allow an alternative voice on their op-ed pages.

Still, even though these papers are full of propaganda by the missionaries for free trade, one would think that as time moves on, all the evidence of the failure of this strategy might produce a change in tone and message.

Any great sales pitch will tell you what's good for you, but the question to ask is what's in it for the seller. Consider the source. From time to time, I've entertained the thought that maybe I'm the one who is wrong about all of this. Maybe this is a road paved with gold. Maybe it will all work out for the better.

But facts keep getting in the way. We are running a trade deficit of over $700 billion a year, the biggest in the history of the world. We've lost over three million jobs that have been moved overseas in just the past five years.

These Asian countries are our largest creditors financing our trade deficit. And I haven't even mentioned the Europeans, Canadians, Mexicans and the growing list of countries with which we have bloated trade deficits.

They, too — along with the Asian banks — own more and more of the United States every day. The world is changing, and we have to change with it, the pundits say.

We shouldn't expect to continue to live forever as an Island of Plenty in a Sea of Poverty. You can't say that and get elected, but that is the premise behind the strategy of this administration and their corporate backers.

It is true things are changing. But there are some things that remain the same. We share this planet with six billion neighbors. And many live in poverty.

One-half of the earth's population has never made a phone call. (Of course, if we give them all phones, the first call they get will be from a telemarketer.) One-half of the world’s people live on less than $2 a day.

And somehow, we ended up living on this unique spot on the planet called the United States of America. And there's only one spot like it. We are living with the greatest opportunities on earth. We shouldn't be ashamed that we've done so well.

We built this place — we built something special here. We accomplished what we have with hard work, by taking risks, and finally, by doing the right thing.

So let's reach out and help pull others up. But it makes little sense to build up our neighbor's house with bricks from ours. Consider — what was it that made our place on this earth so special in the first place? We created an environment where effort, risk, and reward were related.

It was a place where everyone could go to school and be whatever their God-given talents allowed them to be. From this fertile ground, amazing things sprouted.

Our country made breathtaking progress in so many areas. We split the atom, spliced genes, invented the silicon chip, the computer, the telephone, television, cured polio and smallpox, built airplanes and learned to fly them, built rockets and walked on the moon.

But the greatest accomplishment is what we did for humanity. Democracy could never have flourished if Americans had not had the vast opportunities of a thriving, fair marketplace.

But more than that, we also decided that freedom meant people had rights. That applied to all people. Workers had rights — the right to bargain collectively, the right to work in a safe workplace, the right to a fair wage — the right to live and work in dignity. And from those lofty ideals sprang forth the world's strongest economy.

The United States of America is the world's longest and most successful democracy. But, in the history of civilization, we have existed in just a blink of an eye.

In that blink, we built the world's strongest economy and a standard of living envied by much of the rest of the world. And we have been the first to answer the call for help from others around the world. It didn't happen by accident.

It took leadership in both government and business. Leaders with courage and vision, who understand that what has been built in the blink of an eye can disappear as quickly.

The United States cannot survive many more "Me Generations." We can only be great when our inherent sense of right and wrong and of compassion and charity rises above materialism and greed. "Me Generations" crumble like the marble columns of Rome. "We Generations" endure forever.

I believe it is the heart of America from which change will come because it is in the very nature of Americans to face things squarely and set things right. It is the American way to do the right thing. And that gives me hope.

Editor’s note: This essay was adapted from Take This Job and Ship It (Thomas Dunne Books, 2006). Copyright Byron L. Dorgan. Published with the permission of the author.

U.S. Senator (D – ND) Senator Byron L. Dorgan has served for 24 years in the U.S. Congress. He spent 12 years in the U.S. House of Representatives, where he served on the Ways and Means Committee. Mr. Dorgan is now serving his third term in the U.S. Senate representing the State of North Dakota. […]

Will Putin Be Next?