The Obama/Modi Duo: A Summit of Democracies

President Obama’s visit to India has shown the world where his sympathies lie. 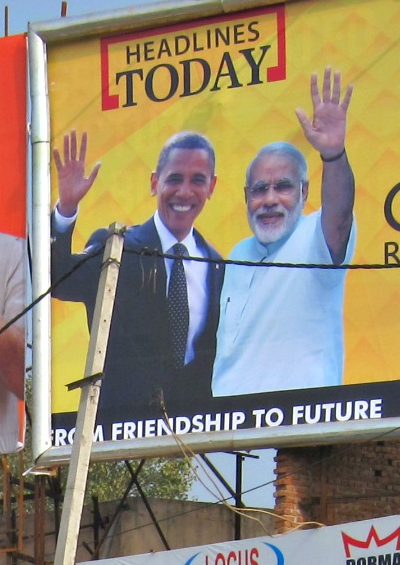 It has not been a visit of the usual kind. Barack Obama’s three-day sojourn in India seals a shift in U.S.-Indian relations with wider regional implications. The new alliance is driven by personal motivation of the elected leaders of the two nations. That is quite extraordinary.

The new dynamism goes beyond the usual diplomatic niceties when, as was the case in New Delhi, the host tells the press, “Barack and I have forged a friendship. There is openness when we talk, and we also crack jokes.” Personal chemistry is an important factor in politics.

Of bigger importance is the understanding communicated by both leaders that it is in the strategic interest of the two biggest democracies of the word to move closer together.

For many Indians, Narenda Modi personifies the hope for a better future. Many associate his leadership with the aspiration that their country may move ahead and overcome mass poverty and underdevelopment.

Modi has a track record of a man who gets things done from his past as a three-term Chief Minister of Gujarat. There, his recipe of deregulation and economic reforms produced visible results.

Recent forecasts of the International Monetary Fund (IMF) and the World Bank have fueled fantasies of economic expansion in Indian minds. According to these reports, India’s economy would grow faster than China’s in 2016, making it the most dynamic of all major economies in the world.

It is crucial to view these numbers in perspective. While China’s share of the global economy is 12%, India accounts for little over 2%. At the same time, the juxtaposition of these figures highlights the enormous potential dozing in India with its 1.25 billion people.

Narendra Modi is determined to unlock this potential. The United States will assist him in this Herculean task. This has been one of the key messages of the summit meeting in New Delhi. U.S. companies have set an eye on India’s gigantic market. Thus far, however, many investors have been held back due to India’s often vexing regulations.

The approximately three million diaspora-Indians in the United States are another driving force behind the Indian-American entente cordiale. Their political impact has grown over the years and has been compared with the influence of the Jewish lobby in Washington.

The Delhi summit of democracies dealt not only with economic issues. The upgrading of bilateral relations is first and foremost political – with wider geostrategic implications.

Clearly, Narendra Modi is the driving force behind the initiative. He wants India to advance from a regional power on the South Asian subcontinent to a respected global actor on the various international stages.

Washington is supportive of the high-flying aspirations of the Indian leader. In New Delhi, President Obama said that he is in favor of reforming the United Nations and that India deserves a permanent seat at the Security Council.

The Indo-American closing of ranks reflects a novel orientation of New Delhi’s foreign policy. Gone are the days of nonalignment and neutrality. With the end of the cold war and the disappearance of military blocks, the old policy of nonalignment has lost its basis.

In this environment, reorienting towards the singular global superpower is a calculated strategic option. In light of perceived hegemonic ambitions of China this strategic choice becomes even more attractive, according to many Indians – and they are joined by Asian neighbors with similar concerns.

Many in the region view expansive, even expansionist tendencies of Chinese policies with growing anxiety. Open border disputes with Beijing stand in the way of harmonious Indo-Chinese relations.

Again and again, these disputes cause serious diplomatic disruptions, as seen during the visit of Chinese President Xi Jinping to India in September of last year.

New Delhi is taking pains not to present the invigorated strategic partnership with the United States as an anti-China-front. At the same time, India does not miss an opportunity to enhance political (and also military) relations with China’s neighbors, be it South Korea, the Philippines, Japan or Vietnam.

Washington is following this outreach with sympathy. A subliminal anti-China message is difficult to overhear as the U.S. and Indian leaders emphasize that the friendship of their two peoples is first and foremost based on a common set of values – the values of freedom and democracy.

There exists an unofficial alliance of Asian democracies, of which countries like India, South Korea, the Philippines and also Japan are regular and permanent members. The People’s Republic of China does not qualify for this group.

With many symbolic gestures of allegiance and friendship in India, President Obama has shown to the world where his sympathies lie.

President Obama is in favor of reforming the UN, with India on a permanent seat at the Security Council.

Gone are the days of nonalignment and neutrality in Indian foreign policy.

For India, reorienting towards the singular global superpower is a calculated strategic option.

With gestures of allegiance and friendship in India, Obama has shown the world where his sympathies lie.

President Obama is in favor of reforming the UN, with India on a permanent seat at the Security Council.

Gone are the days of nonalignment and neutrality in Indian foreign policy.

For India, reorienting towards the singular global superpower is a calculated strategic option.

With gestures of allegiance and friendship in India, Obama has shown the world where his sympathies lie.

India: Getting Back to No. 2