Vietnam: On the Futility of US Invasions

Why on earth did the US invade Vietnam half a century ago? Have the lessons finally been learned? 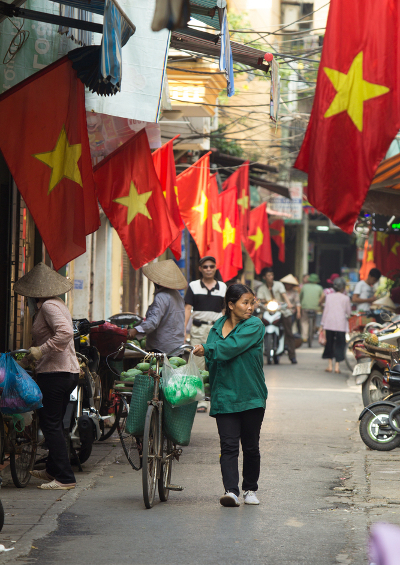 Any Western traveler to Vietnam can only shake his or her head in disbelief at the mere thought that, half a century ago, the Americans stumbled into what is known in Vietnam as the “American War.”

Clearly, American eyes and minds must have been completely shut. If military planners back then had had open eyes, they would have seen the futility of their creeping invasion. Worse, for all its might and resources, Washington never brought the most important of all strategic questions – should we or shouldn’t we? – into play.

Instead, it charged right away into the mere “how to?” – that is, tactics. Almost immediately, U.S. political and military leaders let themselves be drawn in by three self-defeatist forces – pride, vanity and groupthink. Any one of them can quickly turn into a losing proposition. In combination, they are lethal.

Does Washington ever learn?

U.S. leaders at the time were arrogant and power thirsty. Their intention was twofold: First, to assume the imperial mantle of world leadership from the tottering French and the tattered British. And second, to prevent the chimera of Communist world domination.

Communism back then was what the rather unspecific and quite overblown threat of global terrorism is now. Everything was lumped together into one gigantic opponent. Systematic fear mongering at home and abroad tried to justify the existence of the U.S. national security state as a true Leviathan.

Stunningly, the U.S. military-industrial complex and the intelligence-security nexus were then as powerful and strangely domineering in Washington as they still are, even more strangely, today.

A nation, founded in 1776 as a national liberation movement, should have had a better sense of Vietnam’s own legitimate aspirations to shed colonial domination and exploitation.

The four forces that shape Vietnam

To see how futile the whole action was from the beginning can be seen by any visitor to today’s Vietnam. Four core impressions tell it all.

First, the country’s south – the area that the Americans came to defend from the Communist invaders – essentially is one gigantic set of rice fields. In such a terrain, tanks don’t help. Neither do troops, no matter how well equipped. Both simply get stuck in the mud.

Second, the immense energy and industriousness of the Vietnamese: Walk the streets of Hanoi, Saigon, the country’s mid-size towns or villages. The Vietnamese are always on the run, busily, but methodically tending to their rice fields, making a delivery, repairing shoes, sewing clothes.

A nation with such boundless energy is hard to defeat under the best of circumstances, never mind 8,573 miles away from the U.S. mainland.

Third, the beehive nature of Vietnam: To get a full sense of that unceasing force, just position yourself on any downtown street of any major city in Vietnam.

Thankfully, the country has not yet made the full transition to cars. The overwhelming mode of transportation is still mopeds. No matter where you position yourself in downtown Hanoi, for example, just let the camera roll.

Endless waves of mopeds, four or five deep even on relatively narrow streets, and 10-15 deep on larger ones, are heading your way. They file by at considerable speeds. Mopeds loaded with the parents and two children, or with two people, one holding on to a sizable refrigerator.

Or a solemn looking young woman, making the delivery crosstown of a colorful and mountainous looking bouquet of flowers. And none of them, based on what I could observe, crashed.

Obviously, such peaceful energy, speed, elegance of movement and masses of people can – when it comes under existential threat – easily be converted and turned into never-ending waves of stingray-like attacks on the invader.

It is the same force with which the Vietcong defeated the mighty American army. It is the same determination and ingenuity that daringly built the tunnels at Cu Chi, that 200 km long network of tunnels right under the Mekong Delta headquarters of the U.S. Army’s 25th Division.

Fourth and finally, there is the immensely friendliness and openness of so many Vietnamese. Compared to most other Asian nations, the Vietnamese have an innate openness that is disarming, quite literally. They are, in other words, quite globalized in their own way.

Against all that as backdrop, it is especially revealing to visit what is called the War Remnants Museum in Ho Chi Minh City, aka Saigon. The museum, fittingly housed in the former USIA office in Saigon, has an open-air collection of U.S. fighter jets, helicopters and tanks in its front yard.

Inside, there are powerful exhibits. One of them covers the poisonous legacy, which Agent Orange and America’s chemical warfare have on the Vietnamese to this day.

Tellingly, the change occurred when U.S. negotiators sat down with the Vietnamese from 1993 to 1995 to talk about a “normalization” agreement.

That was a brazen act of whitewashing history and U.S. responsibility for war crimes. Instead of accepting the substance and dealing with it for real, the emphasis is on managing perceptions and engaging in PR moves. That is not the kind of acknowledgment of a definite wrong that the Vietnamese still long for when they think of America.

US political and military leaders let themselves be drawn into Vietnam by pride, vanity and groupthink.

What is the lesson from Vietnam? Engage with open eyes, not closed minds

US political and military leaders let themselves be drawn into Vietnam by pride, vanity and groupthink.

What is the lesson from Vietnam? Engage with open eyes, not closed minds

TPP: Beware of the Japan Hype