The G7 summit communiqué surprisingly contains a direct and troublesome admonition for US President Donald Trump. 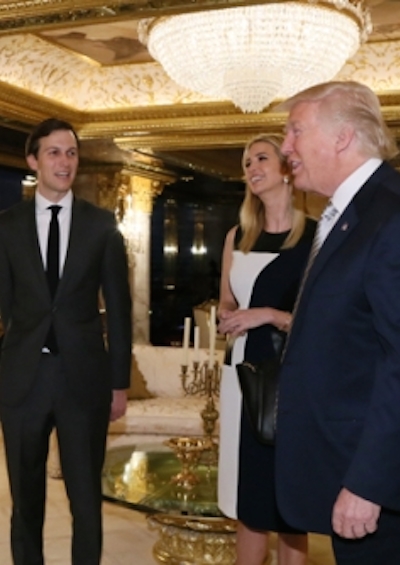 Public prosecutors, FBI agents and investigative journalists know that crucial to their work is the dictum: “follow the money.”

A big oversight by the Trump team

President Trump and the other six Western leaders agreed in Sicily at their G7 Summit that: “We commit to tackling all forms of corruption and tax evasion.”

It is odd indeed that Donald Trump, who is the first U.S. president in decades to refuse to release his tax returns, agreed to that commitment.

It seems that he and his team were too focused on killing consensus among the G7 on global trade and the environment to prevent this hypocritical statement from slipping through.

Moreover, Trump’s chief adviser and the prime architect of most of Trump’s recent Middle East-European tour, is his son-in-law Jared Kushner.

Like Trump himself, Kushner has failed to adhere to all traditional and standard safeguards against financial conflicts of interest while holding public office.

Russia in their veins

G7 Summit statements notwithstanding, many of the people that Trump and Kushner have been doing business with for years go to great lengths to hide their dealings.

Russians have probably bought apartments in Trump and Kushner ritzy buildings in Manhattan. They may also – although we have no facts because of Trump’s determination to be secretive about his finances – have been significant lenders to Trump and Kushner properties.

Last December, Kushner, as a leading representative of Trump’s team planning the transition to the White House, had meetings with two powerful Sergeys: Russian Ambassador to the United States, Sergey Kislak, as well as the head of Russia’s state-controlled Vnesheconombank, Sergey Gorkov.

The ambassador introduced Kushner to the banker. The big question is this: What possible official White House transition team business could Kushner have been considering when meeting with Gorkov?

This man, after all, is no ordinary bank – or even a banker. First, the bank was on the U.S. sanctions list following Russia’s occupation of Crimea. The bank is directly managed by the Kremlin with a number of top government officials on its board of directors, including Prime Minister Dimitri Medvedev.

Second, Gorkov didn’t get his banking education at a business school. Rather, he graduated from the Russian Academy of Federal Security Service, according to The New York Times.

Gorkov, who formerly was a top executive of another bank close to the Kremlin, Sperbank, was appointed chairman of Vnesheconombank by President Vladimir Putin in February 2016.

Anders Asland, a scholar at the Atlantic Council, noted some time ago that Russians hold assets of over $700 billion outside of Russia. The figure could well be significantly greater.

A considerable portion of the funds have moved from Russia to Cyprus and then on to many other financial centers, often via holding companies registered in the British Virgin Islands, Luxembourg, Liechtenstein, Austria, Switzerland and the United States.

They only pretend to hate the West

Russian public officials, their cronies and wealthy Russian businessmen, have long taken actions to see that their vast fortunes are safely invested in the West.

Unlike in Russia itself, these funds are well protected by laws in Western countries. Moreover, these laws — as explicitly as shamefully — ensure that the true ownership of the assets is never publicly disclosed.

Propping up London and Manhattan

The top end of the London and Manhattan real estate markets have benefitted enormously from Russian investments made through offshore holding companies.

This entire shady network of assets was so dubious that former UK Prime Minister David Cameron, while in office, called on the other world leaders for the secrecy surrounding such assets to end.

The combination of tax evasion and money laundering

Cameron was right. The combination of tax evasion and money laundering was increasingly threatening the world’s financial system.

His efforts were boosted by the publication in April 2016 of the “Panama Papers.” A considerable number of legislative proposals have been made in Europe and in the United States to follow up.

After the headlines: Nothing happened

More than a year has passed. What happened? Well, new legislative and regulatory actions have been slowly taking shape in a number of countries – too slowly. Major enforcement of anti-money laundering laws that already exist has also been lacking.

Instead, the highly paid lawyers, bankers, real estate brokers, accountants and consultants in the world’s financial centers — who all profit handsomely from managing the assets of these secret holding companies — have pushed back. They have substantial political clout.

In the U.K., one of their arguments is that in a Brexit era any new anti-money laundering laws might serve to further encourage U.K. based banks to leave the City of London. In the U.S., major financial institutions have been in the vanguard in successfully promoting bank deregulation.

The result is that the G7 Summit only had a single line about the problem. If Trump and Kushner are still in office a year from now, then perhaps the next G7 communiqué will be silent on tax evasion and money laundering altogether.

Hung by their own petard?

But the question is whether Trump and Kushner will still be running the White House a year from now.

The answer may come from what the rising number of investigators find as they follow the money. As it stands, his Russia connection – rather than being a “strategic” asset to the new U.S. President – is turning into critical political and legal liabilities for him.

The “love” he felt from Russia is the most important and, perhaps, the most threatening element to Trump’s continued rule.

The top end of the London and Manhattan real estate markets have benefitted enormously from Russian investments.

Russians have probably bought apartments in Trump and Kushner ritzy buildings in Manhattan.

The top end of the London and Manhattan real estate markets have benefitted enormously from Russian investments.

Russians have probably bought apartments in Trump and Kushner ritzy buildings in Manhattan.

Trump and the Neocons: Doing the Unilateralist Waltz