The U.S.-Russian Tug of War 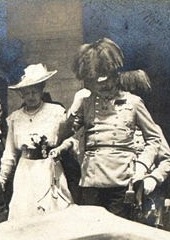 Yet again the same hellish little region of the world has erupted into endless revolutions, wars and civil wars. The superpowers are dangerously aligned on the different sides of the bitterly opposed groups.

Corrupt old regimes have recently been toppled all around the region. Terrorism is rampant and the bright promise of a democratic spring has unearthed fearful nationalist and religious hatreds.

The Middle East — especially Syria and Egypt — today? Of course. But it was also the Balkan Peninsula 100 years ago.

In 1913, a two-year cycle of fierce, vicious little Balkan wars ended — or, rather, seemed to end. The superpowers of the day agreed that an international conference was the best way to try bring a breathing space to the apparently endless cycles of conflict. Every little war had only created new grudges as well as the causes of future bloodbaths. No war ever seemed to settle anything.

Worst of all, the superpowers of the day could not resist investing their prestige and interest in the local rows, murders, assassinations and atrocities.

Otto von Bismarck, the founder of the modern, united Germany and also the pioneering architect of the country’s modern social security systems, showed equal prescience and wisdom when he looked at the Balkans. He quite literally proclaimed it not worth the bones of a single Pomeranian Grenadier. (The Pomeranian Grenadiers were a good-natured joke in 19th century Germany as the most useless soldiers in the nation.)

Getting tripped up over nothing

But in August 1914, every great nation and empire in Europe forgot the wise warning of Bismarck, who had been sent into retirement by his emperor in 1890. As a result, all those pesky little wars changed into a general European and then world war.

All of that happened because a young Bosnian Serb fanatic named Gavrilo Princip, whose terrorist group The Black Hand was secretly backed by the Serbian government, assassinated the Archduke Franz Ferdinand. Ferdinand was heir to the ancient Hapsburg Austro-Hungarian Empire.

The Hapsburg Empire really didn’t need the disputed Balkan provinces of Bosnia and Herzegovina. They were far more trouble than they were worth. They were not exporters of wealth or security. They cost a fortune to maintain and were a security nightmare.

Similarly, Imperial Czarist Russia of the day was experiencing rapid economic growth. The agricultural reforms of assassinated Prime Minister Pyotr Stolypin had laid the foundation of a new era of unprecedented prosperity. Above all, Russia needed international security and peace.

However, its leading generals did not see it that way. They craved general war and worked hard to sabotage Czar Nicholas II’s inept, but well-meaning efforts to mediate peace with his cousin Kaiser Wilhelm II of Germany.

Russia had no real security interest in protecting the guilty government of Serbia from the anger of Austria-Hungary. But it was determined nevertheless not to lose face in the Balkans yet again after allowing Austria-Hungary to annex Bosnia and Herzegovina only six years before.

And so the three great empires stumbled into a catastrophic war that destroyed them all. For causes that should not have mattered at all to any of them.

Fast-forward an entire century and it is clear nothing has been learned.

Today, the United States and Russia warily watch each other and assemble their naval forces off the coast of Syria, where a ferocious civil war has killed more than 100,000 people over the past two years.

Neither nation has the slightest direct interest in Syria. In real terms, it is worth nothing to either of them. But both governments face remarkable pressures to intervene on opposing sides.

In the United States, the reckless obsession with unilateral interventions to promote instant democracy around the world started with George W, Bush and his neoconservatives.

Today, it has spread to the liberal wing of the Democratic Party and the Obama Administration, where it is championed by National Security Advisor Susan Rice and Samantha Power, Rice’s successor as Ambassador to the United Nations.

When Russia feels down

The Russian government of President Vladimir Putin today looks at Syria the way the government of Czar Nicholas II looked at Serbia 100 years ago.

In both cases, they supported a small country of no strategic significance on its own that had no significant sources of oil, coal, uranium, gold or other natural wealth.

Both Serbia and Syria were justly and understandably distrusted by their more advanced and wealthier neighboring states on every side. Both governments had long secretly supported some of the most notorious terrorist organizations on the planet.

However, Russia in 1914 had been forced to stand by, while its rivals made one gain after another in the Balkans, apparently at its expense. The Russians decided they had retreated long enough and hunkered down. They drew a red line in the sand in support of Serbia. And they stuck to it.

Russia’s leaders today feel the same way about Syria. They have seen their traditional allies toppled in one Middle East country after another. They also see U.S. and Western European influence growing in Eastern Europe and even into the Caucasus and Central Asia.

These advances would have appeared inconceivable to Russian and Soviet leaders over the previous 250 years. And they are now determined to stand their ground and draw the line with Syria.

In fact, the real interest of both the United States and Russia should lie in avoiding getting sucked into the imbroglio in Syria. This is especially ironic for the United States, which has already wasted $2 trillion in straight military costs on useless, futile, endless and unsuccessful wars in Iraq and Afghanistan over the past decade.

Will sanity triumph in both Washington and Moscow in the end? The record of both nations’ leaderships over the past half-century offers solid grounds to hope so. But as the fearful precedent of 1913-14 in the Balkans shows, it would be unwise to take too much for granted.

Three empires stumbled into a catastrophic war. Fast-forward a century and nothing has been learned.

The US and Russia assemble forces off of Syria, where neither has the slightest direct interest.

The Russians decided they had retreated long enough and drew a red line in the sand.

Western advances into Eastern Europe, the Caucasus and Central Asia are hard to swallow for Russia.

Three empires stumbled into a catastrophic war. Fast-forward a century and nothing has been learned.

The US and Russia assemble forces off of Syria, where neither has the slightest direct interest.

The Russians decided they had retreated long enough and drew a red line in the sand.

Western advances into Eastern Europe, the Caucasus and Central Asia are hard to swallow for Russia.

Was America Ever Exceptional?