What happens when a bunch of former senators run U.S. foreign policy? 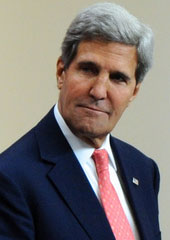 Question 1: How did Kerry get so carried away?

Prior to his becoming Secretary of State, the defining moment of John Kerry’s life seemed to be his appearance before the Senate Foreign Relations Committee in April 1971 as an anti-Vietnam war protester. Back then, he warned wisely and courageously against the involvement of the United States.

Given that prudence and farsightedness at such an early age, why is he now beating the drum of military strikes against Syria — a country that is easily as slippery a slope as Vietnam was for the United States back in the 1960s?

One explanation is that he is a good soldier — and simply did what his boss, the President of the United States, asked him to do.

Perhaps so, except that Obama is actually quite hesitant, while Kerry has gotten carried away with making bold-faced assertions before Congress that likely will not stand the truth test of history.

But for a man with a wooden and highly patrician bearing (he usually speaks of “summering” somewhere when he describes where he spent his summer vacation), such assertiveness and boldness is strange. In the U.S. Senate, he was mostly known as a waffler on issues.

The best explanation, though, as regards his completely opposite positions on Vietnam then and on Syria now, is that Mr. Kerry is mostly a medium. He channels whatever the troops he seeks to lead want him to say.

In the 1970s, his “in group” were the war protesters. And so he marched to the top of their campaign, as students educated at Harvard are told (if not bred) to do. Whatever you do in life, be a leader.

Now, in the Obama Administration, the “in group” is reflexive human rights advocates such as Samantha Powers. And once again, completely consistently with his persona, Mr. Kerry marched to the front of that campaign, anxious above all else to prove his commitment and his value to his cadre.

That, after all, is what he has been conditioned to believe is his role in life, marching at the front of (whatever) parade he can get ahead of.

Nobody questions that something needs to be done on Syria. The question is what that “something” is going to be. The benefits of a military strike, in actuality, are remarkably low, given all the collateral damage that is bound to go along with it.

Does anybody in Washington doubt that a man with the ruthlessness and cynicism of Bashar al-Assad won’t have nasty surprises up his sleeve — for example, hiding his military assets among the civilian population? Muammar al-Gaddafi was a schoolboy compared to Assad.

The feedback cycle in which the United States exists — “we’re the world’s largest military power/if not us, who will take action?” — is dangerously mono-dimensional and predictable, if not potentially self-defeating.

Most military interventions to which the United States has resorted in recent decades have backfired. Certainly, almost all of those that were in similarly murky situations as Syria is now.

With the Russian initiative for safeguarding Syria’s chemical weapons stockpile and putting it under international control, the administration has been thrown an unexpected opportunity to get back on the bandwagon of diplomacy.  One must hope that it will seize it.

Question 3: Getting “Senatored:” Are there any adults in the Obama cabinet?

There is one unfair challenge raised against Barack Obama — that he goes about his job with the demeanor of a college professor (which he never was in the full sense of that term).

Actually, the charge that should be raised against him and his entire top team is far worse. What is it that Messrs. Obama, Biden, Kerry and Hagel have in common? They were all United States Senators.

While that sounds pretty impressive, it is of no relevance when it comes to having executive experience worth speaking of. A U.S. Senator in the majority party from a large state typically controls a staff (including both personal staff and committee staff) of no more than 50 people in Washington.

And beyond numbers, the fundamental role of rank-and-file Senators is to advocate and represent. Except in the rarest cases, they do not formulate overarching strategy or coordinate vast, varied and far-flung resources.

In other words, they have never really run anything. And executive weakness isn’t just a matter afflicting the war cabinet. It pretty much characterizes the entire Obama cabinet. It consists of a bunch of perhaps well-intentioned, but often very undistinguished people, even according to Democrats in Washington.

Question 4: Why does Obama risk a party split?

The hold of the President of the United States over his Democratic Party troops had been tenuous enough before his decision to go after Syria. Now, it is taking on elements of a major realignment in the U.S. political firmament.

Most Democratic members of Congress, at least all that are not from districts with a strong connection to Israel, must be aghast at the President’s shortsightedness in calling for a vote.

Even those that will hold their noses and vote with the President in order not to weaken him for the rest of his second term cannot believe the price their Party is going to pay. Like their constituents, their focus is on domestic issues and on the struggling economy in particular. Foreign policy is at best a distraction for almost all of them.

Just at a time when the Republicans were eating themselves alive, President Obama managed the inconceivable. He is giving Republicans nationwide a great boost — by letting them rediscover what it means to listen to their grass roots (and keeping their grandiose empire impulse under control).

Meanwhile, Democrats are split down the middle, which is decidedly not what the party needed in the run-up to the 2014 elections, when their continued Senate majority is in question.

President Obama has proved once again that he is a terrible poker player. In fact, the only form of poker he seems to know is strip poker. The particular trouble with his understanding of the rules of that game is that he has misapprehended it so fundamentally.

Mr. Obama has made a habit of showing up in a Speedo swimsuit only. In other words, he makes one wrong moved and he’s finished.

Question 5: Why does the Obama Administration suffer from collective memory loss?

Woe be to the foreign soothsayers who proudly proclaim that they have got a fix on the political transformation of their country — if only the United States gives their side a little “nudge.”

Remember Ahmed Chalabi? I do. I sat in television studio green rooms with him in the run-up to the Iraq war. As the U.S.-based front man of the Iraqi National Congress, he was ready to preach heaven on earth — if only the United States toppled Saddam. I, for my part, was one of those who advocated strongly against such simplistic daydreaming.

The results are known. What is inconceivable is how the Obama team has forgotten all about this. Most likely, its collective memory loss is a function of its elitist nature. Young people graduating from Ivy League institutions are told they are supposed to lead (see Question 1 above regarding Secretary Kerry).

They are very adept at changing their tune when they need to in order to make the circumstances fit their positional desires and interests.

Apropos “nudging:” Samantha Powers, likely the woman who got Barack Obama trapped in his “red line” cage, should know all about the potential downsides of relying on nudging foreign fighters. Her husband is Cass Sunstein, who will say he practically invented the field of behavioral economics.

Question 6: Why did the Obama team end up getting captured so completely by the U.S. national security apparatus?

For the answer to that sad question, see points 1-5 above. To be sure, privacy advocates as well as foreign policy strategists who have their home in the Democratic Party would have never dreamt of a world where one can seriously argue that the unspeakable George W. Bush, on occasion, showed more restraint and self-control than the Obama team.

Or think of Mitt Romney, for that matter. It is highly unlikely that he would have gotten his team trapped in the Syria morass, as Mr. Obama has been so eager to do.

John Kerry is a soldier — and simply did what his boss, the President of the United States, asked him to do.

Mr. Kerry is mostly a medium. He channels whatever the troops he seeks to lead want him to say.

Nobody questions that something needs to be done on Syria. What is that "something" going to be?

What is it that Messrs. Obama, Biden, Kerry and Hagel have in common? They were all United States Senators.

Just as the Republicans were eating themselves alive, Barack Obama managed to give them a great boost.

The Obama team's collective memory loss is a function of its elitist nature.

It is highly unlikely that Mitt Romney would have gotten his team trapped in the Syria morass.

John Kerry is a soldier — and simply did what his boss, the President of the United States, asked him to do.

Mr. Kerry is mostly a medium. He channels whatever the troops he seeks to lead want him to say.

Nobody questions that something needs to be done on Syria. What is that "something" going to be?

What is it that Messrs. Obama, Biden, Kerry and Hagel have in common? They were all United States Senators.

Just as the Republicans were eating themselves alive, Barack Obama managed to give them a great boost.

The Obama team's collective memory loss is a function of its elitist nature.

It is highly unlikely that Mitt Romney would have gotten his team trapped in the Syria morass.