Ukraine: Making up for Past Leadership Failures

With May 25 elections looming, Ukraine has a historic opportunity to avoid history repeating itself. 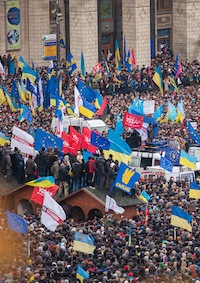 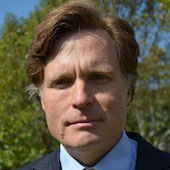 Colin Cleary is a retired Foreign Service officer with the U.S. Department of State.

As the May 25 presidential election approaches, the failure of governance following the Orange Revolution of 2004 serves as a cautionary tale for the current Ukrainian leadership.

There is a reason why the orange color was nowhere to be seen during the EuroMaidan protests. Had the country’s leadership back then governed effectively, there would have been no opening for Viktor Yanukovych to make his comeback in 2010.

There would have also been no opportunity for Yanukovych to fail so spectacularly. That, in turn, is what provided Russia with the chance to pounce on a weakened Ukraine.

It has been said of past Ukrainian leaders that they never missed an opportunity to miss an opportunity. Today the stakes could not be higher. A quick recap of the recent past helps to remind how Ukraine got to this point and why this time delivering on governance is nothing less than an existential issue.

Timing is critical in politics. In early 2005, Viktor Yushchenko had his moment when he personified the hopes of the Ukrainian people. His task was to drive a reformist agenda and make real change.

The majority of the Ukrainian public was behind him — and plenty of international honors and encouragements, from addressing a joint session of the U.S. Congress to being enthusiastically received at the highest levels in Europe, flowed his way.

And yet, Yushchenko squandered his chance with stunning rapidity. Rather than address popular hopes for reining in the crony capitalist system of the Kuchma period, he instead focused his energies on fighting with his erstwhile ally Yuliya Tymoshenko.

Mutual allegations of corruption between Tymoshenko, then Prime Minister, and Petro Poroshenko, then the head of Yushchenko’s National Security Council – and now both leading candidates for May 25 — precipitated the fall of the first Orange government in 2005.

As the Orange Revolution’s glow faded, parliamentary elections in 2006 brought none other than Yanukovych back as Prime Minister. When that proved unworkable, Yushchenko called early parliamentary elections in 2007 – with his Our Ukraine party loosing ground once more. After months of painful deadlock, Yuliya Tymoshenko came back as Prime Minister.

Leadership also means inspiring followers. As President, Yushchenko instead alienated many followers while doing little to bridge Ukraine’s East-West differences. Some former allies were mystified and wondered whether the dioxin poisoning he had suffered in 2004 had impaired his mental faculties.

Yushchenko made securing an invitation to join NATO his top foreign policy priority. But he failed as a leader to increase the tepid support for NATO membership in Ukraine.

Yushchenko’s Foreign Minister, Volodymyr Ohryzko — later dismissed by the parliament because of conflicts with Tymoshenko — conceded in 2008 that only 30% of Ukrainians were in favor of NATO membership.

At the April 2008 NATO summit in Bucharest, European allies proved wary of antagonizing Russia in light of minority support in Ukraine for NATO membership. They blocked an invitation for Ukraine, despite an intense push by President Bush. The result was perhaps the worst of both worlds: no NATO invitation and antagonized relations with Russia.

By summer 2008, there was a near-complete breakdown between Yushchenko and Tymoshenko. Confusion reigned on where executive authority lay on a range of issues. Yushchenko’s chief of Staff, Viktor Baloha, went so far as to denounce Tymoshenko as a traitor, accusing her of illicit contacts with the Kremlin.

As a result, ostensible coalition partner Tymoshenko was subjected to repeated interrogations by the Security Service that was under Yushchenko’s control. Yushchenko tried to call early elections yet again in late 2008, but was repulsed by Tymoshenko.

This conflict also manifested itself in the Russian gas cut-off crisis in January 2009. Under pressure from the EU, at odds with Yushchenko, and face-to-face with Putin, Tymoshenko made her fateful move. She completed what most concede was a disadvantageous ten-year gas deal for Ukraine, committing her country to mandated high volumes of Russian gas at an overpriced formula.

One thing that Tymoshenko did achieve as part of that deal was removing oligarch Dmytro Firtash. He not only claimed close ties with Yushchenko and Yanukovych, but had also been the middleman in the Russia-Ukraine gas trade.

An opening for Yanukovych

The infighting among the Orange Revolution’s principals and the resulting ineffective governance gave Viktor Yanukovych an opening for a comeback from the ignominy he suffered in 2004.

With the help of American political consultants, Yanukovych sought to improve his public image. He made a point of speaking more often in Ukrainian and got a new haircut. He also conveyed the message that, in place of the squabbling Orange leadership, he offered a leadership that would at least get things done.

With Ukraine hit hard by the global economic crisis – its GDP dropped by a staggering 15% in 2009 – Yanukovych’s line had greater appeal. He won a narrow 3.5% victory over Tymoshenko in an election that was, following the Orange norm, essentially free and fair.

Yushchenko, the erstwhile hero of the Orange Revolution, received only 5% of the vote in round one – a shocking repudiation of a sitting president. As a last blow to Tymoshenko, Yushchenko urged his remaining followers — who would have been likely to vote for Tymoshenko – to sit out round two.

And now it was Yanukovych’s turn

On inauguration day in February 2010, Yanukovych had reason to feel vindicated: Few politicians anywhere had come back as far (or as fast) as he had. The United States, for its part, signaled interest in forging constructive ties with Ukraine’s new leader, sending National Security Advisor Gen. James Jones to the event.

Yanukovych made his first trip as President a week later not to Moscow, but to Brussels where he was well received by the EU. His message was clear: While improving relations with Russia, he would continue on a path toward association with the EU.

It appeared a workable start. Yanukovych pledged to foster a pro-business climate. He agreed to an important U.S. request – one that had been stalled under Yushchenko — to eliminate stocks of dangerously stored Highly Enriched Uranium, thus contributing to President Obama’s nuclear security initiative.

Despite ending Ukraine’s bid for NATO membership, Yanukovych pledged that Ukraine would continue with its program of exercises with NATO – and the exercises did in fact take place without incident.

Same as it ever was

But the auspicious moment was soon over. While Yanukovych’s spin-doctors claimed that he was now a successful democrat, in fact he moved quickly to undermine checks and balances and monopolize power.

He pressured Ukraine’s Constitutional Court to change its previous ruling on coalition formation, ousted Tymoshenko as prime minister and secured a compliant parliament.

Yanukovych then met with Vladimir Putin — and gave away the biggest card he had. He granted his Russian counterpart a 25-year lease extension on the Black Sea Fleet in Sevastopol — in exchange for supposed discounts on gas.

In doing so, Yanukovych in effect reaffirmed the disadvantageous gas contract Tymoshenko had signed. Whatever the supposed discounts, Ukraine, as before, wound up consistently paying more for Russian natural gas than did Italy and Germany.

While the opposition in parliament responded to Yanukovych’s concessions to Putin with eggs and smoke bombs in the chamber, the public, still fed up by the the failure of the Orange protests to deliver, this time did not take to the streets in massive numbers. As a result, Yanukovych was able to ride out the storm in the halls of parliament.

Yanukovych then moved to use the Prosecutor General’s office to bring cases against opponents, most notably Tymoshenko. Self-censorship returned to newspapers’ editorial offices and to some TV outlets.

Local elections were delayed and, when held, flawed. Oligarchs grabbed media and other resources. Yanukovych’s family and their associates moved to blatantly enrich themselves. And Yanukovych arranged for Ukraine’s constitution to revert back to that used under Kuchma, with broad Presidential powers.

The mentality Yanukovych and his associates derived from their native “Wild East” region of Donetsk had not changed. They had three simple operating principles: First, power is there to be grabbed without limit. Second, public office remained something to be milked shamelessly for personal gain. And third, political opponents were enemies to be co-opted or destroyed.

Once Yanukovych had his “system” in place, the Ukrainian public was in fact slow to rise. It was only after a long string of abuses that the shock of Yanukovych’s abrupt about-face on the EU Association Agreement roused them. And then it took the violent suppression of that protest to turn it into Ukraine’s next revolution.

In remarks at Maidan on the night of her release from prison in February, Tymoshenko apologized for the shortcomings of Ukrainian politicians of all stripes and admitted they had been unworthy of the people.

As the new Ukrainian leaders face momentous challenges, they would do well to reflect on lessons drawn from the failures of the past to guide them in forging the honest and effective administration Ukraine needs – and that the Ukrainian people deserve.

Editor’s note: The views expressed in this article are those of the author and do not necessarily reflect the views of the U.S. Department of State or the U.S. Government.

The new Ukrainian leadership must avoid the self-destructive infighting and corruption of the past.

Hapless governance by Orange Revolution leaders gave Yanukovych the opening for a return to power in 2010.

The West was open to working with Yanukovych, but kleptocracy & authoritarianism proved too enticing for him.

Colin Cleary is a retired Foreign Service officer with the U.S. Department of State.

The new Ukrainian leadership must avoid the self-destructive infighting and corruption of the past.

Hapless governance by Orange Revolution leaders gave Yanukovych the opening for a return to power in 2010.

The West was open to working with Yanukovych, but kleptocracy & authoritarianism proved too enticing for him.