Should Poroshenko visit Beijing, as Richard Nixon once did? 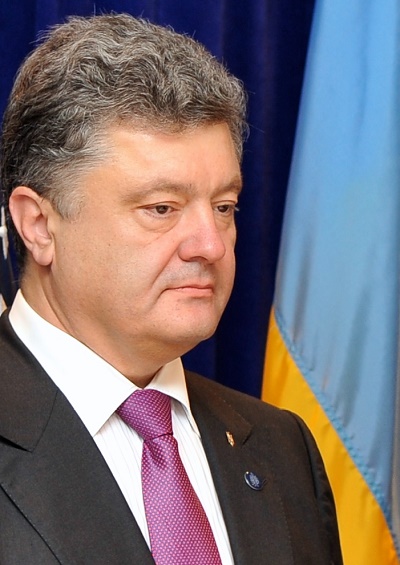 Ukraine’s President Petro Poroshenko recently went to Minsk to negotiate with Russia’s Vladimir Putin.  Afterwards, Russia began a surreptitious, full-scale invasion of Ukraine. Poroshenko now continues to talk to the EU and the United States in hopes of getting some assistance from them, military or economic. So far all he got are expressions of concern about Russia’s actions.

To start solving his country’s problems, the Ukrainian President should take a page from the book by that great Machiavellian, Richard Nixon, and travel to Beijing soon.

So far, neither the United States nor Europe has done much to support Ukraine in its unequal struggle to repel Russian aggression.

True, there have been economic sanctions, but they were mostly imposed after Russia-supported terrorists in Eastern Ukraine shot down a passenger airliner, killing citizens of Western countries. These sanctions are not going to stop Putin’s determination to crush Ukraine.

Americans love to talk about being the last, best hope of mankind and about supporting democracy around the world. However, in the case of Ukraine, Washington has become quite shy about putting its money where its mouth has been for so many decades.

Ukraine’s case for assistance from Western Europe is even stronger. The entire idea of Europe today is based on an ideal — that the European continent could be peaceful, democratic and have open societies and open borders.

Any European nation can join the process of integration — as long as it subscribes to the ideal. Few nations have underscored their determination to be part of Europe more convincingly in decades than the Ukrainians.  They have shed blood for their right to belong to Europe.  The least Brussels can do is welcome them with open arms.

But because Europe has no stomach for a confrontation with Putin, Ukraine has been left to fight Russian aggression on its own.

Thank God, it is not a bipolar world any longer.  For Ukraine, there are alternatives to either begging the West for help or being strangled by the Kremlin’s deadening embrace. This is why Poroshenko should take a trip to China — just as Nixon did in 1972.

Nixon’s visit back then put the fear of God into the aging Russian leadership.  It suddenly envisioned a nightmare scenario of being surrounded by a billion Chinese on one side and NATO forces on the other.

As soon as they realized that, the Russians were ready to accept Nixon’s offer of détente.  They also leaned on their Vietnamese clients to allow U.S. troops to withdraw from Saigon with a modicum of dignity.

China: always on the sideline?

China has kept out of the Ukrainian conflict so far. It has not lent support to the Russian aggression, but it has also been careful to refrain from criticizing it.

As things stand, it makes good geopolitical sense for China to throw its considerable weight behind Ukraine.

First, consider the fact that China has major territorial claims on Russia, which includes huge territories in Eastern Siberia and the Far East that the Russian Empire annexed in the 19th century.

These territories are being systematically populated by Chinese settlers and receive considerable Chinese investment. China is waiting patiently for the moment when it can seize them.

It would certainly make it beneficial to China’s strategic posture if Russia were hopelessly bogged down in a conflict on its Western border — or, even better, suffered a military defeat there.

Then the Putin regime could fall and Russia would be thrown into serious political turmoil.  That may make it easier for China to assert outright sovereignty over Russia’s Far East.

In recent years, China has been quietly active in global politics, supplanting Russia as the principal patron in parts of Central Asia. Acquiring an ally with the size and strategic importance of Ukraine on the post-Soviet space would undoubtedly be a coup for Beijing.

Finally, China is already investing in Ukraine. Its automotive companies see Ukraine as a perfect market for their proprietary brands. It is potentially vast, underserved and highly price-conscious.

Ukraine is one of the largest markets in the world for Chinese companies such as FAW, Great Wall, SAIC and others. They plan to use it as a steppingstone to an eventual worldwide expansion. In turn, Ukraine, once Europe’s breadbasket, could become a key supplier of agricultural products to the insatiable Chinese market.

China has been investing heavily in its military and developing advanced weapons. In the hands of Ukrainian soldiers, those weapons could be tested in real-life combat against a strong adversary.

True, Beijing rulers are extremely cautious. They may decline to supply weapons and provide military support to Ukraine for fear of antagonizing Putin.

But a visit to Beijing by the Ukrainian President may give a pause to Moscow, while giving Washington and Brussels a jolt.  It may force them to do what they should have done a long time ago, i.e., provide military assistance to Ukraine.

China has been active in global politics, supplanting Russia as the principal patron in parts of Central Asia.

Acquiring an ally with the strategic importance of Ukraine would undoubtedly be a coup for Beijing.

Ukraine, once Europe’s breadbasket, could supply agricultural products to the insatiable Chinese market.

China has been active in global politics, supplanting Russia as the principal patron in parts of Central Asia.

Acquiring an ally with the strategic importance of Ukraine would undoubtedly be a coup for Beijing.

Ukraine, once Europe’s breadbasket, could supply agricultural products to the insatiable Chinese market.