Wangari Maathai: Independence — Kenya’s and My Own

How did Wangari Maathai help change the social landscape of Africa?

How did Wangari Maathai help change the social landscape of Africa? 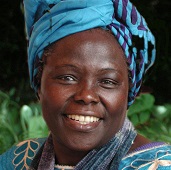 Author and Recipient of the 2004 Nobel Peace Prize Wangari Muta Maathai was the Presiding Officer of the Economic, Social and Cultural Council (ECOSOCC) of the African Union, based in Addis Ababa, Ethiopia, which advises the African Union on issues related to African civil society. In 1976, Ms. Maathai founded the Green Belt Movement, a […]

airobi in the 1960s was known as the Green City in the Sun. It was a pleasant place and very livable, and had many open spaces, although a number of them have since been built on.

Nairobi National Park, a piece of wild grassland that still sits on the edge of Nairobi, was much larger then, and the grasslands weren’t far from the city center. Nairobi then had fewer than half a million people, a sixth of its population today.

In the early years of independence and through much of Kenyatta’s time, most of the development in the country was concentrated in Nairobi.

Eventually, if you had nothing, you went to Nairobi. But in the 1960s, it was the professional class that came to the city. Although Nairobi was relatively small compared to, for example, New York, it was (along with Johannesburg and Cape Town) a main hub in sub-Saharan Africa — and we were proud of it.

There were no street children and no slums. Even Kibera, which is now the largest slum in Africa, had few inhabitants. Its land was still covered in trees and vegetation, although then, as now, there was little infrastructure. (Even today, Kibera’s half a million residents have limited access to electricity and running water.)

Nairobi’s buses then were seldom overcrowded, garbage collection was regular, and the whole city was clean. My women friends and I would regularly stroll among the small shops and cafés in the city center without fear of being mugged or raped.

My friends and I also enjoyed Nairobi by night. We went out to clubs, chatting and dancing to the British and American rock ‘n’ roll, rumba and all the dances then in fashion. In the 1960s, you didn’t dance alone! So a number of young men, many of whom had also studied in the United States, went out with my friends and me.

We had a comradeship based on our shared experiences in the United States. Nevertheless, while we were enjoying ourselves, we were also being constantly reminded by our close friends who were getting married that this freedom was probably not going to last forever.

While my family never put pressure on me to find a husband, my aunt Nyakweya the storyteller always made it her business to declare that a woman’s biological clock ticks constantly. Any time I attended a wedding in Ihithe, she would remark on the importance of a woman marrying in good time — not waiting for too long and not paying her debt to society.

She would look at me out of the corner of her eye and hope I was listening to her every word. I would smile back at her playfully, but I got the message!

In April 1966, I met Mwangi Mathai, the man who would become my husband, through mutual friends. He was a good man, very handsome and religious.

He had grown up in Njoro in the Rift Valley, not far from Nakuru, where his parents had relocated from Nyeri. He had also studied in the United States and worked for various corporations in Kenya before he entered politics.

Initially, I was disappointed I had not joined the Department of Zoology at the University College of Nairobi because anatomy is a very specialized science and I had wanted to study something more general.

However, gradually I registered for my Ph.D., for which I would be required to use an electron microscope. At that time, the University College of Nairobi had only one electron microscope, in the Department of Human Anatomy, so that is where I did my work.

It was very different to look at and handle the remains of a human being. It reminded me of my own vulnerability and insignificance, and that we should value our short time on this planet. I did not have the same reaction to the animal specimens.

I loved working with the students during their first years in their pursuit of doctorates in veterinary medicine. They came to us young, eager and vibrant. When I began teaching, all the students were male — and they found it difficult to believe that I had the qualifications to be their instructor in anatomy.

I was a woman, after all, and in my mid-twenties, so not much older than them. It wasn’t always easy to deal with the students or my male colleagues. The latter would often tease me: “Do you really have a master’s degree in biology?” they would ask.

I knew deep inside they doubted my capabilities, but I also knew I was better qualified than they were. As for the students, they quickly learned who was boss and to take their work seriously. A failing grade from me counted as much as it did from my male colleagues, and that was a language they understood.

However, the university’s full benefits accrued only to men. At that time, only single women or widows on the professional staff could receive university housing. Married women were expected to be housed by their husbands, and it was argued that they therefore did not “need” a housing allowance or insurance coverage or a pension.

I argued with the university that this was completely unacceptable and that terms of service must be equal. Professional women, I said, could not be discriminated against just because during colonial times no women professionals came to work in the colonies.

We went to the university officials and demanded an explanation for the gender discrimination. “You are married,” they informed us, shrugging their shoulders.

“You should just take the basic salary because the rest of the services that men get, you don’t need. Your husband is getting those services from his place of work and he should have you benefit from them. If he does not, too bad.”

We were outraged by the arrogance and what appeared to be men refusing to accept that a woman can be a professional in her own right. “Well, my husband doesn’t help me teach,” I argued, raising the alarm for battle.

In the end, however, the university must have decided that to maintain peace, the two of us should be given what we were asking for. From then on, although women colleagues continued to be paid less than their male counterparts and did not receive equal benefits, we were treated like honorary male professors!

We continued to campaign, urging women — especially those married to academic members of staff or civil servants (all of whom received superior terms and incentives) — not to sign discriminatory terms-of-service contracts that would, for example, deny their children the medical insurance coverage and deny them the pension granted our male colleagues.

However, the women refused to join us. Many said they’d been advised by their husbands not to be part of that struggle. Perhaps it is not surprising. Those women opposing our campaign were portraying us as women who didn’t want to live with our husbands, which of course was not true.

Fighting battles with women can be very difficult and sad, because both society and the women themselves often make it appear that most women are happy with the little they have and have no intention of fighting for their rights.

I am often confronted by women who have waited until that security called “man” is no longer available to them to remember that they should have protected their rights, irrespective of the men in their lives. That is when women will say, “You know how men are!”

Since then, things have changed quite a lot. Now there are quite a few women members of the academic staff at the university, and the terms of service have greatly improved for everyone, including women.

Author and Recipient of the 2004 Nobel Peace Prize Wangari Muta Maathai was the Presiding Officer of the Economic, Social and Cultural Council (ECOSOCC) of the African Union, based in Addis Ababa, Ethiopia, which advises the African Union on issues related to African civil society. In 1976, Ms. Maathai founded the Green Belt Movement, a […]

The Day President Kennedy (Almost) Broke the Embargo on Cuba