Where Would China Be Without Nixon?

What would today’s global economic landscape look like had Nixon not gone to China in 1973? 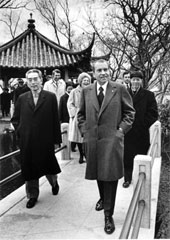 Richard Nixon was the first U.S. president to visit China while in office.

U.S. relations with China in the period 1949 to 1972 were very similar to U.S.-Iran relations today. They were stuck in a rut and nobody seemed capable of finding a constructive way forward.

Had President Richard Nixon not gone to China, in February 1972, we can assume that the isolate-China policy of the United States would have persisted much longer. President Jimmy Carter might well have attempted to thaw relations, but he, as a Democrat, would have met with strong opposition from Republicans.

It was said when Nixon opened to China that only a relatively hawkish Republican could have done it. Domestic opposition to the move would otherwise have been too fierce. It would probably have been left to the Reagan Administration to change the policy, probably in President Reagan’s second term (1985-89), when a general thaw in the Cold War occurred.

In these circumstances, with a U.S trade embargo in force, the Chinese opening to the world would have been very difficult to get going. The availability of the gigantic U.S. market was essential to provide the foreign exchange needed to develop Chinese industry and agriculture.

The first burst of increased Chinese exports happened remarkably quickly after China’s government changed orientation in 1976. Exports more than tripled in five years, from $7.3 billion in 1976 to $24.4 billion in 1981 — modest figures now, but a vital source of foreign exchange then.

The further increase in exports was then rather slow until an explosion after 1987. With the United States embargoing Chinese goods in 1976-81, the initial surge would have been impossible.

Had visits by Nixon and President Gerald Ford, who went to Beijing in 1975, not taken place, the official Mao-era vision of the United States as the Imperialist Wolves would have remained dominant among China’s decision-makers and most of its people.

This might well have been sufficient to tip the scales towards triumph for the Gang of Four, doubtless quickly followed by the liquidation of Deng Xiaoping and probably the moderate Hua Guofeng, Mao’s immediate successor.

Had this happened, there would certainly have been no opening to capitalism before death of Jiang Qing, Mao’s last wife, in 1991, and probably not for long thereafter. China today would well be the impoverished, economically unimportant country it was in the later years of Mao.

Almost every inhabitant of China (and the “almost” is purely there for courtesy) owes a debt of gratitude to Richard Nixon.

Without his action, the country would today be no freer than it is and its people would be immeasurably poorer than they are. It is, however, not clear whether Americans should also raise a glass to him for this development.

Had China remained in its Maoist cave, other countries, notably India and Vietnam (if that country had liberalized without China’s example) would equally have been able to provide cheap labor and skills to multinational corporations.

Indeed, some such countries — notably Indonesia, the Philippines and Pakistan — may also be counted as marginal net losers from Nixon’s opening and China’s subsequent emergence. They lost business they would have otherwise obtained.

The two major gainers from China’s emergence are consumers of Chinese-made products and the multinational corporations doing one-stop sourcing from China.

A third group — multinationals selling to China — has notably failed to make adequate returns. For every one of these companies eking out modest profits in China, there are ten that have found it a bottomless pit of loss.

Textile consumers have benefited spectacularly, with prices no higher today in nominal terms than they were 20 years ago. In electronics, 20 years ago, most gadgetry was assembled in the United States and Japan. Today its cost to consumers (or in Apple’s case, to Apple) is greatly reduced by the magic of Foxconn’s Chinese production system.

Without China, sourcing in East Asia, including Foxconn’s own Taiwan, would be possible, but the cost would be much higher.

We now come to the unquestionable gainers from China’s emergence. Just read the profit statements of multinational corporations. U.S. corporate profits are at a level in terms of GDP not seen since the glory days of 1929.

Thanks to China, Apple and its confrères are able to manufacture at — what used to be called — third-world wages and sell at rarified Western prices. That won’t last forever. Indeed, Apple’s shareholders already seem to see the shadow of a coming return to normal.

However, so far the profit wave, which was caused by China’s emergence and benefited top U.S. management, investment bankers and hedge fund managers, has been greater than in any other of the world’s great booms.

Almost every inhabitant of China today owes a debt of gratitude to Richard Nixon.

The official Mao-era vision of the United States as the Imperialist Wolves would have remained dominant among China's decision-makers and most of its people.

Almost every inhabitant of China today owes a debt of gratitude to Richard Nixon.

The official Mao-era vision of the United States as the Imperialist Wolves would have remained dominant among China's decision-makers and most of its people.

Reforming China — From Beyond Its Borders