Can Iceland Save the World?

The 2008-09 financial crisis forced Iceland to come up with profoundly new banking and monetary systems. 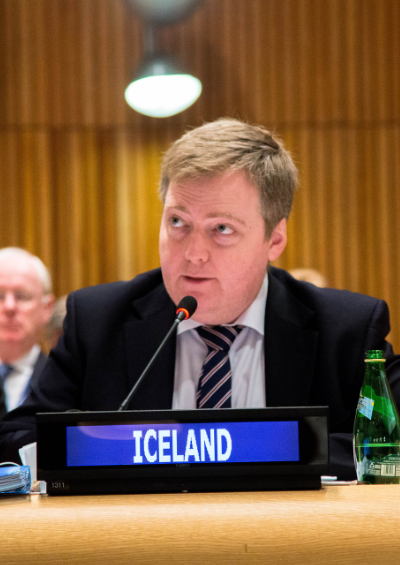 Just a few years ago, Iceland became a focal point in the global financial crisis, when the small country’s banking system collapsed.

Sometimes, a profound crisis leads to great new insights and strategies. Such is the case with Prime Minister Sigmundur Davíð Gunnlaugsson’s decision to have a commission of economists come up with a proposal for a fundamental reform of Iceland’s banking and monetary system.

The solution they came up with — the introduction of “sovereign money”– has applications far broader than just for tiny Iceland. Why? Because it would strip banks of their ability to create money and instead would concentrate this power with the central banks only.

This is an ambitious goal, no doubt – but it is hugely important. In today’s world, banks can create nearly unlimited quantities of money out of thin air – that’s why we speak about “fiat money.”

Note then, when you get credit from your bank, the bank does not lend you money, which was saved before by someone else. Instead, the bank just creates the money by the act of crediting your account. Accordingly, most of the money we use was actually created by private banks. Only a small proportion was created by central banks such as the Fed and the ECB.

Since 1973, when the last link of money to gold was given up, we have seen an unprecedented credit boom leading to more financial crises. The report prepared for Iceland counts 147 banking crises in 114 countries since that year.

Credit growth has been significantly higher than economic growth, leading to the current debt problems of private and public sectors.

In spite of all the headlines around quantitative easing in Europe and tapering in the United States, not to forget Abenomics in Japan, we have to keep in mind that in today’s world, central banks have only a limited and indirect way of influencing the process of money creation in the banking sector. The Bank of England pointed to this fact just recently.

The only means of influencing the process of “credit = money creation” is by setting standards like minimum reserves and interest rates: Measures like “quantitative easing,” where central banks buy assets like bonds and stocks, hoping to influence the real economy via the so called “wealth effect.”

Up to now, quantitative easing has not worked, as we can see in the United States. Yes, asset prices have gone up and the U.S. stock market is trading at lofty levels.

But real economic activity is still below pre-crisis trend and the labor force participation rate is significantly lower. In the case of another recession, the central banks have no ammunition left to fight it, as the IMF warned in its newest report.

No true reform of the banking system

In spite of all the soothsaying, seven years after the crisis we have made no real progress in fixing our monetary system. It can hardly be counted as progress that banks have gotten even bigger and that they thus have even more potential to blackmail taxpayers to rescue them in case of a new crisis.

Governments have tried to tighten relevant regulations, but with limited effect. In the 1930s, the Glass Steagall Act put the entire set of regulations onto 37 pages.

Today’s version, the Dodd Frank Act, tries to accomplish the same on 848 pages and the implementing regulations run an estimated 30,000 pages. That is a clear sign that banks still engage in way too many and far too complex activities — and will always look for loopholes.

For all their often very public wailing, banks continue to live in the best of both worlds. Profits remain private, whereas losses – cast as the costs of an unfortunate “accident” – will be borne by the public.

Only if banks could actually go bankrupt in case of mismanagement is it possible to envisage a continuation of today’s world of private money creation. Otherwise, it is time for a change.

It is not the first time in economic history that banks have overused their ability to produce money — and that over-indebtedness leads to significant economic problems.

Facing the Great Depression, a group of professors, including Henry Simons and Irving Fisher, drafted in 1936 the “Chicago Plan.” According to them, banks should be deprived of the ability to create money on their own and rather only lend out money that is truly deposited with them by savers.

In such a system, all money would be created by the central bank only. The goal they hoped for was a smoothing of the business cycle and fewer banking crises. In addition, a shift from the old to the new monetary system would allow reducing the debt overhang significantly:

A financial system that is more stable and less crisis-prone, where debt problems are solved? That sounds too good to be true. And indeed, the proposal was not implemented when it was proposed in the 1930s, due to significant counter-pressure by banks. They did not want to loose the highly profitable business of creating money.

Sovereign Money to fix all problems?

This makes it even more interesting that, a few years ago in 2012, two economists from the IMF, Jaromir Benes and Michael Kumhof, revisited the Chicago Plan of Fisher and colleagues and calculated the effects with today’s technology.

The paper is a good read and includes a brief look into the history of money.

Money was always a result of credit transactions and not a means to barter. Boom and bust cycles as well as a tendency to wealth concentration are inherent in this monetary system. Debt restructuring and a ban on interest were already well known in ancient times as described in the Bible.

Even the idea of sovereign money is not new. Luminaries such as Benjamin Franklin, David Ricardo, Thomas Jefferson and later Nobel Prize winner Milton Friedman (1967) were supportive of the idea.

The econometric analysis of the Chicago plan with today’s tools came to a convincing result:

■  A switch to sovereign money would work and the benefits would be higher than envisaged by Irving Fisher and colleagues.

■  In the case of the United States, it would even be possible to reduce parts of the private debt load as the balance sheet of the banking sector equals about 200% of GDP – more than the outstanding government debt.

■  According to the research, the growth rate in the United States would be higher due to lower real interest rates, lower taxes and lower costs for monitoring the credit quality of banks. The core function of banks, the efficient allocation of capital, would continue to function well.

Basically, such a switch would equal a monetization of existing debt. This does not have to be inflationary, as the money was already created in the past and would not lead to additional credits and demand.

This view is shared by experts such as Adair Turner, the former Chairman of the UK Financial Services Authority and Martin Wolf, chief economist of the Financial Times.

Not a system for all

But would such a system enjoy the trust of the public? After all, central banks have contributed to the crisis by pursuing a continuously one-sided monetary policy of lowering rates at every minor crisis. And since 2009, this has had the effect of boosting asset prices with limited benefit on the real economy.

In addition, the central banks’ actual degree of independence from governments can well be doubted. It is too tempting for politicians to use easy money to boost government spending and short-term economic growth.

In the view of Jaromir Benes and Michael Kumhof, these risks do not speak against a shift to sovereign money. Of course, one should not let criminals like John Law be in charge of the central bank or finance wars with it. He was the infamous Scot who invented a paper monetary system to solve the financial problems of the French king in 1717.

In both cases, the growth rate of money would be too high, leading to devaluation.

I still believe that, in spite of the justified criticism of central banks, especially given their poor performance in light of the financial crisis, it is worthwhile to take a deeper look at sovereign money:

■  It might be the best and most efficient way to deal with excess debt levels in the western world.

■  It would be an efficient way to limit the risks of the banking sector.

■  It would break the link between governments and banks.

Iceland is not alone in driving towards a shift to sovereign money.

In Switzerland a group of activists is preparing a referendum. The supporters calculate that the government would earn seven billion Swiss Francs from depriving private banks of the right of money creation and giving it to the central bank.

Applied to the U.S. economy, this would equal about $180 billion – per year!

Irrespective of the outcome of the discussions in Iceland and Switzerland, both admittedly small countries, it is an encouraging sign that we start to discuss the fundamental principles of our economic system and the role of money, credit and banks. It is time to change the system.

Tiny Iceland may offer up a way out of the global banking mess. #GFC

By severely limiting the power of banks, has Iceland shown the world how to avoid another financial crisis?

Iceland cuts links between government and banks: Will this model work for the rest of the world?

Tiny Iceland may offer up a way out of the global banking mess. #GFC

By severely limiting the power of banks, has Iceland shown the world how to avoid another financial crisis?

Iceland cuts links between government and banks: Will this model work for the rest of the world?

China at the Crossroads