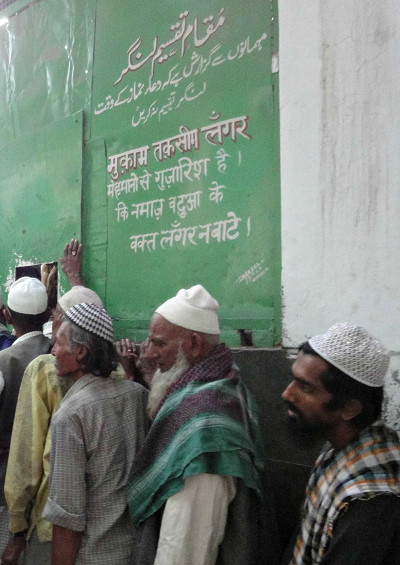 While the recruitment of Jihadist fighters for the war in Syria and Iraq has long been an international issue, it is now also gripping India. The country is the nation with the world’s second-largest Muslim population. No wonder security agencies are on alert.

Regarding the Islamic State, the government in New Delhi is broadly speaking pursuing a policy of low voice – or silence. Some seven million Indian citizens live in the Arab Gulf region, three million of them in Saudi Arabia. To protect these people has become a priority of Indian foreign policy.

To foil the mobilization drive of the “Islamic State” (or IS) terrorist militia, New Delhi has formally banned the outfit, stating that it is involved in “radicalization and recruitment of vulnerable youth.”

According to a chart published in The Times of India, the largest number of “foreign mercenaries” fighting for IS hail from Saudi Arabia, followed by Russia and Morocco. As many as 3,000 Saudi fighters have joined IS’s ranks.

India stands at the bottom of that table with just two recruits: This is a tiny figure considering India’s huge population of 1.2 billion, of whom some 180 million are Muslim.

It is quite obvious that IS propaganda has fallen on deaf ears with India’s Muslims. This is not due to the fact that the Arab-centered terrorist group has not given it a try: Propaganda videos targeting Indian Muslims praising the “Islamic State” have shown up with Hindi, Urdu and Tamil subtitles.

Also, Abu Bakr Al Bagdadi, the leader of the terrorist group, has claimed that India, along with neighboring regions in South Asia, belongs to the global Caliphate his group is fighting – and killing – for.

According to official accounts, only four Indian nationals have followed these calls and joined “Jihad” in West Asia, as the Middle East is often referred to in India.

According to the same accounts, only two of the four Indians who joined IS are still in the region. One of the recruits is said to have died in action, the other has returned home and was taken into custody.

“There is no widespread pull of ISIS in India,” says Alok Joshi, former chief of India’s foreign intelligence agency, Research and Intelligence Wing (RAW). He added that there was no immediate threat to India from young people joining the Jihadist outfit.

According to the ex-spy-chief, India’s authorities have managed to identify and prevent a number of young aspirants from traveling to the Middle East to join the IS militia. Importantly, those picked up seem to have been treated with velvet gloves: “These youth were counseled and handed back to their parents,” writes one newspaper.

Meanwhile, Indian security agencies have studied other countries’ practices in dealing with radicalized Muslim youth, among them counter-radicalization programs in the United States, the United Kingdom and Austria.

According to media reports, the Home Ministry in New Delhi favors the Austrian model, which includes a counseling hotline run by non-profit groups instead of the police. With the emphasis on counseling and not punishment, the idea is to provide professional help to “de-radicalize” radicalized youngsters.

India’s security apparatus considers the internet to be the main conduit for Islamist propaganda and, thus, a major menace. Social media, they say, has become a stomping ground for terrorist propaganda and the prime gateway for Islamic State recruitment efforts.

When Israel’s Defense Secretary, Moshe Ya’alon, visited India recently, the fight against terrorism was high on the agenda. The Indians are keen to learn from the Israelis how to effectively monitor the internet and neutralize militant Islamist propaganda in cyberspace.

Combating terrorist threats was also one of the hot topics at the highly publicized state visit of U.S. President Obama in India late January 2015. While the Indian side used that opportunity to once again decry violent assaults originating in Pakistan, Prime Minister Narendra Modi did not publicly mention possible threats emanating from the Arab world.

That there is reason for concern became apparent last summer when advancing IS forces kidnapped Indian nurses and construction workers. While the nurses were released after a short while, the 39 Indian construction workers are still in the hands of the IS and are referred to as “hostages” in local media reports.

The release of these individuals has become the prime objective – and preoccupation – of Indian diplomacy in that part of the world.

As long as these Indian citizens are in the captivity of the Islamic State, don’t expect a proactive Indian role in the international coalition against terrorism.

An unspoken fear that what happened to other foreign hostages in the hands of the IS terrorists could also happen to the Indians kidnapped in Iraq is holding New Delhi back.

The recruitment of Jihadist fighters is now also gripping India.

India has prioritized the protection of the 7 million citizens it has living in the Arab Gulf region.

The leader of ISIS has claimed that India belongs to the global Caliphate.

In India, the Middle East is often referred to as West Asia.

The recruitment of Jihadist fighters is now also gripping India.

India has prioritized the protection of the 7 million citizens it has living in the Arab Gulf region.

The leader of ISIS has claimed that India belongs to the global Caliphate.

In India, the Middle East is often referred to as West Asia.