Dubai: The Casablanca of Today?

If the classic film Casablanca were made today, it would be set in Dubai.

If the classic film Casablanca were made today, it would be set in Dubai. 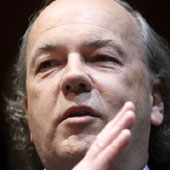 Investment banker and author James Rickards is the senior managing director at Tangent Capital Partners LLC, a merchant bank based in New York City. He is also the senior managing director for market intelligence at Omnis, Inc., a technical, professional and scientific consulting firm located in McLean, VA. Mr. Rickards is a counselor, investment banker […]

If “Casablanca” were filmed today, it would be called “Dubai.” The classic film centers around Rick’s Café Américain, where the owner, played by Humphrey Bogart, offers drinks, music and gambling, with intrigue on the side.

The exotic setting was Morocco during World War II. What defined Casablanca was its neutral mélange where enemies could mingle at ease. Nazis, refugees and gunrunners sat at adjacent tables to drink champagne and sing “As Time Goes By.”

That’s just like things are in Dubai today. It is an island of relative calm surrounded by wars in Afghanistan and Syria, instability in Iraq and Lebanon, transition in Tunisia and Egypt and bitter enmity between Israel and Iran. It is the ultimate bad neighborhood.

In place of Rick’s, there is Atlantis, an over-the-top resort on the artificial Palm Island, itself dredged from the seafloor and laid out in a palm shape so vast it can be seen from space.

Inside Atlantis are the best restaurants in town, where Israeli agents, Iranian provocateurs, Russian hit men, Saudi arms dealers and local smugglers sit side by side, escorted by tall, leggy blondes who look distinctly out of place in the desert.

What they find in Dubai is what Rick’s customers found in Casablanca — a neutral turf where they can meet, recruit and betray each other, all without immediate fear of arrest. That is what makes Dubai so conducive to international intrigue.

The weather is excellent from October through March. Dubai is in the midst of a danger zone, surrounded by Mumbai, Lahore, Tehran, Istanbul, Cairo, Khartoum and the pirate dens of Somalia.

It has excellent air and telecommunications links with the world. It is also famously overbuilt — boasting the world’s tallest building and plenty of other post-modern glitz to dazzle visitors from more traditional and repressive societies.

All this glamour and intrigue are accompanied by some Hollywood-style violence. In March 2009, a Russian warlord was shot dead in the upscale Marina section of Dubai near some its best beaches and hotels.

Two suspects, one Tajik and one Iranian, were arrested and gave confessions implicating a member of the Russian Duma acting on orders from Ramzan Kadyrov, the strongman of Chechnya. In a touch straight out of Ian Fleming’s “The Man with the Golden Gun,” the victim was shot with a gold-plated pistol smuggled in by a Russian diplomat.

Historically, Dubai thrived on two activities, pearl diving and smuggling. Today, pearl diving is a small business carried on in part as an attraction for tourists. Smuggling is bigger than ever.

The long wharf on the Creek, the old part of Dubai, is piled high with electronics, appliances, spare parts and other goods headed for Iran. The amount of gold and currency inside boxes marked with Sony or HP logos is anybody’s guess.

Across Baniyas Road, which runs alongside the wharf, are Iranian banks where letters of credit can be arranged on the spot to finance the shipment of goods — without regard to U.S. trade sanctions.

On the Creek itself are the dhows — beamy, high-prowed wooden sailing vessels with large lateen rigs ready to embark on the voyage across the Persian Gulf to Bandar Abbas and other ports on the Iranian coast. In Dubai, smuggling is not even vaguely disreputable. Rather, it is a way of life.

Dubai is an international financial center and tax haven, as evidenced by the fact that its boulevards and backstreets are choked with international banks.

Dubai is the principal offshore banking center for Iran. Major Dubai banks act as correspondents to Iranian banks for the facilitation of payments and foreign exchange transactions with the rest of the world, including Iran’s conversion of its reserves into euros and gold and slow dumping of the dollar.

Dubai also acts as the banking center for the Somali pirate trade. While pirates, hostage crews and patrolling navies engage in standoffs in the Arabian Sea, pirate agents make the rounds in Dubai to negotiate ransom and provide wire instructions for final payment.

For tangible wealth, there is the gold souk, one of the largest marketplaces in the world, where gold in every form — jewelry, coins, bars and ingots — is for sale and re-export in attaché cases to private hoards around the world, no questions asked.

Dubai has a commodities center with separate glass skyscrapers named after the Arabic words for gold, silver and diamond. Beneath these towers is one of the largest, most secure vaults in the world, managed by Brink’s.

With Swiss banking secrecy under attack and oligarchs being harassed in Russia, converting wealth into untraceable gold and securing it in the desert is an attractive strategy.

The gold that changes hands in the souk is the tip of the iceberg of wholesale wealth that transits Dubai. Paper currencies move continuously from engravers to central banks to customers, much of it circulating outside its home country.

Dubai is the world’s largest transshipment point for paper currencies. At secure sites near the Dubai airport, massive amounts of banknotes are stored, awaiting return to their issuing banks.

Espionage, assassination, gold, currency and an international mix of actors at the crossroads of the world give Dubai its standing as the new Casablanca. Dubai, like Casablanca, is just a mirror of its time and place. Were it not for the corruption and dysfunction of the wider world, Dubai would have no clientele.

Every war needs its neutral venue, and in the currency wars Dubai fills the bill. There is no currency anywhere that is not money good in Dubai — at a price.

Editor’s note: This article is adapted from Currency Wars: The Making of the Next Global Crisis (Portfolio/Penguin) by James Rickards. Published by arrangement with Penguin. Copyright © 2011 by James Rickards.

Dubai is an island of relative calm surrounded by wars in Afghanistan and Syria and instability in Iraq and Lebanon.

Dubai acts as the banking center for the Somali pirate trade. Pirate agents make the rounds to negotiate ransom and provide instructions for payment.

Investment banker and author James Rickards is the senior managing director at Tangent Capital Partners LLC, a merchant bank based in New York City. He is also the senior managing director for market intelligence at Omnis, Inc., a technical, professional and scientific consulting firm located in McLean, VA. Mr. Rickards is a counselor, investment banker […]

Dubai is an island of relative calm surrounded by wars in Afghanistan and Syria and instability in Iraq and Lebanon.

Dubai acts as the banking center for the Somali pirate trade. Pirate agents make the rounds to negotiate ransom and provide instructions for payment.