What is involved in preparing a U.S. President’s trip abroad? 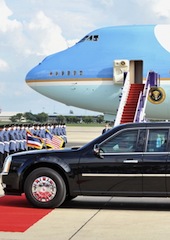 This week, U.S. President Barack Obama attended the memorial service for former South African President Nelson Mandela, along with nearly half the sitting heads of state from around the world. Sending the U.S. President abroad is always a particularly big logistical challenge, even without competing for space with that many other global leaders.

Case in point: U.S. President Obama made his first extended trip to sub-Saharan Africa earlier this year in June 2013 — here’s what it took to make that trip happen:

1. Hundreds of U.S. Secret Service agents were dispatched ahead to secure facilities in Senegal, South Africa and Tanzania.

2. A U.S. Navy aircraft carrier or amphibious ship, with a fully staffed medical trauma center, was stationed off shore in case of an emergency.

3. Military cargo planes airlifted in 56 support vehicles, including 14 limousines and three trucks. The latter were loaded with sheets of bulletproof glass to cover the windows of the hotels where the first family stayed.

4. Fighter jets flew in shifts, giving 24-hour coverage over the president’s airspace, so they can intervene quickly if an errant plane gets too close.

Hundreds of Secret Service agents were dispatched ahead of Obama's June 2013 Africa trip to secure facilities.

Hundreds of Secret Service agents were dispatched ahead of Obama's June 2013 Africa trip to secure facilities.

The Need for Hard Diplomacy