Germany and France: Stick Together on Greece

How will the end game on Greece’s proposals play out? 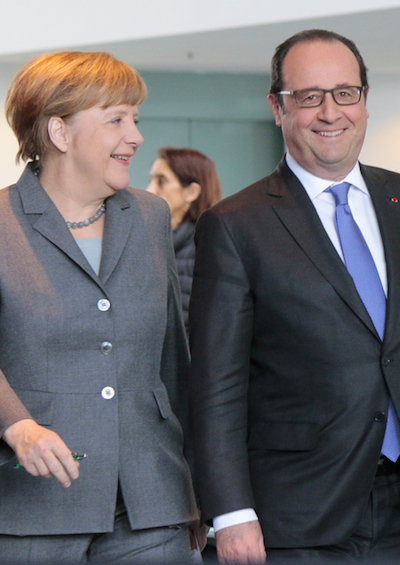 After the Greek proposals have been submitted, we may see a last-ditch attempt, led by Germany and France, to “edit” the Greek proposal in a way that they become acceptable to the IMF. This would then be the document which Mr. Tsipras either accepts or rejects ahead of the decisive EU summit on Sunday.

One purpose of this last round of talks is to explore the chance of a last-minute deal with Greece, despite the damage done by the referendum and the resulting further plunge in the Greek economy.

But at least as important is the attempt to bridge the differences within the eurozone on the crisis. This doesn’t so much pit Germany against France, but rather features those in the eurozone who are simply fed up with Greece (ask any policymaker in the Baltics and Slovakia, for example) and the French Socialists who still hope to keep Greece in.

As a result, Europe will likely strive to have a joint position, de facto a French-German proposal endorsed by the IMF. If Alexis Tsipras then accepts that proposal and also manages to get it through his parliament, probably losing his left-wing in the process, fine.

If not, he would have rejected a joint French-German position. That would help to avoid a blame game between France and its partners to the North and East of the Rhine — if Greece really falls into the abyss on Monday.

We may see a last-ditch attempt, led by Germany and France, to “edit” the Greek proposal.

We may see a last-ditch attempt, led by Germany and France, to “edit” the Greek proposal.