What tied Germany and the United States together for over two centuries? 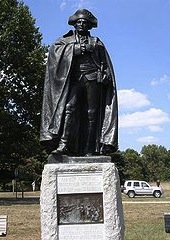 “America, you have it better than our continent, the old one.”

Johann Wolfgang von Goethe’s famous comment a quarter of a millennium ago bears testimony to the remarkable German-American love affair that has endured into the 21st century, despite two world wars.

Goethe’s comments were not lightly made: To liberal, educated Germans of the 18th century, especially in the Protestant northern half of the country, the American Revolution was the embodiment of their hopes for human freedom and enlightenment.

All the more ironic, then, that it was George III of the House of Hanover, an English king with a German father, who tried to crush the growing demands for freedom and constitutional self-government by the 13 original American Colonies.

And, to add further punch, the backbone of the army he sent to crush the American Revolution was composed of mercenaries mainly from the German state of Hesse — the region now home to the European Central Bank.

Like all the best jokes, this one had an element of historical truth. But it would also be accurate to portray the American Revolutionary War as a war between two sides of Germany and German thought.

Von Steuben and the Rag-Tag Americans

Liberal Germans strongly supported the American Revolutionary cause and they gave them a crucial military asset who single-handedly more than counteracted the impact of the Hessians.

That one-man force was Baron Friedrich Wilhelm von Steuben, a pioneer German staff officer under Frederick the Great. (He was never a Prussian general, contrary to popular myth.)

Von Steuben was that unexpected, but surprisingly common phenomenon, the professional soldier who was also a selfless idealist.

He came to America to support the Revolutionary cause and rapidly rose to the crucial positions of inspector-general and major general in George Washington’s Continental Army.

He was crucial in teaching Washington’s raw, untrained and rag-tag force the basic elements of military drill, tactics and discipline — especially the use of the bayonet.

Von Steuben even wrote the Revolutionary War Drill Manual, a work that served as the standard military drill manual for American military forces for some three decades up to the War of 1812, also fought against the British Empire.

Washington came to rely upon von Steuben as his most important military advisor. His contribution was in its own way more important than that of Gilbert du Motier, Marquis de la Fayette, commonly known as “Lafayette.”

Von Steuben worked closely with General Nathaniel Greene in leading and directing the crucial campaigns in the South that turned the final tide of the war in the Americans’ favor.

He also commanded one of Washington’s three divisions in the climactic Yorktown campaign that decided the war.

Statues to him stand (among other locations) in Lafayette Park in Washington, D.C. in front of the White House and at Valley Forge, where Washington’s army survived the cruel winter of 1777-8.

General von Steuben risked life and honor to make the Continental Army of the George Washington capable of standing up to the German mercenaries of George III.

Later, 19th century Protestant Prussians were appalled by the evils of Slavery and saw the Union cause in the American Civil War as divinely ordained.

Their essential goal was to restore America to the path of being the glowing example of human freedom that 18th century idealists like Goethe and von Steuben had also envisaged.

Even Friedrich Nietzsche, the anti-democratic, romantic extremist philosopher of race and ruthlessness, admired America so much that he seriously contemplated emigrating there.

Historically, German liberals always regarded America as their spiritual home: This was most pronounced after the repression of the Frankfurt Assembly of 1848-49.

When that liberal revolution failed, tens of thousands of idealistic young Germans came to America and settled across the West. They became the backbone of the anti-slavery movement in the following decade.

Hitler’s seizure of power in 1933 led to an even more epochal flood of German liberals to the United States.

They made an enormous contribution to American science, literature and popular culture over the flowing half century.

They included the great movie directors Fritz Lang and Billy Wilder, as well as Erich Maria Remarque, the author of the greatest novel of World War I, All Quiet on the Western Front.

Viewed from this perspective, it was the tragic and destructive heyday of German militarism during both world wars and the brief, catastrophic Nazi era that were the aberrations from a much more sustained and deeply-rooted German tradition of admiring America for its freedom, democracy and tolerance.

The continuing close ties between the United States and the highly successful postwar Federal Republic of Germany over the past six and more decades bear testimony to this deep and generally brighter reality.

But it also underscores the profound disillusionment about U.S. illiberalism in the N.S.A. affair. The revelations do not jibe with the United States that Germans have come to admire and support for centuries.

German contributions to U.S. life have far deeper roots than most people in either country realize.

One joke says the American Revolution was a civil war between English Americans and English-hired Germans.

German liberals saw America as their spiritual home. In 1849, thousands of young liberals fled to America.

German contributions to U.S. life have far deeper roots than most people in either country realize.

One joke says the American Revolution was a civil war between English Americans and English-hired Germans.

German liberals saw America as their spiritual home. In 1849, thousands of young liberals fled to America.