What does the shaky fate of the U.S. consumer electronics chain portend for the economic future of the United States? 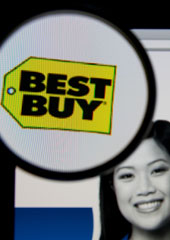 Best Buy used to feed the U.S. public’s big appetite for electronic gadgets. Now, there are far fewer customers in its stores. Why? The baby boomers have everything they need. Meanwhile, the young people and the growing Latino population do not have access to credit.

The saga of Best Buy points to a broader problem confronting the U.S. economic model.

It just took another dive, owing to weaker Christmas season sales than expected.

It wasn’t so long ago that big box stores were all the rage in the United States. They offered to fulfill every desire of a consumption-hungry public. Endless rows of the latest products were all available at rock-bottom prices, thanks to the merchandiser’s aggregated purchasing power in the market.

Fueled by a debt binge, U.S. consumers bought to their heart’s content, with little regard for what amount of money they really had in their pockets. Best Buy seemed like an incarnation of the brave new world, delivering on the American Dream of instant gratification of any and all material desires.

And so it was that all the latest stuff flew off the shelves. Successive generations of flat screen TVs, ever larger, lighter, cheaper, better. Same for digital cameras. And PCs. And laptops. Cell phones. Cooking ranges. Refrigerators. Washing machines.

You get the drill. The range of products offered was vast, the stores full and the lines at the “cashier” (in reality, the credit card charge counter operator) were long.

So much for the past. If you go to a Best Buy these days, you get an odd sensation. One actually has personal space, lots of space. It used to be that massive amounts of people were hunkering down on the shopping floor.

Back then, it was also nearly impossible to get advice or ask a question of a sales clerk.

That is still a problem — even though it should be much easier now to hunt down a sales associate, since there are very few customers in the stores. The reason why this remains a frustrating problem is that, along with fewer customers, there are ever fewer sales associates on the shopping floor. That is a clear sign of the deep crisis the company is in.

A closer look at who is still frequenting the stores reveals that it is mostly young people and Latinos. Advertising hype notwithstanding, neither of those groups is known for its vast spending powers in the consumer electronics market.

This, then, is the brave new American shopping world: Those who are equipped with spending power are much more likely to frequent an Apple store when — and if — they still need something. But by and large, the baby boomers are simply shopped out. They have all the flat screen TVs, ovens, dishwashers, etc. etc. that they can imagine buying. With real product innovation slowing down in most product categories, there is little reason to buy.

Another factor is that consumer credit remains generally tight. No matter how much retail industry analysts in their cheery comments to the news media want to convince consumers otherwise, ample credit is available only to those who already have everything they need. And credit remains restricted for income groups that still have pent-up demand.

Best Buy’s problem is said to be one of management troubles and of high fixed costs. The first is true, but ultimately a convenient sideshow. The second is certainly a gruesome reality.

In the eternal race to squeeze out costs, it is now the former vampires — the big-box stores — that get sucked dry. In their prime, big-box stores took down many a smaller retailer, with their then superior cost structure.

They turned employees into sales associates, paid them on an hourly basis, usually with very low, if any benefits. They squeezed manufacturers with their constant demand for lower prices.

That formula worked well for a long time. But now the vampires have turned into dinosaurs. They are “so yesterday,” because they foolishly held on to the concept of physical stores and having a sales force, both major cost factors due to rent, utilities and personnel costs.

For their continuing courage to populate the local sales scene, the big-box stores actually get penalized by having to impose on their customers a surcharge in the form of the sales tax. In most U.S. states, sales tax is still not charged for online sales — even though that self-destructive trend may now be changing.

All of this pretty much adds up to the good old adage of three strikes and you are out. The key question that needs to be addressed, though, is not the commercial fate of an individual company. That is a concern mostly for its shareholders — and the remaining employees (correction: “associates”).

The really intriguing question about Best Buy is whether its fate is paradigmatic for the entire United States. The sociological profile of store visitors would suggest that it is. As observed above, many young people under 18 and Latinos.

The United States, comparatively speaking, has a relatively young population and the country’s minorities, in the aggregate, are in the process of becoming the majority.

Minorities still have pent-up demand for durable consumer goods. So they potentially make an ideal customer target group. Were it not for the continuing effects of the 2007/8 financial crisis.

Employment levels remain suppressed and the degree of underemployment is high. That depresses disposable income, especially for lower-income groups. Many minority families still belong to that demographic. For them, the availability of credit for them is especially tight.

The story with underage young people is mostly the same. Given the emptiness of their pockets, they, too, are forced predominantly to shop with their eyes.

This means that Best Buy faces a hard time converting these potential targets into actual customers, even though they do visit the shops. Just consider that a relatively large share of Latino men was employed in the U.S. construction sector, which remains sub par, despite a need for more rental housing.

These considerations are precisely what make the fate of Best Buy into such a potent symbol of the challenges that will soon be faced not just by individual big-box retailers that may be past their prime, but also by the United States at large.

It would be convenient to assume that the story that is playing out at Best Buy is just about its wrong turns, management upheaval and the like. The odds are that it points to a much broader problem confronting the entire U.S. economic model.

It's tempting to think the story of Best Buy is just about a firm making wrong turns, including management upheaval.

In the eternal race to squeeze out costs in the modern economy, the former vampires (big-box stores) get sucked dry.

Best Buy shoppers are mostly young people and Latinos these days. Neither customer group is known for vast spending powers.

Ample credit is available only to those Americans who already have everything they need.

Best Buy seemed like an incarnation of the brave new world, delivering on the American Dream of any material desires.

It's tempting to think the story of Best Buy is just about a firm making wrong turns, including management upheaval.

In the eternal race to squeeze out costs in the modern economy, the former vampires (big-box stores) get sucked dry.

Best Buy shoppers are mostly young people and Latinos these days. Neither customer group is known for vast spending powers.

Ample credit is available only to those Americans who already have everything they need.

Best Buy seemed like an incarnation of the brave new world, delivering on the American Dream of any material desires.

The Limits of China’s Globalization Strategy