Why might the Bush clan be secretly rooting for Hillary Clinton’s presidential fortunes to improve? 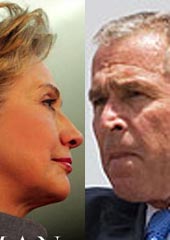 Americans readily describe their democracy as the most vibrant on earth. And foreigners readily concede that the United States is not exactly a country given to traditions. What’s hot today may be a complete unknown tomorrow.

Given those widely held assumptions, virtually everybody should be stunned at the prospect of two hyper-political families — in a father-son and husband-wife combination, respectively — holding the reins of American power for 28 consecutive years.

Even the tradition-bound Japanese, who for eons have organized their politics based on clans, feel disoriented.

It is a moment to savor: The United States may outperform even Japan on the matter of political inheritance — and compete head-on with certain Middle Eastern nations on the issue of family domination of national politics at the highest level.

And yet, for all the bad blood between the Bush and Clinton clans (and a more-than-grudging respect for the other side’s ability to stage a comeback), the Bushes may be in for a period of eating crow.

But any Democrat delirious about the Clintons’ retaking of the White House should pause for a moment.

Assuming she makes it there — a prospect that Barack Obama’s rise has made less likely over the past several weeks — the real question before the nation and the world is this: What are the odds that Hillary Clinton will share the fate of Bush Sr. — and be a one-term president?

The Bushes, for sure, would like to have it that way — lest the Clintons have a real upper hand on the numbers’ score of which clan (for now) occupied the White House for longer.

But irrespective of the answer to that question, the Bush clan does not feel too bad about the prospect of Hillary’s elevation. In fact, as they see it, but won’t say out loud, it would be a kind of biblical justice if Hillary took 1600 Penn.

The Bushes’ real grudge against Bill was not just that this upstart huckster from Arkansas denied the patrician George H.W. Bush what he understandably considered his well-earned right — a second term.

Instead, he ended up like Jimmy Carter — tossed by the wayside ignominiously after just four years. Not just in hindsight, Mr. Bush had a solid case for his reelection.

On the international front, he did not just preside — but helped shape — fundamental changes on the world stage, with the dissolution of the Soviet Union, the unification of Germany and freedom for all of Eastern Europe.

On the economic front, well, yes, there was the recession of the early 1990s, but Father Bush actually had a team of economic advisors that was truly operating in the nation’s — not just the Republican party’s — best interests.

Faced with rising unemployment, his advisors understood the core advantages of the U.S. economy — its flexibility, vigor and ability to successfully take risks.

Based on that analysis, they felt it best to let the adjustment processes in the economy run their course — in order to have a real economic bounce back in Mr. Bush’s second term.

And even more courageously, given an imbalance on the fiscal front, they did agree with the Democratic majority in Congress on a nowadays very un-Republican thing — raising taxes so that order could eventually be restored to the nation’s fiscal house.

And they proved to be right. The economy bounced back, as envisioned. And soon enough, even the seemingly dismal fiscal situation improved tremendously, generating sizable budget surpluses that allowed the nation to pay down its debt.

Trouble was, while all those events did indeed materialize, it wasn’t under Mr. Bush’s stewardship anymore — for he had been defeated in November 1992, in a three-way race with what effectively were two Republicans running against one Democrat.

That split the Republican vote — and tossed the election to the young Democratic upstart, Bill Clinton.

Sunshine Boy that he was, Bill Clinton wasted no time in taking full advantage of the previous Bush team’s accomplishments on the economic front. All he really had to do was show up for work, mouth the right words — and wait for the happy results to roll in.

And roll in they did. Aided by the Internet revolution of the 1990s, Mr. Clinton presided over a growing economic pie and ever-rising tax revenues.

No wonder the Bush clan felt robbed. The father had done all the right things — but was denied reaping the fruits of his labors by that smooth-talking man from the South.

To Mr. Clinton’s credit, and as a definite sign of how well aligned the stars were in his favor, during his stints as the head of the National Governors’ Association and the Democratic Leadership Council, he consistently talked about the need for fiscal prudence.

That made him not only a credible reaper of Bush Sr.’s economic prescriptions, but also gave him the aura of a miracle doctor, a man who had the courage to mouth the right words — with his rhetorical flourishes turning into reality soon after.

That “magic” is what really upset the Bush clan. George H.W. Bush had done nearly everything right — except for the family’s traditional stumbling block, an inability to communicate in a clear, concise and inspiring manner. Advantage Clinton.

But now, 15 years later, the Bushes no longer feel so robbed. If elected, Hillary will not inherit a Rose Garden, as Bill had from Bush, the 41st U.S. President — but a real mess, from Bush 43.

That is why the Bushes may not feel the loss of the White House fall upon them. Instead, they may be seized by a bout of joy.

Hillary may get to the White House, but as soon as she gets there, she will have so much shoveling to do that it would be quite enough penance for both Clintons combined.

From the Bushes’ perspective, the time has finally come for Mr. Clinton — and the Mrs. — to pay the family for every ounce of the good luck he bumped into so undeservedly when he was elected and stood tall on what were Bush’s policy accomplishments.

Iraq, the debt, the overleveraged economy, more competition for the United States, an uneasy middle class, fewer friends internationally — you name it, a patrician George H.W. Bush sighs with inner satisfaction, leaning back in the armchair by that gorgeous window at his Kennebunkport, Maine estate.

“Doesn’t anybody remember why I always thought that our son Jeb — but definitely not George Jr. — should serve in the White House? What I don’t understand is why anybody would want that job now. But the Clintons sure deserve to have it.”

From one political dynasty to another, as Bush Sr. sees it, it’s high time to let the Clintons show their real mettle.