After exhausting its basic growth model, how can China nurture productivity, innovation and modernity? 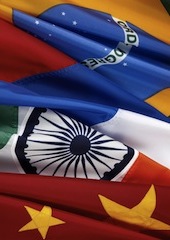 Another way of thinking about China’s end of extrapolation and the Asian miracle is to consider the wider universe of emerging markets. Specifically what happens to the dynamic of rapid growth and human development, as Asia inevitably slows down economically?

We know growth slows with maturity, but many countries tend to stall, in terms of income per head, in a “middle-income trap.”

George Magnus:
The Slowing of China
China and the End of the Magic of Extrapolation
Is Asia’s Economic Miracle Over?
China: Hitting a BRIC Wall

The critical level seems to be around per capita income of approximately $15,000 at today’s prices.

This isn’t the end of growth. But to break out of the middle-income trap, or to jump over the BRIC wall as we might say, countries that have exploited more basic models of growth need to adopt “smarter” economic models.

These models must be designed to nurture total factor productivity, innovation and modernity.

Scaling the wall is possible, but it isn’t about spreadsheets or economic forecasting. Rather, it is about politics, rules-based systems and an array of economic and social institutions that re-energize economic growth.

By comparison, exploiting things like labor transfer to urban manufacturing and gains from importing foreign technology are the low-hanging fruit. Plus, they have been largely exhausted.

For many emerging markets, this isn’t an academic challenge anymore. They realize that the rise in total factor productivity growth in the decade to 2008 — or surge in the case of Asia — has slowed considerably, notwithstanding the 2010 bounce.

In China, it has halved from about 4% to about 2%. India, though much poorer, has seen total factor productivity slow to a stall.

Indonesia and Turkey were the only major emerging countries where more narrowly specified labour productivity growth is projected in 2013 to be comparable with the period 2006-2011. But the trend pretty much everywhere is down.

By looking at the maths of economic growth, and the number of years that countries remain in lower- or upper-middle income ranges, the Levy Institute has observed that there were 52 middle-income countries in 2010, 35 of which were “trapped.”

Of these, 13 were in Latin America, 11 in the Middle East and North Africa, 6 were in Sub-Sahara Africa, 3 were in Asia, and 2 in emerging Europe. Of the remainder, 8 were likely to become trapped.

The exclusion of India and China is partly because they haven’t been in lower middle and upper middle ranges, respectively, for very long yet. And partly, it is because the economic potential for progress is relatively robust.

The key point, though, is realizing that potential and monetizing the consequences. And that’s about political will and reform.

Empirically, the chances of slower economic growth leading to “entrapment” are linked to a number of important developments.

Extremes of income inequality are also viewed increasingly as a contributor to getting trapped.

Political and social implications aside, they may restrict consumption, especially of discretionary goods and services like education.

They may result in tensions that compromise sound macroeconomic management and lead to permissive credit conditions.

They can be associated with degrees of capital flight, and sustain overly high savings and investment rates, retarding structural change and increasing risks for financial instability.

The 14 countries, for example, that avoided hitting the BRIC wall over the last 50 years shared a common characteristic of relatively low income inequality.

Their average Gini index was 33 in a range of 26-39. In today’s high-income aspiring group of emerging countries, none has an index below 40 and the average is 46.

The World Bank and the Chinese State Council’s Development Research Center noted in their China 2030 report in 2012 that, of the 101 countries or territories that were classified as middle income in 1960, only 13 jumped the so-called BRIC Wall.

In contrast to such countries as Mexico, Venezuela, Argentina and Uruguay in Latin America, and the old Soviet Union, these countries implemented political reforms, to produce desirable economic behaviour, more efficient organisation, political checks and balances, and penalties and importantly, incentives.

They built trust, rules, good macro, corporate and social governance, and property and land rights and the rule of law, into national institutions.

That, in turn, facilitated their capacity to extend their technological frontiers.

They lowered levels of income inequality, strengthened social and income support for poor urban and rural workers, and realized strong gains in total factor productivity from a sharper focus on entrepreneurship and innovation.

It isn’t an accident that the high-income club is small, or that jumping the BRIC wall is hard.

Of the IMF’s 180 members, only 35 are considered high income.

This sort of distribution hasn’t changed a great deal in 60 years, and longer.

Editor’s note: This is the concluding part of a three-part series. Read Part I here and part II here.

For many emerging markets, this isn't an academic challenge anymore.

Realizing economic potential for progress and monetizing the consequences is about political will and reform.

For many emerging markets, this isn't an academic challenge anymore.

Realizing economic potential for progress and monetizing the consequences is about political will and reform.

Is Asia’s Economic Miracle Over?