Breaking the ties between organized crime and official corruption. 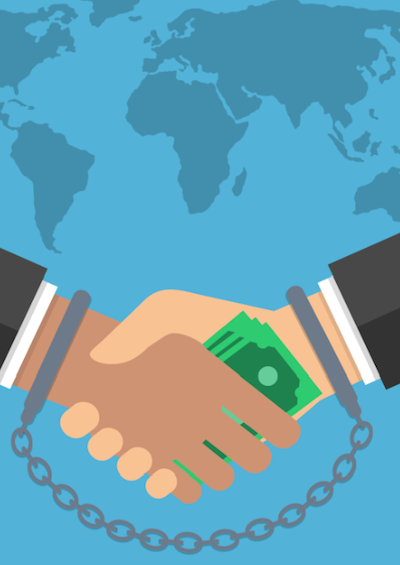 In Afghanistan’s in the northeastern province of Badakhshan, two rival warlords – both allegedly with ties to the Taliban – are competing to control the illegal mining and smuggling of the valuable lapis lazuli mineral.

According to the findings of a two-year investigation by Global Witness, the revenues from their dealings are estimated to equal the Afghan government’s declared income from the country’s entire Afghan natural resources sector.

The ties between organized international crime networks and grand corruption – i.e. the systemic erosion of government functions and public confidence – are an increasing security threat.

It is a prominent feature in such countries as Pakistan, Afghanistan, Somalia and Nigeria, where organized crime flourishes.

There, corruption abounds in almost every corner of government and business. The environment is hospitable to such terrorist networks as the Taliban, El-Shabah and Boko Haram.

Recent statements by U.S. Secretary of State John Kerry suggest a mounting awareness of the issues and the need for action to break the organized crime-grand corruption nexus.

For too long the U.S. government and its NATO allies have seemingly hoped the problems would just go away, ignoring the evidence and so failing, for example, to effectively confront:

Professor Louise Shelley at George Mason University, author most recently of “Dirty Entanglements: Corruption, Crime and Terrorism,” journalist Moisés Naím who wrote the landmark book on counterfeit goods, “Illicit”, and numerous others have documented the scale and seriousness of the organized crime-grand corruption nexus.

Blood diamonds and beyond

Non-governmental organizations have been increasingly active in this area, notably the U.K. defense and security section of Transparency International, as well as Global Witness. The latter for many years has reported on “blood diamonds” and the financing of illicit arms to support African civil wars.

Against this background it is noteworthy that Secretary Kerry publicly addressed key aspects of the issue when he said at the London anti-corruption summit in mid-May:

Criminal activity literally is a destroyer of nation-states because it contributes to drug trafficking, arms smuggling; it contributes to human trafficking; it becomes the facilitator of activities that create sub-states – in some cases deep states – within states, and we’re left struggling, fighting. It is a contributor to terrorism, my friends, in many different ways. And the extremism that we see in the world today comes in no small degree from the utter exasperation that people have with the sense that the system is rigged.

Kerry backed up his comments with the release of an official statement that may be the first of its kind to commit the U.S. government to explicit actions on the security-corruption front.

It noted in part:

These policies need to be augmented by both increased diplomatic efforts to try and bring the Russians and Chinese and Pakistanis and others, to the table to find ways to cooperate against organized crime.

Further, the U.S. needs to provide leadership by boosting significantly the resources of the FBI. The Bureau is better equipped and more experienced in the field of cross-border crime than any other official enforcement agency in the world.

It is clear, despite Kerry’s encouraging words, that there does not yet appear to be sufficient resolve among Western governments to meaningfully break the organized crime-grand corruption nexus across the world.

Actions tend to be piecemeal, investigating some money laundering connections involving the narcotics cartels in Central America, or wildlife poaching in Eastern Africa. But this is not addressing the issues on the major global scale that is required.

And so the corrupt politicians get richer and the organized crime networks expand.

In a number of countries in sub-Saharan Africa, for example, law enforcement lacks the skills and the funds to take on the major criminal networks. They bribe customs, port and security officials as they trade in narcotics, ivory, slave labor and weapons.

The bribe-taking by low and mid-level officials takes place because their superiors in the higher echelons of governments are handsomely paid off by the criminal syndicates.

Moreover, it is difficult to believe that the Afghan government in Kabul and the U.S. authorities, with their experience and extensive intelligence networks in the country, have not been well aware of the emergence of lapis lazuli as, to use Global Witness’s term, a “conflict mineral.”

But, the illicit trade continues and the Taliban secures income that helps it to maintain its attacks on the Afghan people.

As the organized crime networks expand and capture politicians and public officials with their bribes, so we face the prospect of an increasing number of failed states – havens for terrorists and inevitable threats to our own security.

Ties between organized crime networks and grand corruption are a growing security threat.

Unlike the FBI, most African governments lack the resources to take on organized crime.

US anti-organized crime efforts must be coupled with diplomacy to bring on board Russia, China, etc.

Ties between organized crime networks and grand corruption are a growing security threat.

Unlike the FBI, most African governments lack the resources to take on organized crime.

US anti-organized crime efforts must be coupled with diplomacy to bring on board Russia, China, etc.