A Judicial Coup in Thailand? 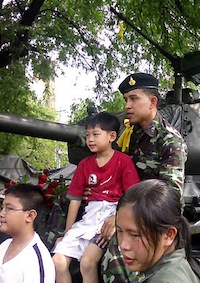 Military coup supporters with a soldier during the 2006 coup. (via Wikimedia) 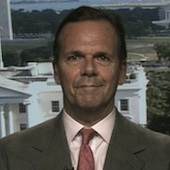 The government of Yingluck Shinawatra may well be deposed by means of court action, rather than by a military coup.

Yingluck’s government is a front used by her corrupt brother, former PM Thaksin, to rule the country.

The middle class faction, known as the Yellow Shirts, is supported by the royal family and by Thailand’s elite. It favors replacing the Thaksin/Yingluck government, with a caretaker administration to oversee new elections.

After more than five years in power, Thaksin was removed by a military coup in September 2006 on charges of abuse of power and corruption. He has lived in self-imposed exile, after fleeing the country in 2008 to avoid a jail sentence.

It was Yingluck’s Puea Thai Party’s effort to push an amnesty bill through the Parliament last fall that would have pardoned Thaksin, which caused the Yellow Shirts to rise up in protest.

At the heart of this political conflict is a debate over the nature of Thailand’s democratic system. Both Thaksin and Yingluck took advantage of the system to effectively buy the votes of Thailand’s poor farmers in the north of the country, who make up a majority of the country’s voters.

Yingluck’s Puea Thai party won the 2011 election by a landslide by promising unprecedented largesse to its supporters. It was her promise to buy farmers’ rice far above the world price that cemented her party’s win.

However, as a result, Thailand’s warehouses are now full of very expensive rice. The country has also seen its current account balance decline drastically, and it lost its spot as the world’s top rice exporter.

Yingluck dissolved her government last fall and called for new elections held February 2nd. However, protests blocked votes from being cast in 14 provinces, making it impossible to get a quorum needed to seat a new Parliament.

Elections were held in five provinces last weekend without incident, but no date has been set for elections in the remaining nine provinces that must still be held.

The end of largesse?

Ever since Yingluck dissolved her government, she has had little access to government funds to pay farmers for the rice crop they harvested last October. As a result, Thailand’s farmers are going broke, and the state in is dire financial straits.

The four-month long protests, led by former Deputy PM and Democrat Party leader Suthep, have failed to cause Yingluck’s downfall, even though they have clogged the streets of Bangkok for over a month. Suthep’s hopes that the military would intervene have been in vain.

The powers that be (= the King) decided that a military coup would be too harmful to the country’s economy and its international image. Since the Thai military has always abided by the King’s orders, no coup has occurred.

Give all that, the opposition is now counting on judicial intervention. An anti-corruption body and/or the courts, widely seen as hostile to Yingluck’s government, may bring her down.

Recently, Yingluck retreated to her stronghold in the north of the country, after the National Anti-Corruption Commission (NACC) gave her until March 14th, to defend herself against charges that corruption was involved in the rice buying scheme. She is also charged with mismanaging the scheme and with negligence.

After the NACC hears her defense, it will then decide if the case is worth pursuing. If a trial is held (a certainty), most observers consider it likely Yingluck will be found guilty of negligence and mismanagement, if not corruption in the rice deal.

Meanwhile, the Red Shirts have mobilized in Nakhon Ratchsima northeast of Bangkok. Their leaders are threatening to march to Bangkok if Yingluck is indeed removed from office by the NACC, the courts or for any reason. They view the action by the NACC and the courts to be the work of the Bangkok elite to bring Yingluck down.

There is a bit of Ukraine to be seen in all of this. Some of Yingluck’s supporters are calling for Thailand to be divided along north-south political lines.

However, Yingluck told the press, “The government does not support this idea and it is against the law so I don’t think this will happen.”

The mobilization of the Red Shirts and the calls for a split of Thailand is very worrying, but the military will likely prevent a Red Shirt march to capital. A division of the country is out of the question, because the King will not allow this to happen.

Thailand is at a political impasse and its once resilient economy is suffering. Foreign investors are reluctant to put their money to work in the country, with good reason, until the crisis is resolved.

It is clear the Thaksin/Yingluck Puea Thai party would win any fair election, because its promise of largesse to the poor will see the majority voting for their own personal best interest (which, given past evidence, is not in the best interest of the country).

Yingluck will likely be deposed as a result of a judicial coup. It is likely that she will be found guilty of corruption, neglect and mismanagement in the rice-buying scheme.

The Army will act to prevent a repeat of the violence, but it will not be used as the instrument to overthrow Yingluck; that will be left up to the NACC and the courts. This will allow the Army to act to restore order, and it will not face international condemnation for doing so.

The middle class and the elite, supported by the royal family, is determined not allow a corrupt Thaksin-led government to gain power in the future. Therefore, Thailand’s future government could follow a model along the lines of Singapore’s.

There the people can vote for their representatives, but civil servants appointed by its elite hold the power of the purse. Singapore has thrived under its managed democracy, as may Thailand’s should it adopt a similar political system going forward.

Some of Yingluck's supporters are calling for Thailand to be divided along north-south political lines.

A division of Thailand is out of the question, because the King will not allow this to happen.

Thailand's future government could follow a model along the lines of Singapore's.

At the heart of Thailand's political conflict is a debate over the nature of its democratic system.

Some of Yingluck's supporters are calling for Thailand to be divided along north-south political lines.

A division of Thailand is out of the question, because the King will not allow this to happen.

Thailand's future government could follow a model along the lines of Singapore's.

At the heart of Thailand's political conflict is a debate over the nature of its democratic system.