Why Germany should show more generosity toward eurozone countries in crisis. 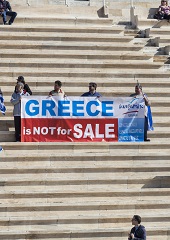 Protest against austerity in Athens, Greece, in 2012. (Credit: Anastasios71 - Shutterstock.com 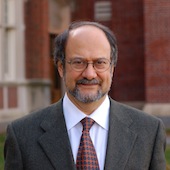 Robert Kuttner is the co-founder and co-editor of The American Prospect.

German insistence on Greek austerity has now pushed Greece to the brink of a social catastrophe. But the Germans might take a moment to reflect on their own history.

The Hitler government ran up the largest debt-to-GDP ratio in the history of the world — about 670%. But in the aftermath of World War II, the Allies, remembering the disastrous consequences of German reparations after the First World War, did not insist on their pound of flesh. Rather, the entire Nazi public debt was written off.

The preexisting unpaid debt from the Weimar period was written down to about one-tenth of its original cost. In addition, claims on old debt were strictly segregated from German reconstruction funds. The new German Federal Republic was given very easy repayment terms. It finally paid off the last bit only in 2010.

Germany had surely lived well beyond its means during the Nazi era, plundering the rest of Europe in order to do so. The allies would have been well within their rights to demand that Germany pay for its sins by reducing its consumption. The U.S. Treasury Secretary, Henry Morgenthau, was promoting just such a plan, to “pastoralize” Germany and cut its living standards.

But back then, wiser heads prevailed. The Americans not only agreed to write off old debts, but gave the Germans billions of dollars in aid under the Marshall Plan.

This farsighted policy reflected a careful study of history. The reality is that the Allies in 1948 were concerned with Soviet expansionism and needed a recovered Germany as an ally.

The result was that, in 1952, the German Federal Republic enjoyed a public debt ratio of under 15%. Most remarkably, that was far less than that of any of the Allies that had gone deeply into debt to defeat the Nazis.

While the famous market reforms of Ludwig Erhard and Konrad Adenauer get the credit for the German economic miracle in the usual histories, the largely forgotten Allied write-off of German debt played a major role, too.

It is also worth remembering that the German Federal Republic itself, after 1989, did not condemn the former East Germany to austerity as a remedy for its fictitious economy.

Instead, Chancellor Helmut Kohl allowed the “Ossies” to exchange their nearly worthless ostmarks for deutschmarks at the inflated rate of one to one. He also poured the equivalent of more than a trillion euros into the reconstruction of the Eastern economy.

If the Allies of 1948, and the government of Germany itself in 1989, had practiced what the Germans are now preaching and imposing on Greece, Germany today would be a much poorer country.

One recalls Edmund Burke’s sage 1775 oration addressed to King George III on the perversity of the British government’s harsh policy towards its restive North American colonies. Burke averred, “The question with me is not whether you have a right to render your people miserable, but whether it is not your interest to make them happy.”

Germany gains little and stands to lose much by condemning the Greeks to misery as punishment for past profligacy. What, then, to do?

It is true that Greece had been living on borrowed prosperity, and that it has a structural trade deficit. Greece simply does not have enough attractively priced exports to finance what it buys from the rest of the world.

Normally, a country with chronic trade deficits that has lost the confidence of its foreign lenders would devalue, disguising the decline in living standards and at the same time making its exports more competitive.

But Greece’s membership in the eurozone precludes that strategy. It is also true that Greek public administration and tax collection are a mess.

But none of this makes severe austerity a sensible policy, since austerity only weakens the Greek economy further, causing human suffering without restoring budget balance. The Germans are playing with fire. Greece is a nation that had a military dictatorship as recently as the 1974.

So how to emulate the spirit of the Allies’ macroeconomic mercy towards the Germans after 1948 and West Germany’s farsighted generosity toward their Ossie cousins after 1989?

Why not couple Greek budget and tax reform with a large infusion of funds for public works and economic modernization in the spirit of the Marshall Plan?

Young Greeks, instead of looking at ruinous unemployment, could gain productive jobs. The entire Greek economy would gain a big macroeconomic boost and a path to modernization.

Most importantly, the EU and its German leaders would gain the moral authority to work with Greeks on politically awkward reforms. It’s one thing to grudgingly tolerate technocrats who are bleeding you dry in order to satisfy bankers, but quite another to work with development specialists who come to Greece bearing gifts.

Call it the “Merkel Plan,” so that Chancellor Angela Merkel might be remembered not as the jackbooted German who destroyed Greece but as the wise leader who tempered austerity with sensible mercy.

Editor’s note: This essay is adapted from Debtors’ Prison: The Politics of Austerity Versus Possibility by Robert Kuttner (Knopf, 2013). Published by arrangement with the author. Copyright © 2013 by Robert Kuttner.

Germany today would be much poorer had the Allies of 1948 practiced what Germany now imposes on Greece.

Thanks to debt relief, Germany had a public debt ratio under 15% by 1952, far less than the occupying Allies.

Why not couple Greek budget/tax reform with a large infusion of funds for public works and economic modernization?

Call it the "Merkel Plan," that she might be remembered as the wise leader who tempered austerity with sensible mercy.

After 1989, West Germany did not condemn East Germany to austerity as a remedy for its fictitious economy.

Robert Kuttner is the co-founder and co-editor of The American Prospect.

Germany today would be much poorer had the Allies of 1948 practiced what Germany now imposes on Greece.

Thanks to debt relief, Germany had a public debt ratio under 15% by 1952, far less than the occupying Allies.

Why not couple Greek budget/tax reform with a large infusion of funds for public works and economic modernization?

Call it the "Merkel Plan," that she might be remembered as the wise leader who tempered austerity with sensible mercy.

After 1989, West Germany did not condemn East Germany to austerity as a remedy for its fictitious economy.

German Elections: A Primer on Political Powersharing Since 1949