Does Germany’s Chancellor really not understand the cynical ways in which Turkey’s President plays her? Is it naiveté – or appeasement?

German Chancellor Angela Merkel has been trying to accommodate Mr. Erdogan any which way she can. Supposedly, this is because she is deadly afraid that he will open the floodgates of Syrian refugees and send them to Europe.

The trouble for the German Chancellor is that the more she tries to mollify Turkey’s strongman, the more she gives off the air of being an ill-guided appeaser, à la Neville Chamberlain.

The Six Fundamental Errors (jump down to:)

1. Davutoglu isn’t Erdogan
2. Erdogan toys with the West
3. Erdogan = Mr. Anti-trust
4. Clueless on politics of symbolism
5. Proportionality and appeasement
6. Getting played by an utter cynic

The list of her errors is long. It begins with the fact that she relied greatly on her relationship with Turkey’s now unceremoniously deposed Prime Minister Davutoglu.

That Angela Merkel established an easy rapport with him is easy to explain. The Turkish professor-turned-prime minister must have reminded her mightily of her own professor husband, Joachim Sauer. Negotiating the refugee deal with Ahmet Davutoglu must have been like having a dinner table conversation in her own home.

Comforting as that must have been, her fundamental miscalculation was that Merkel believes that the idea of rationality would also apply to Turkey’s President.

What the German Chancellor neglected to see is that Mr. Erdogan is guided by an entirely different set of incentives. He generally regards the concept of rationality – just as that of democracy – as nothing other than nefarious Western schemes to keep the East (or the Muslim world) down.

Error 2: Erdogan toys with the West

Erdogan does make one important exception, however. He loves referring to principles of democracy and the rule of law as they may bind others – but never ever himself. His favorite moment arrives when he can hoist the West by its own petard.

The latest such incident was when he cried foul about the German government not letting him speak by video to demonstrators in Germany.

This from the very same man who wants to make sure there are no buildings of other religions left in his country that aren’t closed down – or turned into a mosque. Quite a liberal, rule-of-law kind of guy.

References to democracy and the rule of law, noble sounding though they may be, are strictly tactical devices that Erdogan deploys only to the very limited extent that they immediately serve his own temporary political needs.

But if the West were to dare to apply them to his country, it will immediately be criticized as interference in domestic affairs.

Erdogan’s overriding goal is to ensure that neo-Ottoman Turkey gets to re-usurp its rightful place in the modern world order. He is guided by a strong sense of seeking to rectify what he considers a profound historic injustice.

In that regard, Erdogan is like a twin brother to the diminutive Mr. Putin, who very much feels the same way about Russia. (That the two men literally got into each other’s cross hairs was no accident. The Southeastern corner of Europe may prove too small for the two men’s gargantuan appetites for power.)

When Erdogan looks at the West, he sees a lot of maneuvering space for himself. In his view, he simply needs to steadily execute a lot of shifty moves.

Erdogan’s moves — sometimes charming, at other times threatening — are all designed to systematically and ruthlessly exploit the West’s weaknesses. And no weakness offers up more exploitation potential than the Western instinct to trust the other side.

To Erdogan, the goodwill that is readily, but naively shown to him is a fool’s errand. He just loves the West’s credulity. And he enjoys few things better more than to teach trusting Mrs. Merkel a lesson. The fact that she is a woman makes it all the more enjoyable for him to put her in her place.

Beyond just Merkel, that culture clash is no surprise: Western institutional frameworks are generally built on trust. Alas, in other parts of the world, the principal building block is control, which may well include ruthlessness and exploitation.

Error 4: Clueless on politics of symbolism

No one can say that Mr. Erdogan did not send plenty of wake-up calls in Mrs. Merkel’s direction. None was bigger than October 19, 2015, the day when he put her on a veritable throne right next to him.

That shameful moment happened in the new Yildiz presidential palace in Ankara, a building that rather conforms to Richard Wagner’s and Ludwig II.’s bombastic tastes. On visual matters, both are Mr. Erdogan’s soulmates.

That Angela Merkel ever sat down next to Erdogan on that throne-like chair is a moment that she will never live down. 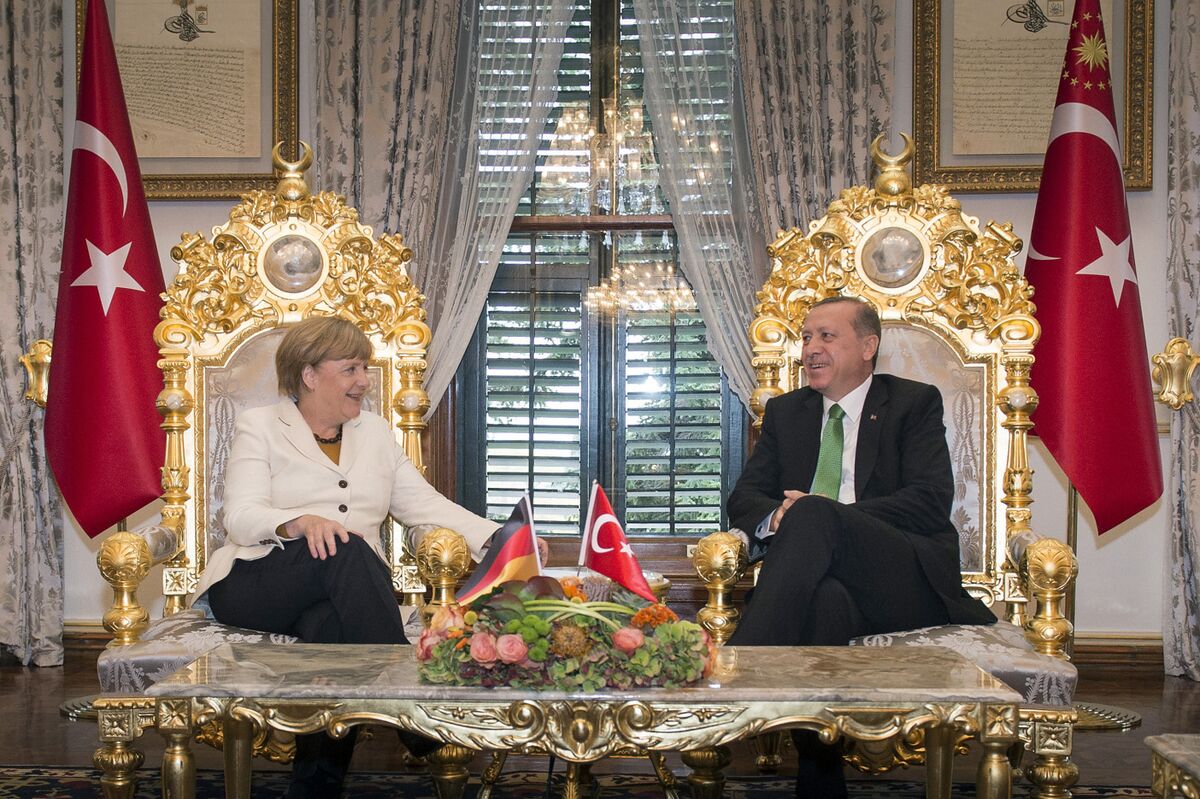 One has to wonder whether she has any advance staff members that understand the unforgiving politics of symbolism. It was a moment of distinct tastelessness.

Mr. Erdogan, however, achieved his purpose. By cynically seating her next to him, in a 19th century political frame of royals, he robbed her of the basic decency of democratic leaders. In one fell swoop, he made her complicit in his effort for quasi-regal rule.

To avoid staining her career with a moment of eternal shame, Merkel must sincerely hope that Mr. Erdogan won’t turn out to be as anti-democratic and one-man-rule obsessed as he currently appears to be.

It surely wasn’t a sign of any progress in her degree of understanding that Angela Merkel recently expressed the view that the Turkish President’s plan to remove any and all checks and balances lacked a degree of “proportionality.”

One can only hope that this – what is the most charitable way of putting it: tasteless? — phrase represents the height of self-immolation on Merkel’s part.

Otherwise, it becomes a matter of national shame, especially in a nation that knows so much about how semi-democratic mechanisms are systematically perverted to turn into dictatorial rule.

Nobody can misunderstand that, by liberally claiming everybody he goes after is a “Gülenist,” Erdogan is literally trying to root out any independent, never mind critical thinking in his country.

That effort goes way beyond the Gülen web. He essentially seeks to paralyze every person in Turkey with an independent brain.

Error 6: Getting played by an utter cynic

Merkel ought to know by now that Erdogan’s understanding of democracy is utterly cynical. He uses it in a purely majoritarian sense. His current effort to shred any remaining fragments of checks and balances in Turkey reveals himself as Leninist in character.

In hindsight, the fact that Mr. Erdogan ever got to campaign in Germany in May 2014 during Turkey’s parliamentary elections is the height of appeasement.

From Erdogan’s own perspective, it goes without saying that he gets to campaign in Germany. He sees all of the three million people of Turkish origin who live in Germany as his “sheep.”

And, of course, the father of the Turkish nation must have unfettered campaign access to Germany, given that it has the world’s largest Turkish diaspora.

Given that about half of those three million are eligible to vote in Turkish elections, it is self-evident why Mr. Erdogan is so keen to campaign. What is incomprehensible is why the German government has been so accommodationist.

As for Erdogan, his ambition is clear. In the latest national elections in Turkey, 60% of eligible Turks living in Germany voted the AKP party.

While that is a bigger share than in Turkey, it isn’t yet close to 100%. Never underestimate just how ambitious a man Erdogan is – and how relentlessly taken with his own magic.

Erdogan’s primary tool to insert himself into the middle of the German political debate is the Union of European-Turkish Democrats (UETD).

The name of this organization is positively Orwellian. It aims not for democracy, but for the removal of the last restraints standing in the way of the great leader.

With all of the above in clear evidence, one wonders whether Mrs. Merkel is still receiving any of the shockingly clear signals – or whether she has by now dug in completely and resigned herself to being Erdogan’s all too willing sidekick and “understander-in-chief.”

This then is the ultimate paradox: She sees rather clearly what Putin is up to. She is decidedly not a Russia “understander.” One wonders why she is such an Erdogan “understander.”

The refugee issue does not at all suffice as an explanation. After all, what good does it do for any self-respecting democrat to respect the rights of refugees, but let Mr. Erdogan trample individuals’ rights in Turkey? Her silence on that account is indicative of a very troubling double standard in the German Chancellor’s mind.

Director of the Global Ideas Center, a global network of authors and analysts, and Editor-in-Chief of The Globalist.

Get The Globalist's latest headlines in your email inbox three times a week.

Deciphering Putin’s Russia: Why the Strains with the West?