Ngozi Okonjo-Iweala: Nigeria’s “Yes We Can” Minister – A 2013 Portrait

An interview with Nigeria’s Ngozi Okonjo-Iweala on her country’s future path. 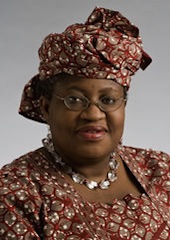 Ngozi Okonjo-Iweala — or Ngozi, as many call her informally, in part due to her very multi-syllabic name — is clearly a woman on a mission.

Serving as Nigeria’s Coordinating Minister for the Economy, she is also a realist. Ngozi knows that on a range of critical issues, the stakes are very high for herself and her fellow reformers in Nigeria.

As she explained in our interview, from continuing corruption to explosive population growth, much can go wrong with her country’s future. But the 59-year old minister is clearly guided by a strong sense of being present at the creation of a new Nigeria.

Africa’s most populous nation faces big challenges, none bigger than youth unemployment, which is at levels close to the Spanish and Greek numbers.

How to create employment for the young?

But unlike in those two countries, in Nigeria, staggeringly large numbers of new labor market entrants will need to find jobs. Nigeria may become the world’s third-largest country in terms of population by the end of the 21st century.

To deal with that enormous challenge, her government has initiated a multitude of initiatives, from promoting youth skills to entrepreneurship. It should help that more of Nigeria’s oil money is swept into the government’s coffers.

The reason is simple. The oil wealth that Nigeria has must be used well. The country has large investment needs, not just in infrastructure, but also in education and the economy.

Oil as a tool to another future

At a time when many in the West tend to pooh-pooh the virtues of prudent macroeconomic management, Ngozi (almost) comes across as a fan of the Washington Consensus. And why not? Africa, long considered the world’s “sick man,” may be finding its way, says the minister, even independently of the recent boom in commodities.

A key part of the equation, she argues, is that, in many African countries, a healthy crop of technically competent and politically adept policymakers has taken the reins over the economic and financial sector across the continent.

Nigeria’s President Goodluck Jonathan surprised his countrymen when he removed all fuel subsidies on January 1, 2012. Although a large oil producer, Nigeria imports some 85% of its gasoline due to its own frail refineries. The subsidies were thus a huge strain on the country’s budget.

As in many other countries, such as Indonesia, strikes and demonstrations followed. But while reformers in such countries caved in, Jonathan compromised. He reinstated some subsidies, but continues to be committed to their complete removal.

In order to get ahead on the long to-do list, Ngozi is more than aware that this is a time when her country and others in Africa must put the pedal to the metal as regards economic growth. “Let’s not become complacent,” she says.

Nigeria’s 6% GDP growth range seems remarkable in international comparison. However, when rapid population growth is factored in, it is not at all that impressive. Making real headway in positioning the country for a prosperous future would require Chinese-sized growth rates in the low double-digit figures, Ngozi says.

Her government is also relying more on the market and the private sector to help deal with some of the most vexing challenges for Nigeria, such as providing its energy sector with more capacity.

For all the progress, big issues remain. According to international statistics, Nigeria is the world leader in having the largest number of school-age children that are not attending any school.

Nigeria accounts for 10 of the 53 million such children globally, although the minister has data-related doubts about whether that dubious honor and the overall number reflect reality.

Education holds the key to the future

Even so, there is no doubt on her mind that education is the key to Nigeria’s future. Education also plays the key role in reducing the fertility rate. There is no better path to managing future population growth than keeping girls in school.

While Nigeria benefits handsomely from being well endowed with oil riches, the sector is coming under new forms of pressure.

Corruption has long been a big problem in the oil sector, but now oil production is also declining. Increased domestic consumption may even endanger the country’s ability to export much oil in the future. That would seriously dent export earnings and the national budget.

That is not a prospect any finance minister could welcome. At the same time, Ngozi is fully aware that relying on oil revenues is a big fallacy. While it can provide crucial resources, “oil doesn’t really create any jobs.” It is mostly a capital-intensive industry and, given recent trends in the industry, bound to become ever more so.

A century in the making

Despite the deep-seated economic and political problems in the country’s north — especially related to Boko Haram, which has just been listed as a terrorist group by the United States — Nigeria’s reformist government is trying to preserve its momentum. A key to success will be whether the country’s middle class keeps growing.

Income inequality continues to be a challenge, even though Ngozi is quick to highlight that, on this key issue of moving gradually toward democratic equity, her country is performing better than Brazil and South Africa.

As economy and finance minister, she cautions against the simplistic enthusiasm of Western firms entering the Nigerian market. Many of them have a habit of just extrapolating population growth into (assumed) revenue growth and profits.

It seems as if she perceives a certain amount of Western naiveté in this regard, a kind of replay of the once sky-high hopes Westerners had for penetrating the Chinese market.

All in all, talking with Nigeria’s economy and finance minister gives one a distinct feeling of a person driven by a very clear-eyed can-do spirit. Where others would just throw up their hands in view of the tremendous challenges, she is keen to persevere.

“If I hadn’t felt that this was really the time to bring fundamental change to my home country, I wouldn’t have taken the job when our president asked me to join his team.”

Nigeria's Ngozi Okonjo-Iweala is clearly a woman on a mission.

"If I hadn't felt this was the time to bring fundamental change to my country, I wouldn't have taken the job.”

Relying on oil revenues is a fallacy. While it can provide resources, "oil doesn't really create any jobs."

Nigeria's Ngozi Okonjo-Iweala is clearly a woman on a mission.

"If I hadn't felt this was the time to bring fundamental change to my country, I wouldn't have taken the job.”

Relying on oil revenues is a fallacy. While it can provide resources, "oil doesn't really create any jobs."

Brazil: An Object of History — or a Subject?