Optimism as a Force for Good — And Doing Nothing

Can optimism be a substitute for doing really hard work? Or is it just a very transparent excuse for a cop-out on climate change? 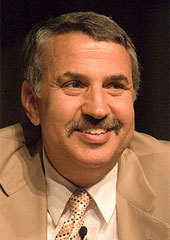 No organization in the United States advances the self-defeatist argument — that the country can do very little to combat climate change — more forcefully than the U.S. Chamber of Commerce. It believes that no U.S. business can afford the imposition of any further costs and burdens in the current recessionary environment.

Of course, the same powerful organization is also the first to make the point that, whenever the U.S. economy booms once again, then will also not be the time to focus on the environment.

Doing so, after all, would kill the strong U.S. growth machine and condemn the U.S. economy in the future to the lame growth path of those environment-minded Europeans.

The Europeans, it is further (and bizarrely) argued in such prominent places as the opinion pages of the Wall Street Journal, are only pursuing the environment agenda so hard for a very particular reason. They want to find ways to drag down the United States and stunt the impressive growth mechanism that underpins the U.S. economic model — and which they themselves will forever lack.

But the bizarreness does not end there. Just about when it seems as if the anti-climate change scenario drawn up by Washington’s acerbic political game is turning too somber, the requisite pound of optimism is introduced — and takes the form of a magic bullet.

Doesn’t technology show the way out? And so it is said to do. Call it the strategy of solving climate change by “virtue” of the fossil fuel industry-sponsored TV commercial.

Take the steady stream of television commercials about clean coal. The alluring suggestion, presented to Americans faced with harrowing rate increases on such routine items as health insurance, is that a 30-second commercial can solve all the nation’s vexing problems.

All it takes is a beautifully shot commercial, narrated alternatively with a sonorous male voice of authority or the empathetic voice of a motherly woman. These propositions are earnestly made, providing ample reason to wonder about the advertising-induced credulousness of the American media-fed mind.

The solution to climate change — whether via clean coal, carbon capture and storage (CCS), shale gas or what have you — must surely just be around the corner, maybe a few months away before it becomes reality. Didn’t they say so on TV recently?

Optimism has always been second nature to Americans. That is a welcome trait. But it is a different matter entirely if that trait morphs into a fateful combination of blind optimism and the abdication of civic responsibility, yielding ever more surreal solutions (such as geoengineering).

Not to be deterred, it is not just conservatives who have this great belief in technology as a panacea. So does Silicon Valley, the “it” boys (yes, almost exclusively boys) of invention and innovation.

They, too, are convinced that, if and when they put their minds to the problem, they will come up with the technological breakthroughs just in time to avoid painful tradeoffs for society. That’s the luck the risk takers deserve.

While that certainly sounds attractive, in the arena of public policymaking this proposition adds up to something that every American is intimately familiar with: the proverbial Hail Mary pass.

For the uninitiated, a Hail Mary is a play in American football when the quarterback throws an incredibly long pass down the field late in a game. He does so against long odds — in the unlikely hope that the pass is caught for a touchdown and evens the score or wins the game.

If that sounds to you like a desperation move, you can be forgiven — because it is. The high priest of having the entire nation worship that narrative is Tom Friedman — the New York Times columnist who has made a remarkable career out of serving up a coquettish brand of elite American optimism.

He has long argued that it is high time for Americans to become more green-minded (as in environmental) — while he himself lives in a 11,400-square foot (1,000-square meter) residence. (And that is just his primary residence.)

His often-fervent appeal that Americans develop a stronger sense of societal responsibility evidently stops right at Friedman’s own front door, at least when it comes to keeping a small environmental footprint.

But not to worry. According to the other brilliant part of the Friedman logic, pertaining to collective action instead of individual action, we are in good hands. All it takes is American leadership.

In particular, once U.S. business and technologists turns their minds to something, they will lead the world. That is so by definition (or prophecy).

A very soothing scenario indeed. The suggestion that U.S. businesses will come along as a savior certainly has a mystical quality about it. Its real-life effect, though, could be just to put off dealing soberly with less-soothing realities yet one more time.

There is no evidence yet that this hyped optimism is really anything more than a crass marketing ploy. Innovation might be the mantra of think tanks like the Information Technology & Innovation Foundation, but innovation is what is driving the shift to coal seam gas and oil — through the innovation of fracking.

In the ultimate analysis, there is a strong danger that the Silicon Valley/Tom Friedman/Wall Street Journal axis of worshipping U.S. technological leadership is turning into a dangerous echo chamber.

The United States as an Anti-Modernity Force is a five-part series by Stephan Richter on the United States’ inability to play a leading role in the global debate on climate change:

1. Climate Change and the Claim to Global Leadership
2. Optimism as a Force for Good — And Doing Nothing
3. The U.S. Refusal to See China as a Positive Challenge
4. Yearning for Systemic Uncertainty
5. Turning Environmental Threats into Profits

Pretending the solution to the climate crisis will be found as if by immaculate conception serves the political needs of both political parties.

Democrats like to get on their high-tech high horse, while Republicans are ready to bask in the glory of private sector solutions.

The United States, for domestic political reasons, is no longer the global force for environmental good, progress and enlightenment.

Pretending the solution to the climate crisis will be found as if by immaculate conception serves the political needs of both political parties.

Democrats like to get on their high-tech high horse, while Republicans are ready to bask in the glory of private sector solutions.

The United States, for domestic political reasons, is no longer the global force for environmental good, progress and enlightenment.

Climate Change and the Claim to Global Leadership