Pope Francis: A Martin Luther in the Making?

Is Jorge Bergoglio up to the task of reforming the Catholic Church without breaking it apart? Governance reforms are centuries overdue. 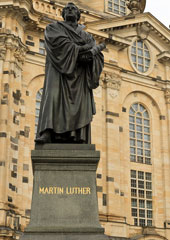 On the one hand, one should not overstretch the power of comparisons. On the other hand, comparisons can be the true elixir of human life — mind-blowing, even transcendent and providing very rare moments of true clairvoyance.

Transcending cultures, ideologies and beliefs is something that is always very important, but especially so in this global age.

Few comparisons one could draw are potentially more incendiary than arguing that with the arrival of Pope Francis I, the former Argentine Cardinal Jorge Bergoglio, the odds are that the Catholic Church may have found at long last its equivalent of the 16th-century German theologian and reformer Martin Luther.

Yes, Pope Francis may be nearly 500 years late in coming, but the task ahead of him with regard to the Curia in Rome is no less reformative than the one Martin Luther ultimately instigated.

In 1517, as a professor of theology at the University of Wittenberg, Luther protested to his bishop about the selling of indulgences. His “disputation” later became known as the famous 95 theses.

Most people remember only that Luther and his followers ended up splitting away from a church that was not interested in reforming itself. For the longest possible time, however, Luther’s objective was to work within the Church’s structures. His goal was to reform it from the inside, not to split it.

Only when the Church hierarchy proved utterly unbending in its unwillingness to address any of the legitimate grievances and distorting practices that Luther had exposed did he move away from his “inside” game. In fact, making that move wasn’t his choice.

Astonishingly, we are now almost 500 years past Luther’s famous 1521 trial at Worms. In 2013, Pope Francis is faced with a similarly backlogged agenda of an increasingly dysfunctional church that, just as in the early 16th century, has lost its way.

If anything, the Vatican is entirely self-obsessed, regaling in its pomp, glory and insidious insider games. The real and original purpose of the Church, serving the faithful, at best seems like a nuisance, a byproduct of being robed.

Now, it is not exactly the selling of indulgences that is at the root of the problem. Today’s Catholic Church, however, does have to confront related monetary problems, such as shady international financial practices. These have even gotten onto the radar of the U.S. Treasury Department, which is no softy on this kind of issue.

And claims of corruption inside the Curia — along with apparent mounds of sexual conflagration, not just of the pedophilia variety — point to a Church that has not just lost its bearings, but its moral compass.

Under those circumstances, one must regret the rather inefficient interlude of Pope Benedict XVI, the former German Cardinal Joseph Ratzinger. His nearly eight-year reign (from 2005 to 2013) did little to address to the Vatican’s real problems.

Pope Francis is doing what he can to reset the mission of the Catholic Church. With powerful images of his ablution of the feet of prisoners, Muslims and women in a detention center outside Rome, he is sending out a clear message of “back to the basics.”

The question is less the sincerity of his convictions or the depth of his will to change things. Rather, it is whether the other cardinals, often Italian, who are deeply entrenched inside the Vatican’s structures, will let him bring about real change.

One can only surmise about the battles that are now going on — the landmines and booby traps that are being set for any reformer, assuming that Francis is just that.

The potential tragedy for the Catholic Church is that the playing of vicious insider games is about as old as the Vatican itself. Much of the Church’s infrastructure and power structure used to be a toy of powerful Italian families fighting each other mercilessly, via their chosen sons deemed destined for the highest church service.

The Church was never the main point; it was just the occasion to do battle with each other. It is no accident, but a telling coincidence at least, that Italy, in its civilian sphere, is also having great difficulty forming a government at the current time.

Anyone who has watched the spectacle of the politicians in Rome trying to come up with a coalition government has been stunned by the degree of selfishness and hyper-partisanship that has manifested itself during these deliberations.

These political games echo what’s been played inside the Vatican for centuries. It’s all a grand stage, with lots of pomp and circumstance. And it’s about being merciless to each other — and forgetting the purpose of the larger entity, whether Italy as a nation or the community of the Catholic faithful as a whole.

Evidently, service is not the mission, according to many who are high up in the church. Self-aggrandizement and considerable recklessness are. Pope Francis is seeking to reverse this balance.

Given all that, one can only hope that he has the wherewithal, fortitude and courage to clean up his house. Five centuries after Martin Luther tried, and failed, to do that job on the inside, Luther’s mandate of fundamental reform still needs to be executed.

Only this time, it’s no longer about such abstract niceties as church doctrine and the core tenets of the faith. It’s about something much simpler — the belief in institutions and setting limits to a priesthood that has gotten off the rails, pretty much globally.

In 2013, Pope Francis is faced with a church that has a similarly backlogged agenda and that, just as in the early 16th century, has lost its way.

The real and original purpose of the church, serving the faithful, at best seems like a nuisance, a byproduct of being robed.

The spectacle of the politicians in Rome trying to come up with a coalition government echoes the zero-sum games that have been played inside the Vatican for centuries.

In 2013, Pope Francis is faced with a church that has a similarly backlogged agenda and that, just as in the early 16th century, has lost its way.

The real and original purpose of the church, serving the faithful, at best seems like a nuisance, a byproduct of being robed.

The spectacle of the politicians in Rome trying to come up with a coalition government echoes the zero-sum games that have been played inside the Vatican for centuries.