The Dividends of Middle East Peace 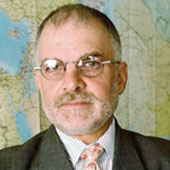 It is never too early to dream of peace. Imagine if billions upon billions of dollars currently being wasted on defense budgets in the countries of the region were invested instead in the advancement of social welfare, in encouraging businesses and stimulating the sciences.

And consider the leaps and bounds that could be made in research and development, in technology and medicine, if the best brains in the Middle East could work for the benefit of the people of the region — instead of looking for ways to emigrate to the United States and other greener pastures, as is currently the case for faculty members from universities at Ain Shams to Yarmouk, and from Beirut to Tel Aviv.

Imagine the rise in intellectual power if students in the Middle East could exchange ideas rather than insults, debate in lieu of hate, and put scholarly theses in place of explosive devices.

How would the level of education and understanding improve if scholars could lecture across the region without being prevented by man-made frontiers, both physical and mental?

These are just a few basic ideas in a sea of endless possibilities, where the only barriers are those erected by demagoguery and backward thinking.

Imagine the Middle East with a flourishing tourism trade — where visitors bringing hard currency by the bucketful arrive on pilgrimages to the Holy Land without fear of bombs exploding in roadside cafes.

And how about between Germany and Russia? Between the Austrian-Hungarians and their neighbors? How many armies waltzed across Poland, and how many times were the borders shifted, re-drawn and shifted back?

Look at Europe today. Twenty-seven nations speaking 23 different languages as diverse as French, Lithuanian, Hungarian and Maltese, practicing dozens of different religions, but united in the single largest economic market in the world.

War in Europe today is unimaginable because the EU has intertwined the economies of its member states in such a manner that it is simply unthinkable for any two members to resort to armed conflict any longer.

So imagine a similar political climate enveloping the Middle East, where tourists arrive by cruise liners to Beirut or Haifa, or by charter flights to Baghdad, Tehran or Ben Gurion. They would be free to roam throughout the region without worry of fundamentalist abduction, or of Israeli threats of annihilation.

Visualize how business — and as a result the standard of living — would benefit if people and merchandise could be driven from Lebanon to Israel, to Gaza and on to Egypt. Think of what the tourism industry could offer with its temperate climates most of the year.

When Europe is freezing in the dead of winter, depression and suicide rates climb to their highest point in northern Europe. When the sun is visible for just a few hours a day, if that, the beaches of Beirut, Tel Aviv and Gaza — only a couple of hours by plane from any European country — can be very enticing and affordable.

Imagine a vast industrial zone established in Gaza where labor is abundant, easy to train and inexpensive — and where European and U.S. car manufacturers can open assembly plants and textile mills to market their products in the Middle East and Africa and beyond.

Imagine Christian pilgrims looking to follow in the footsteps of the great prophets, traveling unhindered from Israel to Palestine to Jordan to Syria and to Lebanon. Imagine Muslim pilgrims doing the same from Mecca and Medina to Karbala, Jerusalem and Qom.

Imagine a Middle East without refugees. Where the camps of shame — now 61 years in existence, and where second- and now third-generation refugees are still squatting amid rancor and misery — no longer exist. Imagine those camps replaced by decent, modern and comfortable buildings with all the amenities of modern life.

Where the idle youth who were once only too happy to be offered an AK-47, a monthly stipend consisting of a few hundred dollars, along with unlimited prestige that accompanied the uniform of a “freedom fighter” — and nothing else, let alone hope for a better future — can now aspire to a better life for themselves and their families.

Give them a taste of what life should be like, then take a head count to see how many remain in line for suicide missions.

How do we get there? The day the antagonists in the Middle East will agree on peace is when the love they have for their children outgrows the hate they harbor for their enemies.

Editor’s Note: This feature is adapted from WHILE THE ARAB WORLD SLEPT by Claude Salhani, published by Xlibris Press. Copyright 2010 Claude Salhani. Reprinted with permission of the author.

Imagine the rise in intellectual power if students in the Middle East could exchange ideas rather than insults.

Imagine a Middle East where border disputes are a thing of the past.

Consider the leaps and bounds that could be made if the best brains in the Middle East could work for the benefit of the people of the region.

Imagine the rise in intellectual power if students in the Middle East could exchange ideas rather than insults.

Imagine a Middle East where border disputes are a thing of the past.

Consider the leaps and bounds that could be made if the best brains in the Middle East could work for the benefit of the people of the region.