The Globalist Debate: How To Compete with China in Renewables 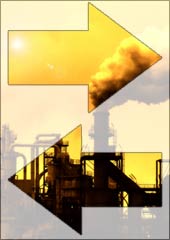 Washington think tanks are busily arguing that no one can stand up to Chinese mercantilist policies which promote standardized products at the expense of innovative new ventures competing in market niches.

But is China really the ogre that is destroying “the global energy innovation ecosystem”?

There would appear to be some prima facie support for such an argument when we look at U.S. and European companies that have been developing innovative new solar PV cells.

They have had to succumb to Chinese competitive pressures in the past year.

Solyndra in the United States had to declare bankruptcy. German Q-Cells had to sell off its CIGS subsidiary, Solibro (CIGS stands for Copper, Indium, Gallium, Selenide — alternative materials to silicon). Chinese power producer Hanergy snapped up the firm.

These are two cases where the firms were developing new CIGS “thin film” solar cells that would operate at slightly lower efficiencies, but much lower material costs, thereby promising decisive cost advantages.

There is no denying that the business promise of these kinds of solar cells was undermined by Chinese mass production of first-generation crystalline-silicon solar cells.

The Chinese indeed have driven the costs of the standardized products down so fast that the newer, lower-cost CIGS cells never had a chance to establish themselves in the marketplace.

It is being pursued not primarily for reasons to do with climate change, but as a national energy security policy, to allow China to build its energy system without impinging on other countries’ fossil fuel entitlements and thereby threatening war.

It is a smart strategy that suits China. So how then should other countries respond?

The U.S. government provides one way forward, by seeking to curb Chinese activities overseas and imposing trade sanctions (penalty tariffs) on Chinese-made imports of solar cells into the United States.

The E.U., for its part, is threatening even broader sanctions, not just on PV cells but on modules and whole systems as well. Such tariffs are designed to curb sales of China-made products abroad.

But either instrument is rather blunt — and already being circumvented by smart Chinese companies. They are building their manufacturing base in the United States and are globalizing their production activities and importing solar cells into the United States from non-mainland Chinese sources (e.g. Taiwan).

Moreover, the Chinese are perfectly able to impose the counter-tariffs on U.S. exports of high-value PV components and materials, including pure-grade silicon (where the United States currently runs a trade surplus with China).

These unanticipated consequences are likely to make the US trade sanctions relatively ineffective — while incurring severe displeasure from China, for which there will be a political price to pay.

The E.U. has also opted for a different competitive strategy.

The European market for solar PV systems was expanded through consumer subsidies, notably feed-in tariffs — in the expectation that German manufacturing industries would expand to supply the market.

As a market expansion strategy, this worked extremely well, allowing firms to benefit from cost reductions via the learning curve.

But, of course, it turned out that Chinese firms were the main beneficiaries — in the absence of specific German industrial policies designed to grow the market in Germany for German-owned and designed PV technologies.

Since Germany’s swing against nuclear power in 2011/12, there has in fact been a revival of German industrial policies designed to boost what is left of the solar PV cell manufacturing sector — with (so far) positive results.

China targets well-established and standardized technologies for rapid scaling-up and diffusion (such as first generation crystalline solar PV cells), and does so very effectively.

Other countries can place reasonable curbs on China’s imports (regulating that they remain below a certain threshold, in line with WTO stipulations), while actively supporting and building innovative alternatives to China’s standardized products.

It was open (and still is open) to the U.S., EU and Japanese governments to opt for policies to rapidly build the market for new, thin-film CIGS solar cells (through producer subsidies and government procurement, both allowable under WTO rules).

That would ensure that they achieve cost reductions that would keep them ahead of their first-generation crystalline silicon alternatives.

If the market for CIGS cells is grown fast enough, then CIGS technology will become the new dominant technology, with German, U.S. and Japanese firms already occupying a strong position, and able to tweak the technology to drive further improvements.

Of course, Chinese firms would then switch to this new, dominant CIGS technology, driving costs and prices down as they do so — and so weaker German, U.S. and Japanese firms would be driven from the market.

But stronger ones would maintain their position, particularly in supplying their domestic market, while they ramp up further innovative variations. And so the process will continue, from one technology generation to another.

Why don’t the US, German (EU) or Japanese governments pursue such an obvious counter to the Chinese competitive onslaught? In a word — because they are afraid of anything smacking of “industry policy.”

So powerful has the neoclassical objection to anything to do with promotion of some specific technology become (called ‘picking winners’) and promotion of market expansion through government procurement (called ‘market interference’) that policy makers are now afraid to propose anything along these lines.

The net effect of these ideological blinders is that they leave the field wide open to the Chinese.

This is the great-unanticipated consequence of the Western world’s turn to neoclassical ideologies — pushing privatization, deregulation, etc, and outlawing anything to do with industry policy. Why this was allowed to happen is another (and very interesting) story.

Think tanks like the Information Technology and Innovation Foundation valiantly struggle to portray ‘innovation’ as the only way forward, and provide support for trade sanctions — under the guise that Chinese policies are ‘mercantilist’ (and yet are no more so than those pursued by individual U.S. states like California).

What they should really be supporting is a full-blooded counter to Chinese targeted industry promotion, through counter-targeting of new, innovative technologies and deliberate and determined market expansion via instruments such as public procurement.

Then we would really see a flourishing of U.S. renewable energy industries.

This strategy is being pursued not primarily for reasons to do with climate change.

China is building an energy system that will avoid impinging on other countries' fossil fuel entitlements.

If Chinese firms switch to CIGS tech, it would drive costs & prices down and weaker firms would be driven from the market.

Stronger firms would maintain their position, while ramping up innovative variations. And so the process continues, from one tech generation to the next.

This strategy is being pursued not primarily for reasons to do with climate change.

China is building an energy system that will avoid impinging on other countries' fossil fuel entitlements.

If Chinese firms switch to CIGS tech, it would drive costs & prices down and weaker firms would be driven from the market.

Stronger firms would maintain their position, while ramping up innovative variations. And so the process continues, from one tech generation to the next.