The Homeless in Tokyo: An Understated Issue

Homeless people in Tokyo number more than the government wants to admit and sleep in the shadow of City Hall. 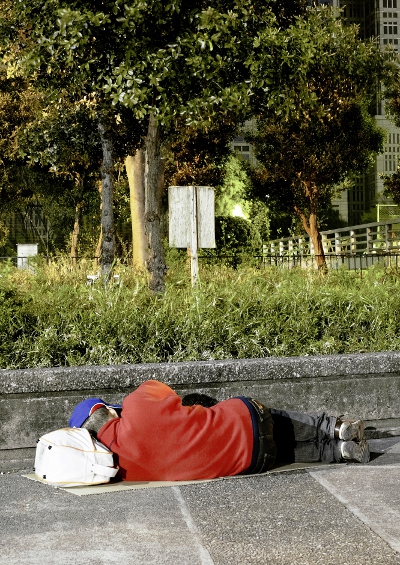 Credit: Samuel Zuder - The Other Hundred

Based in Hamburg, Germany, Samuel Zuder works on commission for international magazines, advertising agencies and other businesses. He also exhibits his own works focused on Asia that have made it into museums and Galleries all over the world.

At the heart of central Tokyo’s Shinjuku district stands the 235-meter-high Tokyo City Hall, one of the city’s most famous buildings, designed by star architect Kenzo Tange and home to the Tokyo metropolitan government. Every morning, as hundreds of suited officials enter its doors, another local community sets off on its daily commute.

From Shinjuku Central Park, literally in the shadow of City Hall, a community of homeless people dismantle their shelters made of blue plastic sheeting and cardboard, pack them and their other belongings into trolleys and head off to their work – collecting plastic bottles from around the district.

Every evening, after a hard day’s work, these communities pass each other again. As the homeless return to put up their temporary shelters for the night, the formally dressed bureaucrats hurry through the park to Shinjuku station and the trains that will take them back to their homes and families in the Tokyo suburbs.

In the mid-1990s, the city government tried to banish the homeless from the district. Their efforts failed as it proved impossible to stop people returning each night to sleep wherever they could find a spot to lie down. Officials have been more tolerant since, accepting that while office workers can relax and eat their lunch in the park during the day, at night it belongs to those with no homes.

Text and photographs by Samuel Zuder

Enlarge   Beside the main street outside Shinjuku Central Park, a man sleeps, oblivious to traffic and the all-night glare of street lighting.

Enlarge   A man sleeping on the steps.

Enlarge   A woman learning english by watching sesam-street on her portable T.V. phone.

Enlarge   Yamamoto-san has lived for more than 4 years in his box at the main entrance of the park.

Based in Hamburg, Germany Samuel Zuder works on commission for international magazines, advertising agencies and other businesses. He also exhibits his own works focused on Asia, that have made it into museums and Galleries all over the world.

Though #Japan tries to hide its homeless people, many sleep right in the shadows of Tokyo's City Hall.

Though #Japan tries to hide its homeless people, many sleep right in the shadows of Tokyo's City Hall.