Which country imported the most arms in recent years — Saudi Arabia, China, UAE or India? 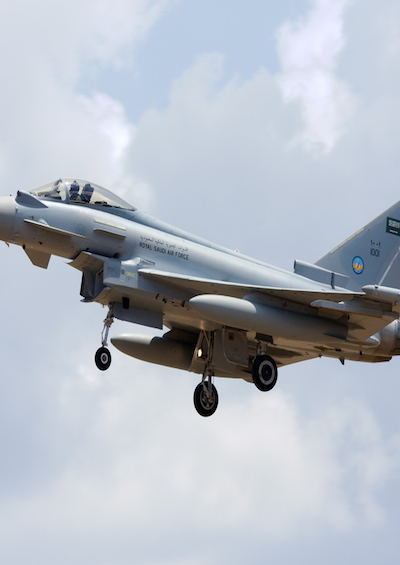 In 2014, wars raged in Syria, Gaza, Libya, Iraq, Ukraine, Afghanistan, Nigeria, Somalia, Egypt, Yemen, Central African Republic and Congo. Many other countries are eager importers of arms every year. We wonder: Which country imported the most arms in recent years?

A. Saudi Arabia is not correct.

In this decade, Saudi Arabia has risen to become the world’s second-largest arms importer in the world, according to the Stockholm International Peace Research Institute (SIPRI).

The country accounted for 5% of global deliveries of conventional weaponry in the 2010-2014 time period.

It is likely that the Arab Spring and the wars among Saudi Arabia’s neighbors spurred the government to increase arms purchases significantly. In the past five years, unrest and war have gripped Bahrain, Yemen, Iraq, Syria and the Sinai – all next to or very close to Saudi Arabia.

Saudi Arabia has provided arms to some of the players in these conflicts, while directly intervening militarily in three of them.

Moreover, Saudi Arabia has been increasingly unsettled by its perception that rival Iran is gaining military and strategic supremacy in the region, particularly in southern Iraq, which shares a border with Saudi Arabia. And most recently, the civil war in neighboring Yemen has drawn Saudi Arabia in directly.

B. China is not correct.

In the past five years, China has been the third-largest importer of arms in the world. Coincidentally, the country also became the world’s third-largest arms exporter, increasing its deliveries by close to 150% over the previous five years.

China is the only country to appear on both top-five lists of arms importers and arms exporters, according to the data compiled by SIPRI. China has emerged as a major supplier of sophisticated weapons systems, warships and aircraft – particularly for second- and third-tier military powers.

The cumulative volume of worldwide annual arms transfers between countries peaked in the early 1980s, during the last gasp of the Cold War. It then gradually receded to the levels previously seen in the early 1960s until about 2004. Since then, the trend has reversed and arms deals have risen steadily.

The United Arab Emirates, a smaller oil-producing neighbor of Saudi Arabia, remained the fourth-largest purchaser of major arms in the world during the 2010-2014 period, according to SIPRI.

Since 2011, the UAE has participated in military actions by air or ground in Bahrain, Egypt, Syria and Yemen.

In 2014, the country’s new regent, Mohamed bin Zayed Al Nahyan, made a clear priority of projecting Emirati power in the region and positioning it as a strategic peer of Saudi Arabia. The UAE was the United States’ second-largest buyer in the past five years, making up more than 8% of the volume of U.S. deliveries.

This trend was consistent with the wider pattern in the Cooperation Council for the Arab States of the Gulf, which bought most of the Middle East’s arms purchases in the past five years.

This group of countries imported most of their major arms – particularly aircraft – from the United States and Europe. They have been deploying these systems in operations against Islamic State militants as well as the Saudi-led intervention in Yemen.

The UAE and other nearby countries have all already concluded contracts to buy even more arms and weapons systems from major defense companies over the next few years. This points to a continuing upward trend of global arms imports.

In the past five years, India became the world’s top-ranking purchaser of major arms by volume. Indian arms imports accounted for 15% of the global total from 2010-2014, making it the largest buyer by a wide margin.
From 2005 to 2009, this position was held by China.

70% of India’s arms purchases over the past five years were from Russia, which has traditionally been India’s top arms provider. Another 12% of India’s arms imports came from the United States and 7% from Israel.

The United States is pushing hard to make more sales to India. Meanwhile, in the spring of 2015, France proposed a major deal to sell 36 fighter jets to India.

India’s Prime Minister Narendra Modi has put emphasis on his country becoming a major player in the global arms export market itself. So far, efforts to manufacture high-end major weapons systems, like aircraft and warships, have been unsuccessful. Joint production partnerships could provide the answer.

India’s government is committed to obtaining more arms to balance the armed forces of neighboring China and Pakistan. India’s major arms imports from 2010 through 2014 were three times greater than arms imports to those two neighboring countries over the same period.

Saudi Arabia accounted for 5% of global deliveries of conventional weaponry during 2010-2014.

China is the only country to appear on both top-five lists of arms importers and arms exporters.

UAE imports most of their major arms – particularly aircraft – from the United States and Europe.

Saudi Arabia accounted for 5% of global deliveries of conventional weaponry during 2010-2014.

China is the only country to appear on both top-five lists of arms importers and arms exporters.

UAE imports most of their major arms – particularly aircraft – from the United States and Europe.