The upright and welcoming jewel of Southeast Asia. 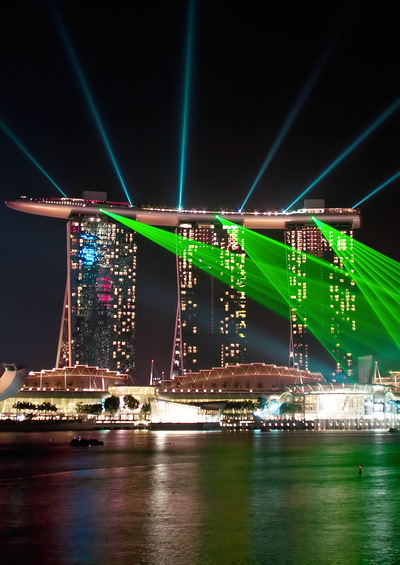 Singapore, a tiny city-state of some five million, is enormously successful economically — the “Switzerland of Southeast Asia.” Spotlessly clean, the city bristles with skyscrapers.

The Marina Sands Hotel is one of the most stunning, with three immense glass towers joined at the top by an enormous concrete “boat” capped by a swimming pool. Day and night hundreds of commercial ships chug by.

Next to the hotel is one of Singapore’s immense luxury malls — miles of glistening underground corridors in which to lose one’s way while being fed “classical Muzak.”

At last: Here is an information desk! How do I get back to the hotel?

With Dvorák’s Valse Lente in the background, I follow the uniformed lady’s directions: “Make a right turn at Chanel, walk past Tiffany, then turn left and you will see the escalator next to Rolex.” Not one bookstore to be seen.

Decades of consistent government efforts turned a poverty-stricken swamp into the most prosperous nation in Southeast Asia.

Government is free of corruption. Public services work to perfection. The subway system serves over 100 stations, mostly with driverless trains.

The airport is a model to the world: bowls of free candy while passengers wait for immigration officers to stamp their passports.

All services are efficient and courteous, whether private or government-run. The search for perfection sometimes does verge on the compulsive:

My taxi driver regrets that he can’t afford to take his family to the Singapore Flyer — a giant Ferris wheel — but at least his daughter and son are able to attend university. They are studying mechanical engineering and biochemistry. Upward social mobility is alive and well.

Most Singaporeans are scrupulously honest. I had dinner with a local friend at a packed curbside restaurant. We secured a table, then had to thread our way to the counter through a press of people, there to stand in line and order.

I suggested she go first while I held the fort, fearing the table would be lost. She put her bag on the table as a marker: “No worries, it will be there when we return.” And so it was.

Corrective Work Order, commonly known as CWO, is one of the two penalties (the other, a fine of up to $1,000) to be meted out to people who are caught littering. Repeat “litterbugs” are sentenced to cleaning up specified locations while wearing a bright green luminous vest bearing the words “Corrective Work Order.”

Should a tourist drop a scrap of paper in a public place he or she can expect someone to pick it up and ask politely: “I believe this is yours?” It is illegal to walk around one’s house naked because that is considered a form of pornography.

Some elevators are equipped with Urine Detection Devices. When triggered, they set off an alarm. Once the alarm goes off, the doors close until the police arrive and arrest the perpetrator.

Some judicial practices hark back to the days of Sir Stamford Raffles or Queen Victoria. Quoth Wikipedia: “Caning is a widely used form of legal punishment. There are mandatory death sentences for certain drug offenses.”

Absurdly, attempted (i.e., failed) suicide is a criminal offence punishable with jail — yet the rate of “successful” suicide is very high.

Thank goodness not everything is orderly and antiseptic.
Lau Pa Sat, a popular old market (today crossed with a food court), occupies a whole street blocked to traffic. It is lined with 30 or 40 stands, each offering different dishes.

No sooner are we perched on our plastic stools at a dimly lit table, than swarms of servers fall on us from all directions, proffering garish pictures of hot Malay dishes and competing loudly for us to order. Wizened Muslim elders go around selling paper napkins.

Servers descend on us again like whirling dervishes, bearing a confusing multitude of exotic dishes which we can’t possibly be expected to remember having ordered (or not), each insisting on immediate payment.

In the midst of this Brownian motion, unable to keep track of what has and has not been paid for, ten-dollar bills fly hither and thither.

Amidst this chaos, the “beer girl” plies her trade, working the street slowly from end to end; miss her, and you won’t get another beer before she has taken care of another hundred or so customers on her beat.

Fortunately, the food is excellent.

Decades of consistent government efforts in Singapore turned a poverty-stricken swamp into a prosperous nation.

Singapore shines as the upright and welcoming jewel of Southeast Asia.

Singapore bristles with skyscrapers standing as testaments to the success of the “Switzerland of South East Asia.”

Decades of consistent government efforts in Singapore turned a poverty-stricken swamp into a prosperous nation.

Singapore shines as the upright and welcoming jewel of Southeast Asia.

Singapore bristles with skyscrapers standing as testaments to the success of the “Switzerland of South East Asia.”