Could the worst of the fighting be over? 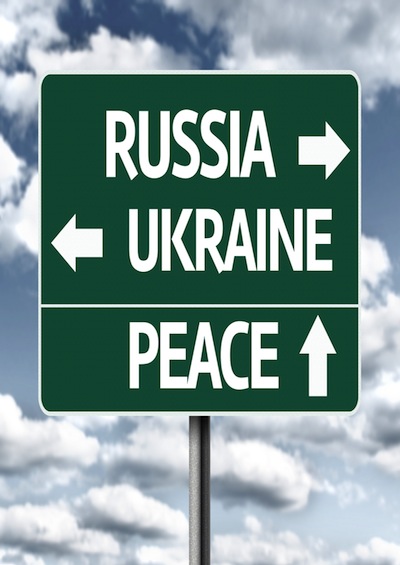 According to Ukrainian President Poroshenko, he has agreed with Russian President Putin on a permanent ceasefire. This looks suspiciously like a Russian move to thwart the new sanctions that the EU wants to impose if Russia does not scale back its aggression against Ukraine by the end of this week.

In the past, Russia has not stuck to previous agreements to end the conflict, such as the Geneva accord struck just before Easter. But faced with a threat of a tougher Western response, there is at least some hope that, this time, Putin does stop and that the conflict can be frozen.

If so, this would allow business confidence in core Europe to start rebounding in a month or two, heralding a return to significant growth in the Eurozone at the turn of the year 2015, with a chance of modest growth in the fourth quarter already. This would benefit Germany in particular which, unlike Spain, has been hit hard by the Putin shock.

Remember the backdrop: Russia is a big heavily armed nuclear power and Ukraine is a medium-sized lightly armed country. Ukraine had handed over its post-Soviet arsenal of nuclear weapons to Russia in the early 1990s in return for Russian and Western guarantees of its territorial integrity.

Russia has grossly violated international law and that accord. In military terms, Russian “volunteers” can conquer and hold any part of Ukraine that Russia wants to, if Putin is ready to pay the political and economic price for it.

As in the case of the Soviet invasions of Hungary in 1956 and Czechoslovakia in 1968, the West cannot intervene with military force. That Russia could dictate the facts on the ground has been clear from the beginning with the takeover of Crimea.

By massively stepping up its support for the Russian-led irregulars some two weeks ago to what is now a thinly disguised invasion of Donbass, Putin had de facto rejected a Berlin-led offer of a face-saving way out for him.

Judging by its actions, Russia has apparently chosen to carve a Transnistria-style bandit fiefdom out of parts of Ukraine. In military terms, Russia can draw the armistice line and hence the border of that fiefdom wherever it chooses to do so.

With their military advance in the last few weeks, the pro-Russian forces seem to have drawn such a line. They have apparently conquered almost all Ukrainian territory to the South and East of Donetsk and Luhansk with access to the Sea of Azov.

Some reports suggest that the Russian “volunteers” are poised to bring the airport of Donetsk under their control. In other words, they now seem to control a significant and contiguous territory for their bandit fiefdom.

Even if the ceasefire holds for now, will Russia be content with the extra autonomy that Kiev can offer for Eastern Ukraine? Or will Russia demand that Kiev recognize a de facto separation of the region occupied by the pro-Russian forces from Ukraine?

Will Russia go further after a break in the fighting, using any flimsy pretext possibly to conquer a land corridor all the way to occupied Crimea?

Can Ukraine, with a parliamentary election on October 26, accept that its Donbass region may turn into a de facto Russian-controlled bandit fiefdom like Transnistria in Moldova and Abkhazia plus South Ossetia in Georgia?

Or will Kiev try to re-establish its control over the region although, in military terms, such an attempt would probably be futile against Russia’s military might?

The situation remains highly dangerous. Russia may not implement the ceasefire. The war could simply go on or easily erupt again at any time. Even if the fighting were to cease and the West would not impose further sanctions, the long-term impact of Russia’s almost open aggression would remain serious.

After all, by annexing Crimea at gunpoint and almost openly invading Eastern Ukraine, Russia has breached international law in a way Europe has not seen in many decades. Over time, Russia will pay a heavy price for that, while the European economies will not be affected for long.

But if Putin now decides that he has conquered enough, and that conquering more would not be worth the costs of an accelerated Russian economic decline caused by further capital flight and disruptions in economic and financial relations with the West, at least European economies could start to gradually rebound from the Putin shock in a few months.

Russia has breached international law in a way Europe has not seen in many decades.

Russia may not implement the ceasefire. The war could simply go on or easily erupt again at any time.

Russia will pay a heavy price for its breach of law, while the European economies will not be affected for long.

Russia has breached international law in a way Europe has not seen in many decades.

Russia may not implement the ceasefire. The war could simply go on or easily erupt again at any time.

Russia will pay a heavy price for its breach of law, while the European economies will not be affected for long.