A report from Kiev on corruption and hopelessness. 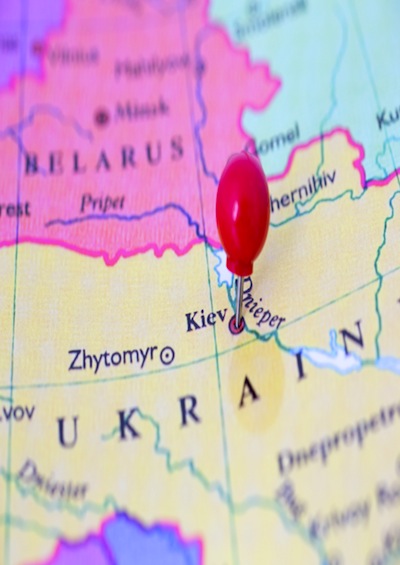 Kiev had an eventful week. On Wednesday, a global cyber attack, launched from Ukraine, spread like wildfire globally. While all of this was happening the head of the Kiev regime’s counter-intelligence was blown to pieces as his car passed through an intersection in the center of the city.

The default reaction was that this was another episode in the Kiev-Moscow-US intrigue. Others on the ground say it was more likely linked to corruption related to arms sales. Will we ever know…

The latest polls here show that the president–whom everyone here calls “Porky”–is at single-digit support. In comparison, Trump at 38% is doing rather well.

It is debatable, I suppose, and we likely will never know, but many here consider the current regime the most corrupt ever.

They are spending oodles on defense, and several persons have told me that it is common knowledge that the “summit” creams 7-10% off the top…7-10% of a billion here, a billion there, another billion over there…after a while it becomes real money!

You reap what you sow

They say that countries get the politicians they deserve. If that is true, you have to ask yourself, what the Ukrainians did to deserve what they have experienced for the last 27 years, indeed for much longer…

Today, there is a vast sense of desolation, of resignation, among some of nihilism, and among others a view that there is nothing to do, no hope for anything, so live now, intensely, or leave.

At a museum of contemporary art, there is an exhibition which pretty much expresses these sentiments. A video that plays non-stop with the word FUTURE in big black capital letters across the screen.

Two of the letters of FUTURE have toppled over. What remains of the word is on fire. That sort of sums up how many here see their future.

In another room, there is an installation called “Wasted Veteran.” The room is entirely white, and empty, save for a few pieces of military gear–so obviously obsolete–strewn about the floor, and a man, standing alone, wearing combat fatigues, and who is starring straight into the corner, into nothingness.

The sense of waste, of uselessness, of betrayal is crushing.

Then there is an entire room focused on Chernobyl; the photos and the texts are of pure desperation. The cyber attack earlier in the week, perhaps right on cue, shut down all of the monitoring equipment at Chernobyl…

A few days back, the EU granted visa free travel to Ukrainian passport holders. Watch for a mass exodus of the young and the bright. And that can’t be good for this place.

Meanwhile, the mob rules still over Odessa and its ports, distribution point to the “West” of some 90% of the heroin produced in Afghanistan.

After the United States has led the war there for a decade and a half, this year the poppy fields are at their most productive ever, with a record bumper crop on the cards. Odessa is also the plaque tournante of the illicit global arms trade…

One has to feel for the Ukrainian people: The civil war, the vast corruption, the deep and ever more insurmountable divisions in the country, the flight of young people, the desperation of the armies of unemployed, the repeated devaluations, the crash of real income, the embezzlement of bank deposits, the fraudulent loans, the theft of state assets…

It is estimated that over $1 trillion of state assets have been stolen, and there has not been one whimper out of the IMF, the EBRD, nor from the governments of Western Europe, the United States or Canada.

Not one peep, like setting a condition for IMF funding of recovering 20% of stolen assets.

It is said that a good place to start looking for the owners of some of these assets would be the Kiev government cabinet and parliamentary stand-ins for some of the coterie of vastly wealthy oligarchs who effectively run the country.

The cultural, political and social cauldron which is Russia-Ukraine is far beyond me to understand. A visit to the Bulgakov museum is expressive of this.

There is vast pride in the man and his work. Yet, he was Russian, wrote all of his books, plays, novellas in Russian, was born to an ethnic Russian family, was a descendant of a Russian orthodox priest.

Yet, none of that is mentioned, and only emerges when one probes the guide with questions…

Yet spend but a little time, for example, in a Karaoke bar, or a café, and virtually all of the songs which are belted out are Russian songs, or songs sung by Ukrainians in Russia. Complex, complex, complex.

It could be so different

Ukraine’s destiny would surely be very different it there was a mountain range somewhere between the Franco-German border and Moscow, and if Crimea did not offer the only all year ice free maritime port for the Russian navy.

One one hand, the geopolitics are what they are and point to a real politik resolution, similar to what Kissinger has several times suggested, and with which Moscow would likely be happy to accept.

On the other, there is a people, which have suffered so much, and continue to be trampled on by their own politico-economic oligarchic caste, as well as by their neighbours.

But there is no doubt, Kiev is a European city, just as are Warsaw and Riga. The city continues to have one of the best ballet troops in the world, and a very active cultural life.

Kiev is such a pretty city, especially under the cloudless sky of today, as the dog days of summer begin.

On Wednesday, a global cyber attack, launched from Ukraine, spread like wildfire globally.

It is debatable, but many in Ukraine consider the current regime the most corrupt ever.

They say that countries get the politicians they deserve. If that’s true, you have to ask what the Ukrainians did.

The EU granted visa free travel to Ukrainian passport holders. Watch for a mass exodus of the young and bright.

There is no doubt, Kiev is a European city, just as are Warsaw and Riga.

On Wednesday, a global cyber attack, launched from Ukraine, spread like wildfire globally.

It is debatable, but many in Ukraine consider the current regime the most corrupt ever.

They say that countries get the politicians they deserve. If that’s true, you have to ask what the Ukrainians did.

The EU granted visa free travel to Ukrainian passport holders. Watch for a mass exodus of the young and bright.

There is no doubt, Kiev is a European city, just as are Warsaw and Riga.

The Handover of Hong Kong Revisited