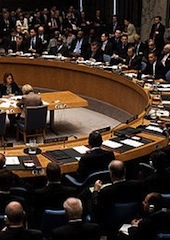 When Russian President Vladimir Putin published his September 12 op-ed article in the New York Times, attention largely centered on his comments on American exceptionalism. In the United States, he was, for the most part, castigated for arguing that that Americans’ belief in their own exceptionalism was not shared by the rest of the world: In other words, the belief itself was “exceptional.”

Almost no attention as paid to Putin’s actual message. His message was both constructive and surprising, even though it runs counter to the prevailing U.S. narrative: Russia now takes the United Nations Security Council far more seriously than the U.S. government does.

Putin drew attention to a crucial reality of the 21st century world that is still largely overlooked: Global peace has been preserved for the 68 years since the end of World War II to a significant extent because of the veto power welded by the five permanent members of the UN Security Council.

The consequent unwillingness of countries to defy this highest expression of international law and go to war without the prior approval of any UNSC resolution does have its benefits, especially against trigger-happy American Senators who are always trying to raise their public profiles by calling for the bombardment of some country.

The UN Security Council system has proven vastly more effective than the old League of Nations system after World War I did. World War II broke out in Europe in September 1939 less than 21 years after the November 11, 1918 Armistice ended “the War to End All Wars” in Europe.

In Asia, World War II in reality broke out more than two years earlier, with the Imperial Japanese Army’s drive up the Yangtze River Valley to conduct its notorious Rape of Nanking in the summer of 1937. More than three quarters of a million Chinese – almost all of them innocent civilians and with an exceptionally high proportion of women and children – are estimated to have died in that single campaign.

Yet today, more than three times as much time has passed in both Europe and Asia since the 1945 Potsdam conference settled affairs between the victor nations of World War II.

The main reason for this has been the continued agreed commitment of the two thermonuclear superpowers, the United States and the Soviet Union, later Russia, to avoid thermonuclear war and keep the peace. But the legal structure of the UN Security Council has been a crucial mechanism for this enormous achievement so important to the entire human race.

The American public and its leaders, however, do not so much take this crucial UN role curiously for granted as appear to be willfully ignorant of it.

American conservatives overwhelmingly view the UN with hatred, suspicion and contempt. They regard it as the embryo of a future world government that is endlessly scheming to strip Americans of their national sovereignty and cherished constitutional freedoms.

The fact that the UN is nothing of the kind, and is more often than not woefully inept at organizing even its own self-administrative activities is lost on them.

American liberals tend to revere the UN in theory, while recognizing its ponderous administrative incompetence in practice. They are ill at ease with the UN Security Council’s very successful realpolitik role in serving as a permanent negotiating chamber between the superpowers, including China.

Thus, President Putin did not say anything new or surprising in his insistence that interventions by superpowers in other countries should only take place with the express sanction of the United Nations Security Council.

This has been a repeated theme of his public statements since he first became president of Russia. When he wrote, “The United Nations’ founders understood that decisions affecting war and peace should happen only by consensus,” this was pure vintage Putin.

But it was much more than that: It was also pure vintage Russian foreign policy.

Remember the Kosovo crisis of 1998 and 1999? At the time, the Russian argument was that if the Clinton administration pushed ahead with military intervention – without UN authorization – to drive the Serbs out of Kosovo, it would shatter a crucial principle of international law. That principle had maintained world peace between the superpowers and all other major nations for 53 years since the end of World War II.

U.S. policymakers and pundits alike shrugged off these Russian arguments. The Kosovo intervention went ahead and was widely popular in the United States after its successful conclusion.

From an American perspective, it continued the long run of such swift, supposedly “surgical” U.S. military operations against tiny and easily conquered enemies that had started with the invasion of Grenada in the Caribbean in 1983. Other examples include Panama in 1989, Iraq in 1990 and 2003 and Afghanistan in 2001. However, the last two examples showed it was far easier to bomb and dismantle a country’s defenses than to occupy and pacify it.

The fundamental Russian concern over Kosovo in 1998 was exactly the same as Putin’s argument against unilateral U.S. intervention in Syria today.

Since the end of World War II, the fundamental reason world peace has been maintained has been the veto power of the five main global nations – the United States, the Soviet Union/Russia, China, Britain and France – in the UN Security Council. This is the fundamental brake, or safeguard, against the irresponsible and reckless use of unilateral armed force by any single great power.

However, as Putin pointed out in his New York Times op-ed article, this crucial Security Council veto has been gravely weakened because “influential countries bypass the United Nations and take military action without Security Council authorization.”

Russia has, of course, a strong self interest in preserving its veto power through the UNSC but that does not make Putin’s defence of it stupid or wrong.

Above all, the United States should not consider intervening in Syria unless it can privately broker an agreement with Russia and China not to use their Security Council veto votes to block a UNSC resolution authorizing any such action.

Nations which regard themselves – and are regarded by others – as being senior partners in keeping the global peace will be much more unwilling to break it.

The UN Security Council is the brake against reckless use of unilateral armed force by a great power.

Russian self interest in preserving the Security Council does not make Putin’s defence of it stupid or wrong.

Nations accepted as senior partners in keeping global peace will less willing to break it.

US intervention in Syria isn’t in America’s national interests. Lawmakers would do well to heed Putin’s warning.

The UN Security Council is the brake against reckless use of unilateral armed force by a great power.

Russian self interest in preserving the Security Council does not make Putin’s defence of it stupid or wrong.

Nations accepted as senior partners in keeping global peace will less willing to break it.

US intervention in Syria isn’t in America’s national interests. Lawmakers would do well to heed Putin’s warning.