Water: A Big Challenge for Africa

Can Africa provide clean, safe water for its urban and suburban communities? 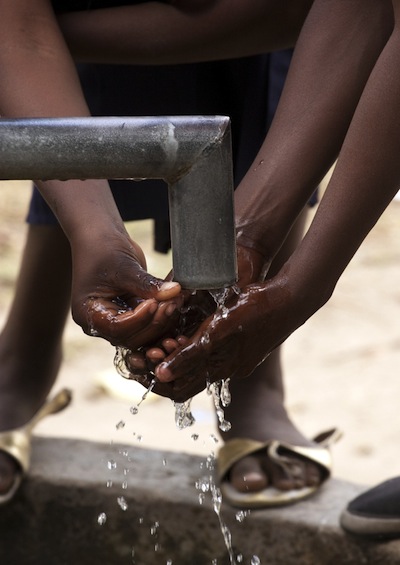 The rapid urbanization of our planet, which began in the 19th century, is one of the most notable changes in modern times. While in 1950, 29% of the global population lived in cities, that figure is estimated now at 50%. By 2030 it will reach 61%.

In Africa, urbanization experienced a rapid shift from 15% in 1950 to 41% today. It is estimated that by 2030, 54% of the population of that continent will be living in cities.

Not only are more people living in cities, but the cities themselves are also becoming larger and more densely populated. This situation poses unique problems related to the provision of water, sanitation and a healthy environment.

Africa has now 19 cities with populations of more than one million inhabitants. Because of slow economic growth, lack of effective development policies and limited resources, the development of infrastructure has not kept up with the increasing needs for shelter and services in growing urban populations.

At the same time, urban settlements in the developing countries are growing five times as fast as those in the industrialized countries.

This explosive growth of urban populations has resulted in African cities having overcrowded, informal settlements characterized by inadequate housing and poor infrastructure such as water supplies, sanitation and waste management services.

The consequence is that most cities, both in developed and developing regions, are showing trends towards segregation rather than social integration between rich and poor neighborhoods.

This is the case for many African cities, where local governments have been unable to keep pace with change and, as a consequence, have also been unable to provide inhabitants with proper infrastructure related to the provision of water and the collection, transportation, processing and disposal of waste materials.

In developing countries with economies under stress, waste management is a problem that often endangers health and the environment. In addition, this is given low priority by governments often besieged by other problems such as poverty, hunger, children’s malnutrition, water shortages, unemployment and even war.

Water supply, sanitation and health are closely related issues. Poor hygiene, inadequate management of liquid or solid waste and lack of sanitation facilities are contributing factors to the death of millions of people in the developing world, due to diseases that are easily preventable.

For example, lack of sanitation and inadequate disposal or storage of waste near houses can provide habitats for vectors responsible for several infectious diseases, such as amebiasis, typhoid fever and diarrhea.

Uncontrolled and inadequate landfills are a danger to the environment and also a health risk to the population, since they may lead to contamination of water and soil.

On a global level, more than 5 million people die each year from diseases related to inadequate waste disposal systems.

Contamination of water leads to a whole range of diarrheal diseases, including cholera, which kills 1.8 million people worldwide. An estimated 90% among them are children below five, mainly from developing countries. Most of the burden can be attributed to unsafe drinking water, inadequate sanitation and poor hygiene practices.

According to UNICEF, Infant Mortality Rates (IMRs) are almost always higher in poor urban areas than the national average and than those in rural areas.

A great proportion of the high mortality among the children of the urban poor can be attributed to diseases common in urban areas such as diarrhea, tuberculosis and parasitic diseases (intestinal worms) that are frequently associated with lack of safe water and sanitation. Malnutrition in children is often a consequence and a complicating factor.

Germs, particularly those present in water, food or on dirty hands are the most frequent cause of sickness worldwide. The lack of safe water and sanitary facilities are made worse by ignorance among the general population, particularly mothers, about the connection between dirt, germs and childhood diarrhea.

Experience has also shown that provision of clean water by itself only leads to minor health improvements. The most important factor is personal hygiene, with adequate public sanitation and clean water as additional, supporting components.

Several naturally occurring and human-made chemical substances present in drinking water can have a serious effect on health, particularly in high concentrations. Among chemicals that can be dangerous at elevated levels are fluoride, arsenic, lead, cadmium, mercury, nitrates and pesticides.

All these factors stress the need to implement policies that ensure the provision of safe water to the population, particularly in marginal areas lacking basic health and social services.

Despite progress, however, many Sub-Saharan countries will find it difficult to reach the Millennium Development Goals (MDGs) set for 2015, particularly MDG 7, which stipulates to halve, by 2015, the proportion of people without sustainable access to safe drinking water and basic sanitation.

According to the German Technical Cooperation (GTZ), official data on the progress in water and sanitation in sub-Saharan countries do not reflect the real situation on the ground. Coverage is overestimated in urban and rural areas.

The Sustainable Sanitation Alliance has defined a set of conditions to address the shortcomings of previous efforts to improve sanitation. It emphasizes that capital-intensive solutions tend to be costly, energy-intensive and inflexible, failing to reach large proportions of the new slum poor.

Importing sanitation models from the industrialized world and trying to implement centralized “one-size-fits-all” solutions is in many cases neither appropriate nor sustainable.

It is necessary to overcome the lack of integration between the various components of environmental sanitation: excreta, domestic and industrial wastewater, solid waste and storm water, which are often run by separate agencies or institutions. Better use of synergies can lead to more sustainable and cost-effective solutions.

To achieve adequate sanitation, it is necessary to convince local authorities, utilities and donors that there should be commitment and participation by all stakeholders. Several of these conditions are also applicable to improving the provision of safe water.

In both cases, it is important to provide incentives for good practice. One such incentive could be increased financial aid to municipalities that succeed in implementing effective sanitation and safe water programs.

It is also important to move from implementing a strategic planning process in a pilot municipality to disseminating results (through workshops, publications, exchange visits), followed by changes in legislation and procedures as necessary to replicate the process on a wider scale.

The constraints for improvement are neither financial nor technical; they are political, social and managerial.
At the same time, local authorities have to empower people through self-reliance and to support individuals and families in their efforts. Water-sector professionals, too, should combine their technical skills with the ability to communicate to those they serve.

Better water and sanitation services can improve everybody’s health and well being. The seriousness with which we approach this task will be a measure of our commitment to building communities better prepared to face the challenges related to sustainably securing potable water and adequate sanitation.

Can Africa muster the seriousness to build communities prepared to secure potable water and adequate sanitation?

Africa has now 19 cities with populations of more than one million inhabitants.

Can Africa muster the seriousness to build communities prepared to secure potable water and adequate sanitation?

Africa has now 19 cities with populations of more than one million inhabitants.

Cycling in Eritrea: Five Photos That Capture a National Obsession