Stability through strength was and is a phantom concept

By Richard Phillips and Stephan Richter 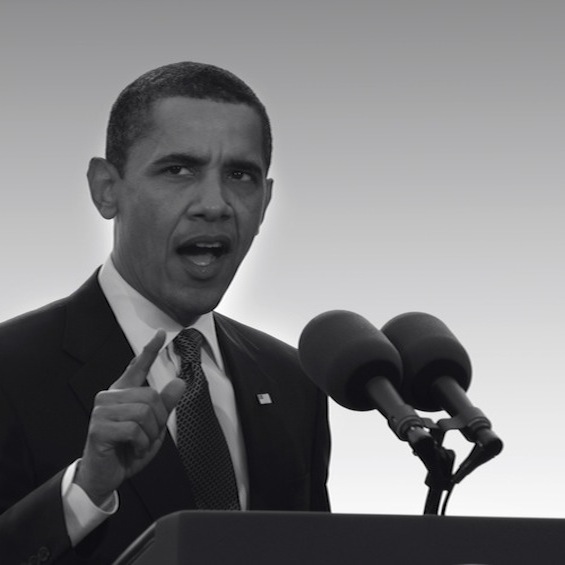 The world is going to hell in a hand basket — and it is all Barack Obama’s fault. So says the conventional wisdom emanating from the right wing of the U.S. political spectrum.

According to the practically unanimous view of right-wing politicians and pundits, President Obama is much too soft in his prosecution of U.S. foreign policy. This purported weakness has, according to the right, left the world leaderless, rudderless and in utter chaos. The U.S.-led global order that had kept the world stable from 1948 right through January 20, 2009 is gone, they say.

To be sure, President Obama has provided cannon fodder for this point of view. Statements like “we don’t have a strategy,” “hitting singles and doubles” and “don’t screw up” have given conservatives a target-rich environment.

But politically inept remarks should not be construed as foreign policy ineptitude. Nor should it evoke nostalgia for the good old days when the United States was the global sheriff and could enforce the peace through the barrel of its six-shooter. Stability through strength was and is a phantom concept.

To start with, such a read of recent American history is born of willful ignorance, which seems to be the U.S. right wing’s chief stock in trade these days.

It is evident in the right’s view of just about every facet of U.S. politics and society, whether science, the economy, health care or immigration. Reality is ignored and facts are cast aside in order to promote a worldview that is, yes, willfully ignorant.

The fact is that the world has never been a stable place. Perhaps the shared hegemony of the United States and Soviet Union, which was fostered by the two hegemons’ nuclear arsenals, prevented cataclysmic eruptions like the two European wars of the 20th century. But bristling nuclear arsenals on hair triggers is not what any rational person would call stability.

If the right were to remove their rose-colored glasses for just a moment, they would see just how chaotic their stable world order was.

Take Georgia, Crimea, Ukraine and the Baltic countries. It is true that in the past Russia would never have bullied them the way it does today. But that is because Russia didn’t have to bully them. Russia occupied them, along with Poland, Hungary, Czechoslovakia and the rest of Eastern Europe.

By the same token, the right tends to ignore bloody proxy wars fought by the cold war superpowers in Korea, Vietnam, Afghanistan, the Congo and elsewhere. These conflicts were hardly emblematic of stability through strength.

Reagan failed no less than Obama

Furthermore, the heroic right wing mythology conveyed to Ronald Reagan did nothing to dissuade the Soviet Union from prosecuting a protracted war in Afghanistan, nor did it stop the imposition of martial law in Poland in December of 1981.

Nor did Reagan’s muscular foreign policy deter terrorists from attacking the Beirut barracks in 1983, a brutal act that claimed the lives of nearly 250 U.S. Marines and caused the United States to pull out of Lebanon in apparent defeat.

Since the end of the Cold War, the world has been scarred time and again by instability and aggression.

America’s “strong” foreign policy, for example, did little to stop Communist Chinese tanks from rumbling into Tiananmen Square in 1989.

It did nothing to keep the peace in 1990, when Saddam Hussein thumbed his nose at President George H.W. Bush and invaded Kuwait.

It has done nothing but fail time and again in bringing about a resolution to the Israel/Palestine conflict.

By the same token, U.S. foreign policy has hardly impeded Iran and North Korea from pursuing their nuclear ambitions – both countries made their biggest gains in this area while the bellicose George W. Bush Administration controlled the levers of geopolitical power in Washington, D.C.

Perhaps most important, Al Qaeda and the attacks of 9/11 were given life through the muscularity of U.S. foreign policy in Afghanistan, Pakistan and Sudan.

The bottom line is this: The conservative right is being — yes, here it is again – willfully ignorant in its assessment of America’s recent geopolitical past. The concept of stability through strength was illusory.

America’s invasion of Iraq exposed the dark underbelly of Middle Eastern society, which is permeated by centuries old ethnic and sectarian divides. In fact, the aggressive post-9/11 foreign policy pursued by the Bush Administration in Iraq gave birth to Al Qaeda in Iraq, which survives today as ISIS.

The Arab Spring in North Africa embraced liberty and overthrew dictators. But would a more aggressive U.S. foreign policy have prevented Libya from devolving into tribal warfare? Perhaps, but at what cost? Certainly, stabilizing Libya would have required long-term military intervention.

In Syria, the Assad regime, père et fils, was never cowed by U.S. power into moderating its cruelly autocratic rule. And the idea that by arming the moderate resistance would have produced a different outcome than is unfolding today is a fantasy.

For starters, it ignores the fact that the Syrian Civil War is a proxy struggle involving Iran, Saudi Arabia, Qatar, Lebanon, Turkey and a host of unaffiliated elements that coalesce around ethnicity, sect or religious fundamentalism.

Barack Obama is pursuing a cautious and well-calculated foreign policy that recognizes the complexity of the confrontations and rivalries taking place throughout the world. It acknowledges the mistaken postures and interventions of the past and tries to recalibrate their tone and tenor for a new future.

Obama’s policies are not based on fantasy, nor do they seek legitimacy through willful ignorance. They are based on an honest realism that recognizes America’s limitations in an increasingly globalized and tech-savvy world.

In contrast to self-absorbed dreamers, any realist understands that the common threats of terrorism, climate change and pandemic form the basis for new interactions among nations. They make the old school foreign policy prescription of might makes right quaintly obsolete.

Politically inept remarks by Obama should not be construed as US foreign policy ineptitude.

As much as conservatives love the idea, stability through strength was and is a phantom concept.

Willful ignorance is the US right wing’s chief preference, whether in science, the economy, health care or immigration.

Politically inept remarks by Obama should not be construed as US foreign policy ineptitude.

As much as conservatives love the idea, stability through strength was and is a phantom concept.

Willful ignorance is the US right wing’s chief preference, whether in science, the economy, health care or immigration.